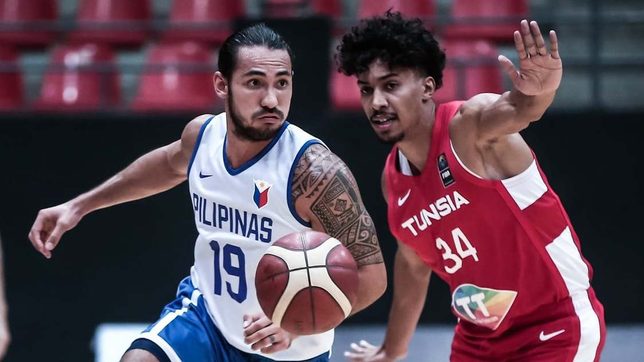 REDEMPTION. Tunisia avenges its loss to Gilas Pilipinas with the bronze medal to boot.

Gilas Pilipinas dropped its third straight game to end its King Abdullah Cup campaign in Jordan as Tunisia secured the bronze medal with an 80-68 win on Sunday, August 1.

After once being in the running for the first seed, Gilas ultimately settled for fourth place with a 2-4 record as the championship is set to be contested between Egypt and host country Jordan, which beat the Filipinos twice in two days to get there.

Young forward Carl Tamayo led Gilas in scoring with 14 points off the bench plus 6 rebounds, but was also a game-worst -28 and triggered the Tunisians’ final run in the fourth quarter with an unsportsmanlike foul on Omar Abada at the 4:20 mark.

From being just up 3 points, 69-66, Abada’s free throws set off an 11-2 finishing kick highlighted by 5 quick points from Jawher Jawadi, who finished with a game-high 21 points off the bench on a near-perfect 8-of-9 clip and a pristine 3-of-3 from three.

Abada finished right behind Jawadi with 19 markers and 6 assists.

Although Gilas waxed hot out of warmups with a 7-0 start that carried over to a 14-8 lead midway through the first quarter, Tunisia seized complete control of the game with a huge 26-6 response bridging through the 5:49 mark of the second for the 34-20 lead.

The Tunisians kept the pressure up and peaked with a 16-point gap, 64-48, with 1:56 left in the third frame before Gilas started a fourth-quarter rally that ultimately fell short.

SJ Belangel was the only other Filipino in double-digit scoring with 12 points, while Isaac Go, who started at center for the benched Ange Kouame, chipped in 9 markers off 3-of-6 triples.