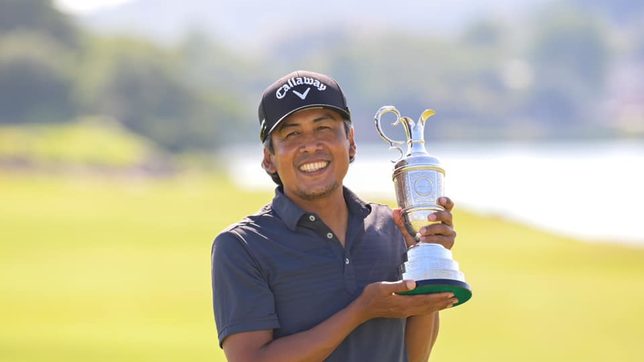 CHAMPION. Juvic Pagunsan celebrates with his tropy after also booking a slot in this year’s British Open.

Juvic Pagunsan ruled the 2021 Mizuno Open to capture his first Japan Golf Tour title on Sunday, May 30 at the Setonaikai Golf Club in Okayama, Japan.

The former Asian golf tour top earner closed out his title-winning campaign with a 68 to finish 17-under 199.

The tournament was shortened to 54 holes due to inclement weather earlier in the week.

The victory also secured Pagunsan a ticket to the 2021 British Open at Royal St. George’s Golf Course in Kent, England from July 15 to 18.

Japanese Ryutaro Nagaro, who settled for a runner-up finish, trailed by three strokes despite hitting a 65 in the final round for a 14-under 202.

Pagunsan’s title comes after a second-place finish behind Rikuya Hoshino in the Asia Pacific Diamond Cup in Kagayama, Japan last May 16. – Rappler.com