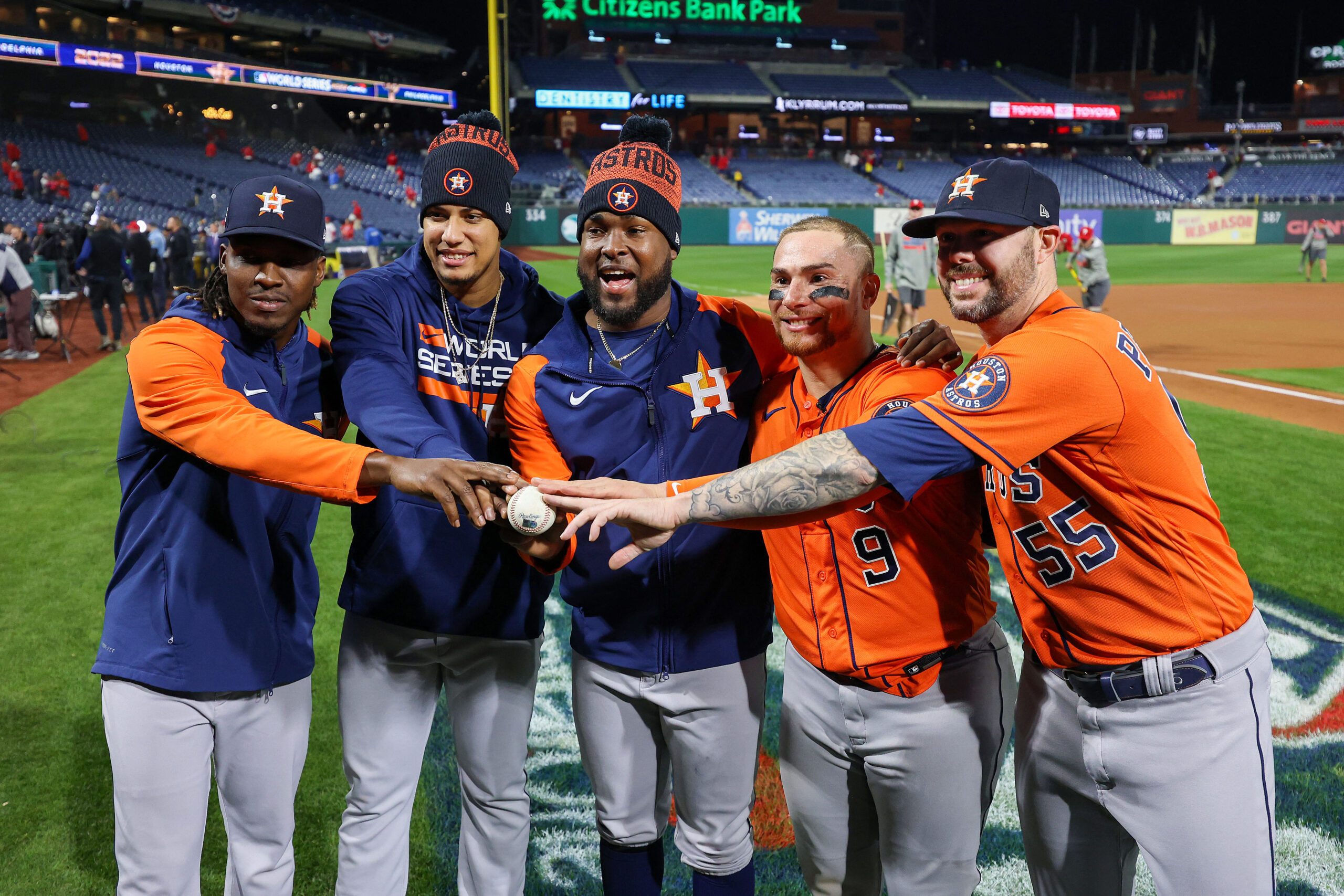 HISTORIC. Houston Astros (from left) relief pitchers Rafael Montero and Bryan Abreu, starting pitcher Cristian Javier, catcher Christian Vazquez, and relief pitcher Ryan Pressly pose for a photo after throwing a combined no-hitter in a victory over the Phillies in Game 4 of the World Series.

Houston Astros pitchers combined to throw just the second no-hitter in World Series history to beat the Philadelphia Phillies, 5-0, in Game 4 and even the series at 2-2 on Wednesday, November 2 (Thursday, November 3, Manila time).

Starter Cristian Javier went six innings and struck out nine, Bryan Abreu struck out the side in the seventh, Rafael Montero threw a perfect eighth, and Ryan Pressly closed out the third no-hitter in MLB postseason history.

Javier rushed to the mound and lifted Pressly in the air in celebration after third baseman Alex Bregman fielded a tough ground ball to seal the win.

Don Larsen threw a perfect game in the 1956 World Series and the Phillies’ Roy Halladay tossed a no-hitter in the 2010 Division Series in a game that was also played at Citizens Bank Park in Philadelphia.

“My parents told me I was going to throw a no-hitter and thanks to God I was able to accomplish that,” Javier, a native of the Dominican Republic, said through an interpreter.

“They told me that last night. And I said I was going to stay positive and with God helping us, we can do it.”

Astros catcher Christian Vazquez said the win was even more special since it means the series is now guaranteed to return to Houston for a Game 6 on Saturday and, if necessary, Game 7 on Sunday.

“It was special, everybody did a great job,” Vazquez said.

“We’re happy to split the series. Now we can finish it off at home.”

Game 5 is on Thursday in Philadelphia.

Javier became the first starter to throw at least six no-hit innings in a World Series game since the New York Mets’ Jerry Koosman in 1969.

Bregman hit a two-run double, Gurriel added two hits and an RBI, and Jeremy Pena had two hits for the Astros.

The Phillies had three walks and two stolen bases, and they stranded a runner at second base in both the second and third innings.

Jose Alvarado relieved Nola in the fifth with the bases loaded and no outs, and he allowed all three inherited runners to score and gave up two runs of his own.

Chas McCormick, Jose Altuve, and Pena each singled to open the fifth before Alvarado took over. Yordan Alvarez was hit by Alvarado’s first pitch to score McCormick for a 1-0 lead.

Bregman followed with a two-run double on an 0-2 pitch, and Tucker hit a sacrifice fly to give the Astros a four-run advantage. Gurriel added an RBI single.

Javier (seven innings), Hector Neris (one inning), and Pressly (one inning) also combined to no-hit the Yankees this year on June 25. The Phillies were no-hit on April 29 in a combined effort by five New York Mets pitchers. – Rappler.com