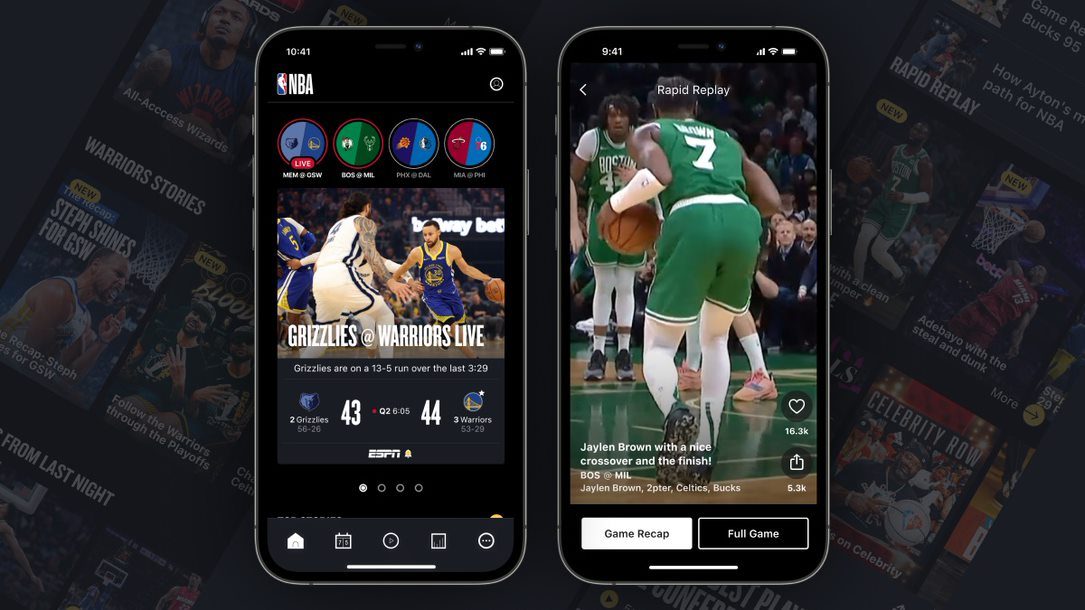 NEW YORK, USA – The NBA launched the reimagined global NBA App, the all-in-one destination for NBA fans of every team, on Tuesday, September 27.

With entirely new personalization features, the NBA App will provide wall-to-wall content from every NBA game and feature social-style vertical video, unprecedented behind-the-scenes access to players and teams, new and existing shows and series, and access to the NBA vault for free.

The NBA App, a product of NBA Digital, the league’s joint venture with Turner Sports, is free to download.

Additionally, the NBA has launched NBA ID, the league’s new global membership program offering fans benefits and rewards from the league, teams and its partners.

NBA ID, which is free to join, will link a fan’s experiences across existing products like NBA League Pass and NBA Pick’Em.

Throughout the season, NBA ID members will get access to new original content and fan favorites from the NBA vault.  Additionally, there will be enhanced members-only experiences from NBA partners, ticket promotions, prizes through predictive and sweepstakes-style NBA Pick’Em fantasy games, voting campaigns and other rewards.

The NBA App is powered by the NBA’s new integrated digital platform, which was built in partnership with Microsoft, the NBA’s official cloud and AI partner.

The NBA App now includes a sleek new design and a first-of-its-kind “For You” experience, with content recommendations based on fan preferences and personalization powered by Microsoft Azure and Azure AI.

Within the app’s “For You” page, fans can tap into a social-like vertical video experience – with vertical scrolling – that features real-time highlights of all NBA games in progress.

The league’s direct-to-consumer subscription offerings – NBA League Pass and NBA TV – will be integrated into the NBA App, giving fans the ability to watch live games and highlights and check scores, statistics and standings, all in one place.

NBA League Pass returns this season with a new bundle and at its lowest pricing ever. For a limited time, the standard package is now available for P499 per month (P2,990 for full season) and the premium package for P650 per month (Php 3,900 for full season). Subscribers will automatically receive the NBA TV direct-to-consumer offering as part of the new bundle.

“Launching our new NBA App and digital platform is a major milestone as we continue to build and strengthen our direct-to-consumer offerings,” said Chris Benyarko, NBA executive vice president, direct-to-consumer.

“We are thrilled to deliver a reimagined product that will enhance and personalize the way NBA fans engage with the league on a daily basis.”

Gameday Experience – Fans will be immersed in game-day content all day long and, for the first time, get live access to streams of all pregame and postgame NBA press conferences and media days from every major event. In addition, NBA ID members will have access to teams’ pregame shows for NBA League Pass games.

Lifestyle – Social-style content series looking at the lifestyle, culture, fashion, music and more around the game and off the court, including NBA Kicks, NBA Fits, Jersey Drop, Ride Along, Celebrity Row and NBA Ink, among others.

“CrunchTime” – A free weekly whiparound show taking fans live to crucial moments of each game and providing real-time updates and analysis, produced by NBA TV and hosted by Jared Greenberg.

“NBABet stream” – A weekly stream produced by NBA TV with betting expert Tim Doyle and a selection of top contributors to provide the latest betting information during live game coverage.

Partner Content – Content produced by popular basketball and sports-highlight creators, including Turner Sports, featuring content from the hosts of “Inside the NBA”, Grant Hill and Greg Anthony, as well as FanDuel, DraftKings, Action Network, Bleacher Report and more.

“Gold Blooded” – A new seven-episode docuseries telling the story of the Golden State Warriors’ journey to the 2022 NBA championship.  Narrated by Andre Iguodala, the series features never-before-seen footage and new interviews with team executives and players, including Stephen Curry, Klay Thompson and Draymond Green.  The first episode is available on the NBA App today.

“Pass the Rock” – Fans will get an exclusive look at the league’s next generation of stars and their lives on and off the court throughout the 2022-23 season.  The multi-part series is slated to begin in late November.

“Inside the App” – An exclusive weekly segment from TNT’s “Inside the NBA” team that will spotlight the hottest storylines and most topical events from around the league.

“NBA Real Training Camp” with the Philadelphia Sixers (October 29) and Dallas Mavericks (October 30) – A special all-access show produced by NBA TV during the opening week of preseason providing exclusive look-ins at the teams’ practices and interviews with players, coaches and front office personnel.

Archived Games – Fans will have access to archival footage from the NBA vault, including 500 of the best classic games in NBA history.  Every NBA Finals game since 2000 will also be available, with more Finals and popular games being released throughout the season.

Archived Series – Documentaries and all-access series from NBA Entertainment’s archives will be available on-demand, including “Dream Team”, “The Doctor”, “Wilt 100”, “The Association”, “Unscripted”, “Inside Stuff” and more.

NBA’s International Games – The NBA App will be the go-to destination for fans to engage with and watch The NBA Japan Games 2022 presented by Rakuten & Nissan (Golden State Warriors vs. Washington Wizards on Friday, Sept. 30 at 6 a.m. ET and Sunday, Oct. 2 at 1 a.m. ET) and The NBA Abu Dhabi Games 2022 (Milwaukee Bucks vs. Atlanta Hawks on Thursday, Oct. 6 at noon ET and Saturday, Oct. 8 at noon ET).