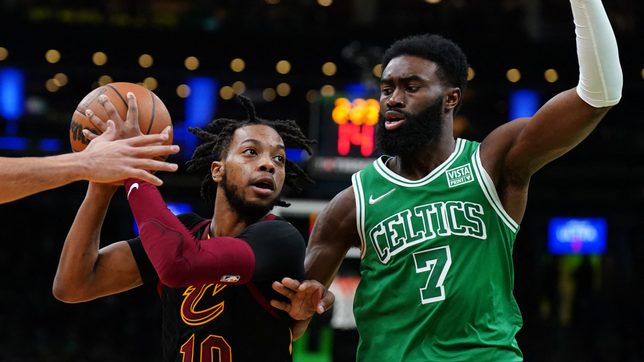 34 POINTS. Jaylen Brown drops 34 over the Cavaliers who were on a six-game win streak.

Jaylen Brown led all scorers with 34 points, Robert Williams III added 21 points, 11 rebounds and seven assists and the Boston Celtics ran past the visiting Cleveland Cavaliers in a 111-101 win on Wednesday night, December 22.

Darius Garland scored 28 points to lead the Cavaliers. Kevin Love contributed a double-double of 18 points and 12 rebounds and Cedi Osman scored 13 for Cleveland, which had won a season-high six straight games.

Both teams were down a handful of players amid the NBA’s ongoing COVID-19 outbreak.

Love started for the Cavaliers after being questionable with a foot injury.

Boston was up 63-48 at halftime and led by as many as 23 points in the third quarter. Cleveland closed the third on a 15-3 run to pull within 85-73 entering the fourth.

Garland’s pull-up jumper with 11:20 remaining brought the Cavaliers within 85-75, but the Celtics scored seven straight points to regain control.

Earlier Wednesday, the Celtics added seven-time All-Star Joe Johnson on a 10-day contract via hardship exception. The 40-year-old Johnson checked in for the first time with 1:57 remaining and made his only shot on a jumper with 23.2 seconds left.

Johnson was drafted by the Celtics with the No. 10 overall pick in 2001, but played just 48 games with Boston before being traded to Phoenix midway through his rookie season.

Boston is off until Saturday’s away game against defending champion Milwaukee in a Christmas Day matinee. Cleveland visits Toronto in its next game on Sunday night. – Rappler.com