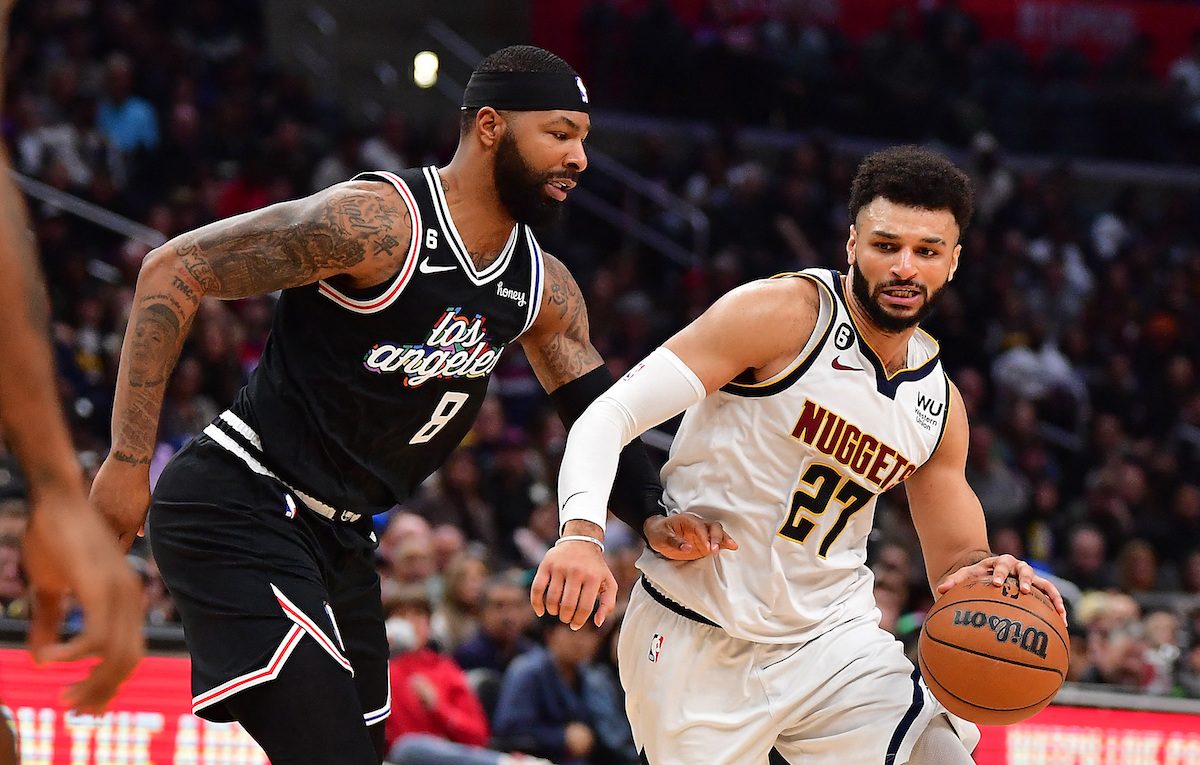 WINNING STREAK. Jamal Murray leads the way for the Nuggets in their fifth straight win.

Facebook Twitter Copy URL
Copied
Nikola Jokic sits out, but the Nuggets win for the 15th time in 18 games to seize the top spot in the Western Conference

Jamal Murray recorded 24 points and 8 rebounds as the Denver Nuggets thrived despite the absence of Nikola Jokic to notch a 115-103 victory over the host Los Angeles Clippers on Friday, January 13 (Saturday, January 14, Manila time).

Michael Porter Jr. scored 22 points and Aaron Gordon added 17 for the Nuggets, who won their fifth straight game and earned their 15th victory in the past 18. Jokic, the two-time reigning NBA Most Valuable Player, sat out due to a wrist injury on a night when the Nuggets took over sole possession of first place in the Western Conference.

The victory was Denver’s eighth in the past nine meetings with the Clippers.

Kawhi Leonard registered 24 points and 8 rebounds but could not prevent Los Angeles from losing for the seventh time in the past eight games. Norman Powell had 18 points, while Marcus Morris Sr. and John Wall each scored 16.

The Clippers were without Paul George (hamstring) for the fourth straight game and Luke Kennard (calf) for the third game in a row.

The Clippers hit on 47.1% of their shots, including 10 of 29 (34.5%) from behind the arc. Los Angeles committed 7 turnovers in the fourth quarter after having just five entering the stanza.

Los Angeles trailed by 2 with 7:55 left in the fourth quarter before Denver went on a 10-0 run that included a three-pointer from Murray, a three-point play from Bruce Brown, and a trey from Gordon. Brown split 2 free throws with 5:34 remaining to cap the surge as the Nuggets took a 104-92 lead.

Terance Mann drained a three-pointer to pull the Clippers within 110-103 with 1:41 left. However, Porter hit 2 free throws with 1:18 to go and Caldwell-Pope drilled a trey with 16.6 seconds remaining to seal it.

Leonard scored 14 first-half points and the Clippers led 58-57 at the break. Porter had 14 in the half for Denver.

The Nuggets rattled off 9 straight points to take a 70-66 lead on Gordon’s three-pointer with 6:47 left in the third quarter. Denver led by 7 late in the period before Wall made 2 free throws with 10 seconds remaining, slicing the Clippers’ deficit to 86-81 entering the final stanza. – Rappler.com