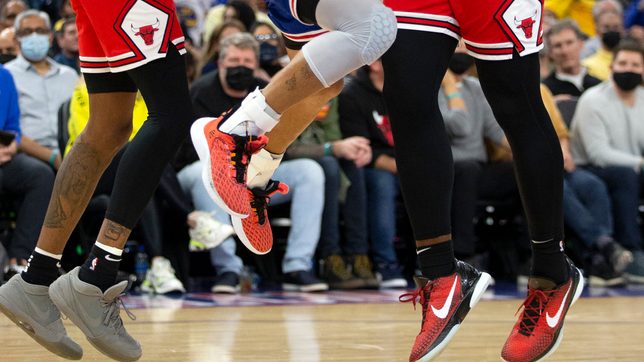 SIZZLING. Warriors star Stephen Curry splits two Bulls defenders on a drive to the basket during the fourth quarter.

Andrew Wiggins had 15 points, Kevon Looney grabbed a game-high 10 rebounds, and Draymond Green turned in another strong all-around game for the Warriors, who opened their 16-day homestand with a loss to the Memphis Grizzlies before rattling off seven straight wins.

Zach LaVine had 23 points and DeMar DeRozan 18 for the Bulls, who began a five-game trip without Nikola Vucevic after the big man tested positive for COVID-19 earlier in the week.

Attempting to extend a two-game winning streak, the Bulls came out firing, going up 24-14 on the second of consecutive three-pointers by Ayo Dosunmu.

However, the Warriors tightened the defensive screws at that point, limiting Chicago to five points over the remaining 3:18 of the period, then to a total of just 33 points in the middle two quarters while taking command.

Curry, who had a 50-point game Monday against the Atlanta Hawks, connected on nine of his 17 3-point attempts and 15 of 24 shots in all. He also had five assists and four rebounds in 34 minutes.

The 40-point game was the 52nd of his career. Curry has made nine or more three-pointers 36 times, an NBA record. James Harden and Damian Lillard are tied for the second-most such games in NBA history with nine.

Jordan Poole chipped in with 14 points, while Green, who had been questionable for the game with a bruised right thigh, contributed 9 points, 9 rebounds, and a game-high 7 assists.

Chicago made just eight of its 27 three-point attempts.

LaVine had two three-pointers on four attempts, but teammates Lonzo Ball and DeRozan combined to go just 2-for-10 from beyond the arc.