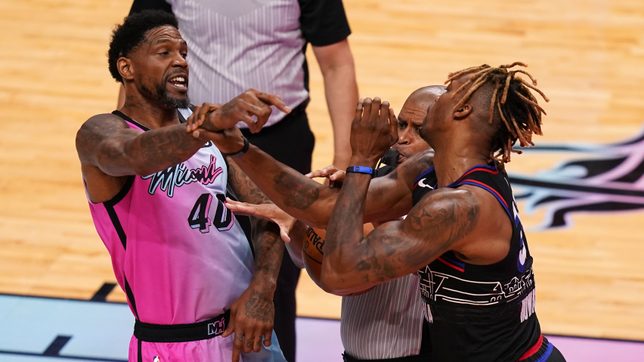 SQUABBLE. Heat forward Udonis Haslem (left) and Sixers center Dwight Howard get into an altercation during the first half.

Facebook Twitter Copy URL
Copied
Miami boosts its chance of crashing the East top four as the Heat stall the Sixers’ bid to lock the No. 1 spot

Jimmy Butler scored 21 points and the Miami Heat took a big early lead and never looked back in a 106-94 win over the visiting Philadelphia 76ers on Thursday night, May 13 (Friday, May 14, Manila time).

The result kept Philadelphia (47-23) from clinching the top playoff seed in the Eastern Conference. The Sixers, who took their second loss in a row, would clinch first place with a win over the visiting Orlando Magic on Friday night.

The Heat (39-31) earned their fourth consecutive win and prevailed for the seventh time in eight games. Miami, which is tied for fifth in the East with the New York Knicks (39-31), has two games left as it tries to climb past the fourth-place Atlanta Hawks.

Miami ends the regular season with games at Milwaukee on Saturday and at Detroit on Sunday.

The Heat, who shot 50.6% from the floor, got 18 points apiece from Bam Adebayo and Tyler Herro.

Tobias Harris led the 76ers with 21 points. Shake Milton put up 12 points and Danny Green had 11.

Sixers center Joel Embiid, back in the lineup after he missed the Tuesday game at Indiana with a non-COVID illness, was limited to 6 points and 2 rebounds in 25 minutes. He shot 3-of-9 from the floor.

Miami, which is 11-3 since beating the Brooklyn Nets on April 18, ran out to a 16-point lead to end the first quarter. The Heat were on top by 22 after Herro hit a 15-foot jumper and a three-pointer in the middle of the second quarter.

In their final home game of the regular season, the Heat brought in Udonis Haslem late in the first quarter.

Haslem, an 18-year veteran who is not only a Miami native but has played his whole career with the Heat, scored 4 points in three minutes. However, he was ejected after getting into an altercation with Dwight Howard.

Miami also announced Victor Oladipo underwent surgery on his right quadriceps tendon. Oladipo played in four games after being acquired in a March trade with Houston. He has been out of the lineup since April 8. – Rappler.com