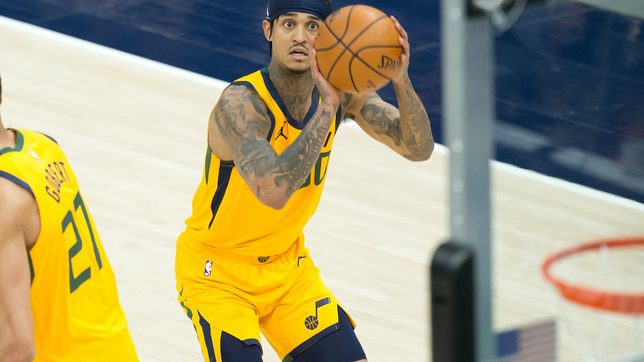 HOT STREAK. Jordan Clarkson and the Jazz protect their home court for the 22nd game in a row.

Donovan Mitchell scored 22 points and led the three-point barrage for the Utah Jazz with 6 in a 137-91 victory over the shorthanded Orlando Magic in Salt Lake City on Saturday, April 3 (Sunday, April 4, Manila time).

Joe Ingles and Bojan Bogdanovic each scored 17 points, while Jordan Clarkson threw in 15 off the bench as the Jazz won their ninth straight overall and 22nd in a row at home.

Utah set an NBA record with 18 three-pointers in the first half, passing the 2018 Golden State Warriors (17). The Jazz finished hitting 26 of 55 from beyond the arc, including multiple makes by Mitchell (6-of-7), Ingles (5-of-7), Bogdanovic (4-of-6), Clarkson (3-of-6), two each by Georges Niang and Ersan Ilyasova, and one apiece from Royce O’Neale, Jarrell Brantley, Miye Oni, and Matt Thomas.

Rudy Gobert tallied 11 points, 6 rebounds, and 4 blocks. He did that in just 20 minutes in a game in which no starter logged more than 25 minutes.

In addition to the three-point spree, the Jazz compiled 34 assists, 10 steals, and a 50-39 rebound edge while shooting 55.4% from the field.

The Magic scored the first points on a Chasson Randle layup, but that lead disappeared 14 seconds later and there was no drama left in who’d come out on top by the end of the first quarter, with Utah up 38-20. The Jazz followed that with a 40-20 second-quarter blast for a 78-40 halftime lead.

Orlando chipped away at the lead a little bit, never making a serious run, but the Jazz reserves finished strong with a 30-19 fourth-quarter output. That resulted in Utah taking its largest win of the season margin-wise (46 points) on the road for games in Dallas and Phoenix next week. – Rappler.com