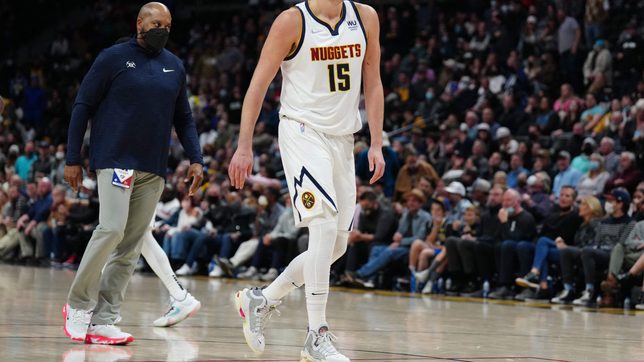 DOUBLE-DOUBLE. Nikola Jokic comes close to a triple-double before getting ejected.

Aaron Gordon had 16 points and Jeff Green scored 13 for the Nuggets, who held a 33-point lead in the third quarter but had to hold on. Jokic was tossed midway through the fourth period after arguing calls with two different referees after the same passage of play.

The Wizards were without Kyle Kuzma due to health and safety protocols.

Denver was missing JaMychal Green, who suffered an ankle injury in San Antonio on Saturday night, and Will Barton, who has missed the past two games with a non-COVID illness.

The Nuggets led by seven after the first quarter and quickly expanded the gap in the second.

Markus Howard hit a three-pointer and Vlatko Cancar scored five points in an 8-2 run to open the period, making it 37-24. Daniel Gafford’s dunk got the Wizards within 46-37 midway through the quarter, but then the Nuggets began to pull away.

Morris hit a 3-pointer and Jokic scored the Nuggets’ last six points of the half to put Denver ahead 59-41 at intermission.

In the third quarter, Jokic hit a 3-pointer and a layup, Morris completed a four-point play and Jeff Green scored six straight points to make it 74-44 with 9:03 left in the third.

Less than a minute later, Jokic was ejected, and the Wizards eventually cut the margin to 105-95 with 3:25 left. Holliday’s 10-footer made it an eight-point game and Washington had a chance to get closer, but Beal was called for charging with 1:37 left.

Gordon dunk’s made it 107-97 with 1:17 to go. Caldwell-Pope hit a 3-pointer before Denver closed out the win at the foul line. – Rappler.com