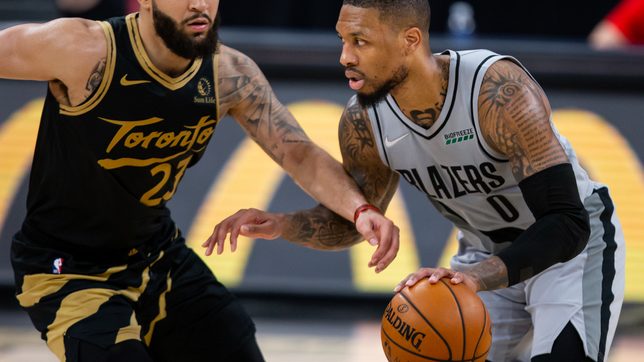 TOP GUNNER. Damian Lillard chalks up a double-double for the Trail Blazers in their win against the Raptors.

CJ McCollum scored 10 of his 23 points in the 4th quarter and had 7 rebounds for the Trail Blazers, who have won 3 straight road games.

The Raptors were without Kyle Lowry (sore right foot) and DeAndre’ Bembry and Paul Watson Jr (health and safety protocols).

The teams completed a trade on Thursday that sent Powell to Portland with Gary Trent Jr and Hood going to Toronto.

The Trail Blazers, who trailed by as many as 11 points during the 2nd quarter, outscored the Raptors 23-10 in the 3rd quarter to lead by 7 entering the 4th.

A VanVleet three-pointer cut the lead to one with 2:28 remaining. McCollum responded with a jumper and a layup for a five-point lead.

McCollum later hit a jumper and a free throw to increase the lead to 7 with 44.4 seconds left.

VanVleet made a layup to cut the lead to 3 with 22.6 seconds left. Powell made two free throws for a five-point lead. A Siakam layup trimmed it to 3 with 6 seconds to go.