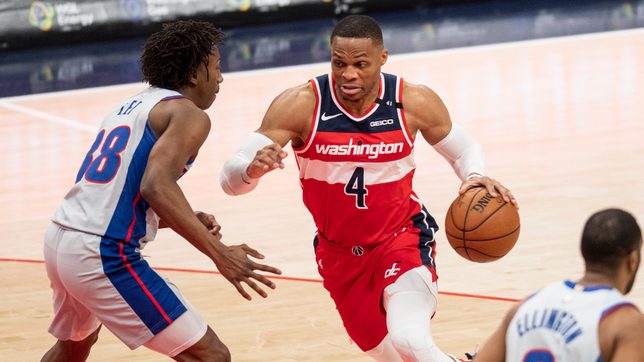 Beal had 17 points and 6 assists in 21 minutes for the Wizards, who nearly gave away a 30-point, second-half lead. Rui Hachimura supplied 14 points and Daniel Gafford, acquired from Chicago on Thursday, contributed 13 points, 5 rebounds, and 3 blocks in his Wizards debut.

The game got away from the Pistons in the last 4 minutes of the opening quarter. Washington went on a 13-3 run to take a 33-22 lead.

Gafford scored 4 inside baskets during that span, 3 of which were set up by Westbrook.

Westbrook scored 6 points in the first 4 minutes of the 2nd quarter to increase the Wizards’ lead to 16.

In the last 3:14 of the quarter, Washington outscored Detroit 16-4 to grab a 68-41 halftime lead. Beal scored 8 of those points, including a pair of three-pointers.

Deni Avdija and Westbrook drained three-pointers in the last 30 seconds to cap off the Wizards’ big half. Beal and Westbrook combined for 32 points by the break.

An Alex Len dunk 3 minutes into the second half increased the Wizards’ lead to 30, 74-44. Detroit suddenly awoke, going on a 25-2 run to cut Washington’s advantage to 7 points.

Ellington was the sparkplug, as he drained 3 three-pointers and set up a Saddiq Bey dunk.

Stewart converted two putbacks to get the Pistons within 3 points but that’s as close as they would get. The Wizards scored the next 9 points, including a Westbrook layup and assist, to make it 91-79 midway through the quarter. The Wizards led by double digits the rest of the way. – Rappler.com