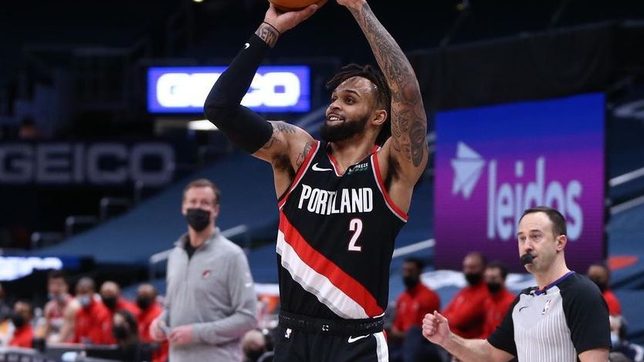 NEW TEAM. Gary Trent Jr bids the Trail Blazers goodbye after two and a half seasons with the team.

Gary Trent Jr followed the same career path of his father Gary Trent Sr as the Portland Trail Blazers shipped him to the Toronto Raptors just before the NBA trade deadline.

The same thing happened to Trent Sr two decades ago, with Portland trading him to Toronto in 1998, a year before Trent Jr was born.

What made the trade more interesting is the timing of the transaction.

Both Trent Jr and Trent Sr were dealt from the Blazers to the Raptors 41 games into their respective third seasons in the NBA.

Aside from the trade, the father and son have similarities with the way they entered the league.

Trent Sr was selected by the Milwaukee Bucks in 1995 before he was immediately shipped to the Blazers.

Meanwhile, Trent Jr got picked by the Sacramento Kings in 2018 but was traded to the Blazers on draft day.

Trent Jr has emerged into one of the Blazers’ top offensive options over the last two years, averaging 15.0 points on a 39% clip from three-point distance to go with 2.2 rebounds and 1.4 assists.

“Rip City! Appreciate all the love and support you gave me over the last 3 years, I will never forget how loud the MODA Center was,” Trent Jr wrote on his Instagram account.

“Thank you for giving me the opportunity of a lifetime.” – Rappler.com