BOUNCE BACK. Giannis Antetokounmpo and the Bucks erase a 0-2 deficit in the NBA Finals.

Facebook Twitter Copy URL
Copied
The Bucks become the first team in this NBA Finals to win a game on the road, moving on the cusp of capturing their first championship in five decades

“A series doesn’t really begin until someone wins on the road.”

Four games of home dominance had us all thinking of which team would strike first away from the comforts of their own court. The Milwaukee Bucks had the opportunity of a lifetime in Game 5. Win, and you go back to Milwaukee, in a court where they have lost only once during these playoffs. Lose, and you give the Phoenix Suns two opportunities to close it out.

After the first quarter, it seemed like the Bucks were content with not taking such a golden opportunity and running away with it. Instead, they were blitzed by the Suns’ 37 first-quarter points. The Bucks’ half-court offense – a looming elephant in the room despite their recent success – came back to haunt them. Their transition offense and offensive rebounding early on – ballasts against their mediocre half-court offense – were absent, made scarce by the Suns’ incredible shot-making, which took away stops and prevented the Bucks from snatching rebounds and running on the break.

The Suns outscored the Bucks, 37-21, on 73.7% shooting from the field. They only missed five shots during the entire quarter. The scarcity of misses forced the Bucks to set up in the half court, with the Suns content on letting the Bucks run whatever they want, banking on their actions going nowhere and forcing them to play the shot-making game.

It initially worked. It was the latest counter in a series where each team’s head coach has had to concoct responses. The Bucks forced Suns head coach Monty Williams to think of a counter to the Bucks’ fast-paced play, dominance of the offensive boards, and a way to neuter possessions involving Giannis Antetokounmpo as the screener in screen-and-roll actions.

It was first-quarter haymaker that the Bucks ran headfirst into. Instead of staying down for the count, the Bucks got back up and threw counters of their own – several counters, really – that caught the Suns flush in the face.

Here were some of the key counters the Bucks threw at the Suns on their way to a 123-119 Game 5 win:

Jrue Holiday was having an abysmal offensive series. Averaging 15.3 points on a 33/27/90 shooting split just wasn’t going to cut it, not when you’re the guy being counted on to be a much better offensive player than the guy you replaced.

Here’s a nifty stat for you: during the regular season, Holiday shot 64.9% on shots less than five feet away from the rim, a career-high.

Most of those missed shots looked highly makeable for someone of Holiday’s finishing stature. Sure, the Suns have had some paint collapses and good contests underneath the rim, but Holiday largely has had some layups that he simply botched. It was looking highly mental – and few of them were due to wonky mechanics or terrible decision making.

But in Game 5, Holiday suddenly found his groove on offense. Not only were his jumpers going in; his aggressive rim pressure paid dividends, with his finishing touch returning to him in a game the Bucks needed his ability to score and create off the bounce.

These finishes are night and day from the Holiday who struggled to even hit the rim on some of his point-blank shots: 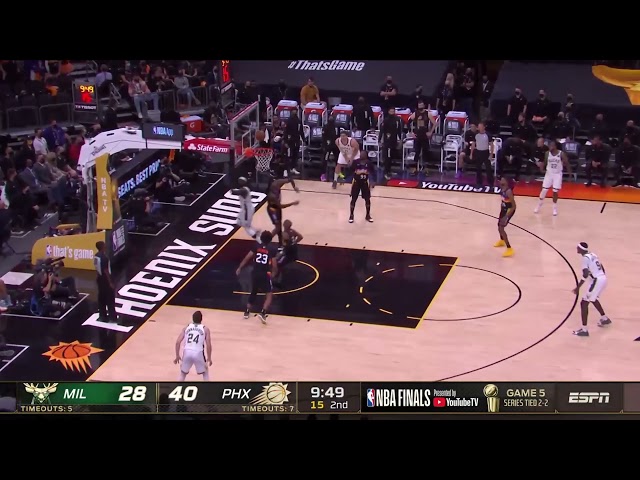 The return of Holiday’s inside game also fed into the return of his mid-range and outside shooting excellence. Holiday was a serviceable jump shooter during the regular season, shooting 46% on mid-range shots and 39.2% on threes. Holiday is nowhere close to being an elite shooter – but he’s a much better one compared to Eric Bledsoe, a big reason as to why the Bucks acquired him and considered him an upgrade.

The shooting upgrade never really materialized during the first four games, which allowed the Suns to duck under screens for Holiday, as well as comfortably drop back against him, daring him to pull up and jack distance shots – a risk the Suns were comfortable with taking.

Holiday, to his credit, turned the Suns’ gamble into a losing bet: 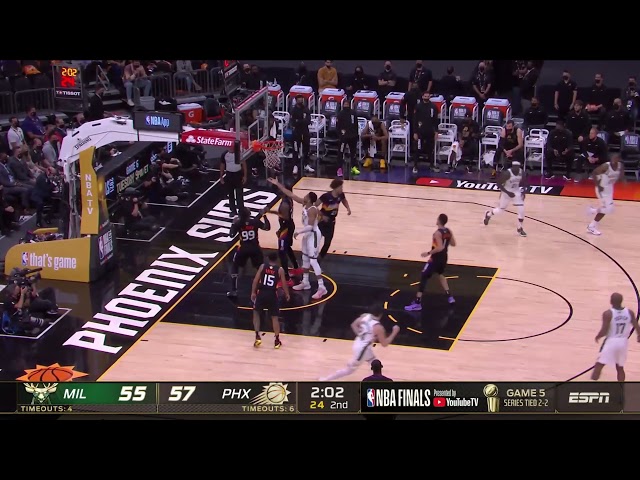 Punishing the Suns for disrespecting his ability to hit jumpers was sublime, but the incredible shot-making, even when the coverage was sound and contests were on-point, was surreal.

Holiday picked his spots and wasn’t in tunnel vision mode – he distributed the ball and created shots for others, with his 13 assists as attestation of that fact.

But in spite of his overall struggles on offense, Holiday’s ability to guard and hound the Suns’ ball-handlers never really wavered. That was one half of the puzzle that was always present, the side of Holiday that stood firm and was consistently present.

The Bucks’ adjustment of Holiday hounding the ball-handler persistently is something that should be topping lists of reasons behind the Bucks’ current success. Holiday possesses a unique combination that, arguably, no other guard in the league has: defensive IQ, elite screen navigation, physicality, and the ability to keep assignments in front.

Holiday has been a huge reason behind the Bucks’ persistence to stick to drop coverage on several possessions (although the Bucks have been more willing to mix up their coverages). Holiday’s ability to trail, stay attached, and recover to his assignment has made shots difficult for the likes of Chris Paul. 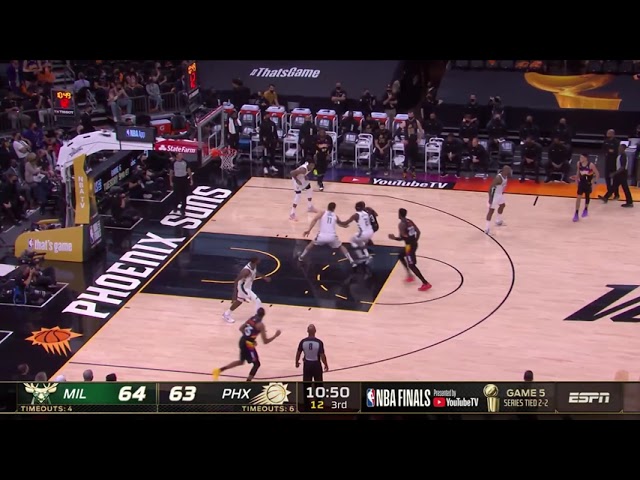 The stop above was really a two-man effort from Holiday and Brook Lopez, who stayed just in front of Paul – discouraging a pull-up – before Holiday could recover and successfully contest. But few guards can navigate screens and recover seamlessly and near-flawlessly like Holiday did above. It rendered help from the perimeter unnecessary, allowing the others to stay home on their assignments, leaving Paul with no other choice but to shoot against a contest.

Devin Booker – despite another flamethrower performance – also had his down moments when pressured on the ball; Holiday had a huge hand in that, figuratively and literally: 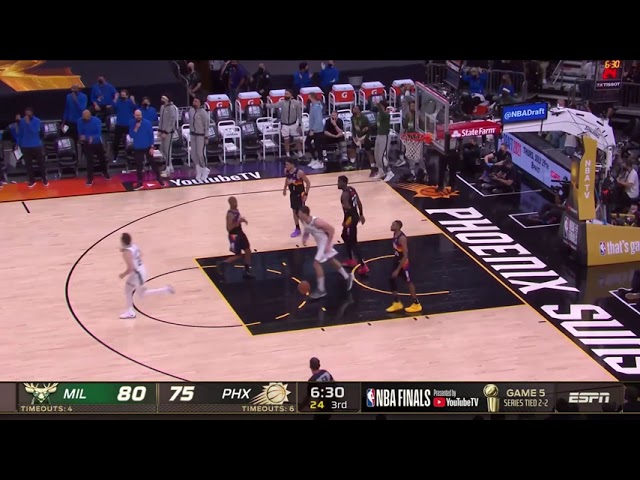 The on-ball steal against Booker in the first clip was excellent, but the good stuff was really displayed by Holiday’s timely help from the wing in the second clip. It was a team effort – PJ Tucker keeping Booker in front, Antetokounmpo coming over to double and cut off potential passing lanes – but Holiday coming over to snatch the ball away forcefully was the cherry on top.

Holiday’s defense remains a solid institution for the Bucks, but a 27-4-13 performance on 60% shooting from the field, 50% on threes, and 67.5% true shooting is a nice way of announcing your arrival on the offensive end of things. This is the Holiday the Bucks sacrificed assets for – an “overpay” that might just pay off, if it means hoisting the trophy at the end of the season.

The Bucks winning the possession battle

The Bucks thrive in a high-possession game, where they put up more shots, run the floor, and punish non-set defenses through cross-matching. They were near the top of possessions-per-game lists, finishing second in pace (102.85) during the regular season.

The Suns, on the other hand, thrive in the half court. They like to run offensive sets and give multiple looks off the pick-and-roll, which calls for a slower, more methodical approach. In terms of possessions per game, the Suns were on the opposite end of the spectrum, finishing 24th (98.00) in the league during the regular season.

This contrast of approaches was a recipe for an entertaining tug-and-pull contest – and so far, the Bucks have been yanking the Suns toward their own end of the rope.

The Suns have gotten several opportunities to operate in the half-court – which should be right up their alley – but the Bucks have made the Suns bleed for every point against a set defense. The Suns’ trademark offense, consisting of moving around the ball and finding the best shot possible, has been made difficult by the Bucks, who have forced the Suns out of character by speeding up their half-court possessions and not letting them dictate the tempo and cadence of possessions.

The Bucks have been highly successful in forcing the likes of Paul to take shots early in the shot clock, which runs anathema to his – and by extension, the Suns’ – methodical approach. 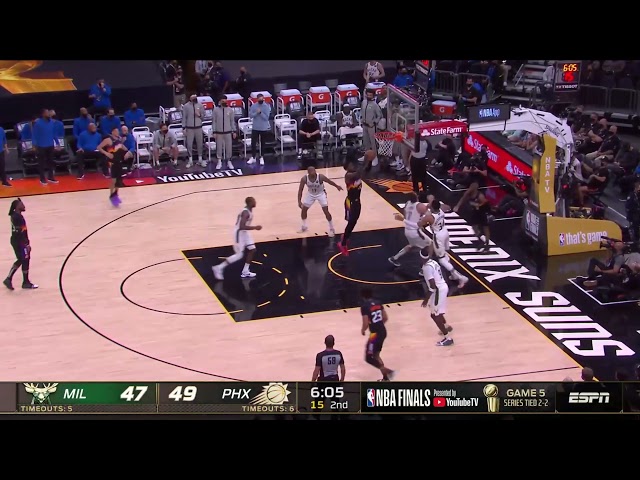 Paul was highly sped up on each possession in the clips above, mostly against potential mismatches against Pat Connaughton and Bobby Portis. But instead of dribbling out and prolonging the possession – which would’ve increased the chances of him getting to his spots more smoothly and would’ve also increased the possibility of drawing away help from somewhere – Paul rushed the possessions.

Save for one possession above, it led to quick transition points or buckets in secondary transition, which were more in the Bucks’ wheelhouse and which were made possible by their successful fast-forwarding of the Suns’ half-court tempo.

Meanwhile, while the Bucks’ half-court offense has been generally mediocre, they’ve been getting plenty of second-chance opportunities through offensive rebounds; they are currently rebounding 31.5% of their misses in this series, a mark that would have led the league during the regular season.

It’s simple math – more offensive rebounds equals more possessions. More possessions means more opportunities to score, and the Bucks, through a combination of sheer size and determination, have pounded the boards and nullified the Suns’ half-court stops on several occasions. 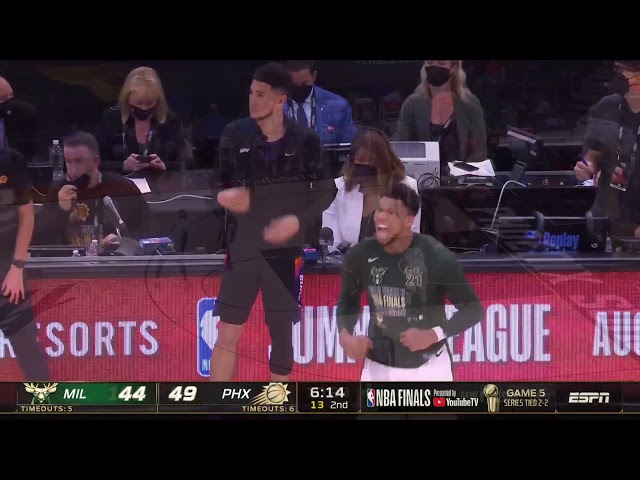 The Suns matched the Bucks’ shot attempts in Game 5, 87-87 – but zoom out and look at the bigger picture, and the Bucks have had a massive advantage in total shot attempts: 455-424.

Not only have the Bucks been winning the shot quality contest; raw shot quantity has also favored them so far, which spells massive trouble for the Suns.

The Bucks winning the corner three contest on both ends

After the Suns torched the Bucks in Game 2 with a 10-of-17 clip on corner threes, the Bucks have since repaired that leaking dam, an adjustment that has given up a total of only seven corner shots in the three games that followed.

The importance of staying attached to ball-handlers, navigating screens, and successfully containing the ball-handler while keeping tabs on the roll man in the pick-and-roll has been crucial. The Bucks have mostly been successful at managing and thriving in such situations, allowing defenders on the corners to stay home or to at least recover in timely fashion after tagging the roller.

There has also been the Bucks’ switching. The number one goal of a switch-everything scheme is to deny ball and personnel movement. Denying such movement reduces a half-court possession to a one-on-one contest; frequent isolations against versatile defenders with capable point-of-attack defense means there is little chance of the corners opening up.

Combine corner denials with corner excellence on the other end, and the Bucks – who shot 6-of-9 on the corners in Game 5 – turned the tables on the Suns: 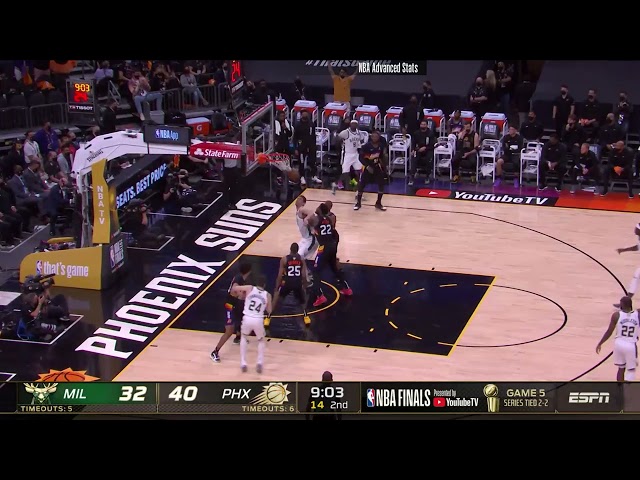 Besides the transition corner threes, you can see how the Bucks managed to flip the script on the Suns on some of the clips above. Whereas the Suns were the ones forcing plenty of help off the corners in previous contests, it’s now the Bucks who are forcing the Suns to help one pass away, mostly through forcing roll-man tags on screen-and-rolls, or through penetration and drawing help from the strong-side corner – a defensive no-no that was once a pervasive problem for the Bucks, but are now plaguing the Suns.

Such a reversal of fortunes has been symbolic of the Bucks storming back to win three consecutive games, taking a 3-2 lead and sending the series back to Milwaukee, with a chance to win all the marbles on their home court.

The Suns may have one last card to play that will, in turn, reverse the odds toward their favor, but the inspired play and resiliency of the Bucks could very well make such a situation highly unlikely. – Rappler.com