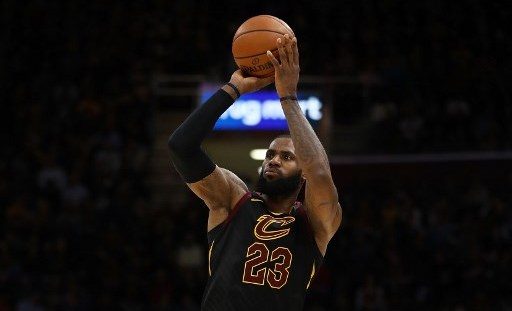 CLEVELAND, OH - DECEMBER 06: LeBron James #23 of the Cleveland Cavaliers takes a second half shot while playing the Sacramento Kings at Quicken Loans Arena on December 6, 2017 in Cleveland, Ohio. Cleveland won the game 101-95. NOTE TO USER: User expressly acknowledges and agrees that, by downloading and or using this photograph, User is consenting to the terms and conditions of the Getty Images License Agreement. Gregory Shamus/Getty Images/AFP

Facebook Twitter Copy URL
Copied
LeBron James signed the card, which features a patch from one of his jerseys

NBA superstar LeBron James is a record-setter in the memorabilia world as well as on the court.

A rare James trading card from his rookie season in the NBA with the Cleveland Cavaliers – 1 of only 23 manufactured -– sold for $1.8 million on Saturday, July 18, Goldin Auctions said.

James signed the card, which features a patch from one of his jerseys, and it was graded at 9.5 – “Gem Mint condition” according to the auction house.

“The incomparable superstar has penned a vivid blue ink signature on the obverse of this ultra-premium collectible,” Goldin Auctions said in the description of the item. “Its cardfront presentation also incorporates an exceptional, tri-color James-worn jersey patch relic.”

The Cavaliers selected the highly touted James with the first pick in the 2003 NBA Draft.

The Akron, Ohio, native scored 25 points on 12-of-20 shooting with 9 rebounds, 6 assists, and 4 steals in his debut against the Sacramento Kings.

Now a 16-time All-Star, three-time NBA champion and four-time NBA Most Valuable Player, James was averaging 25.7 points per game, 10.6 assists and 7.9 rebounds when the NBA season was halted amid the coronavirus pandemic.

He has led the Lakers to first place in the Western Conference with the league preparing to resume action on July 31.