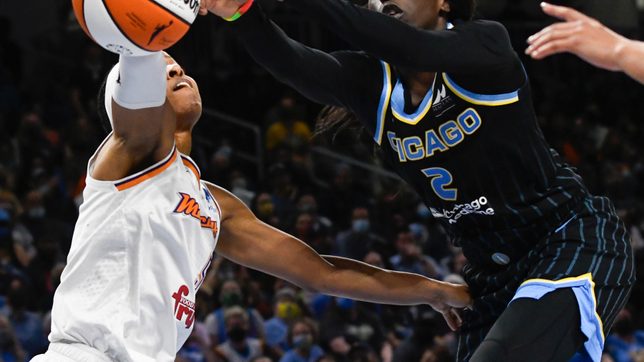 ALL OUT. Chicago Sky's Kahleah Copper fights for a rebound against Phoenix Mercury guard Shey Peddy.

Kahleah Copper scored 22 points and the Chicago Sky clamped down on the visiting Phoenix Mercury to take a 2-1 lead in the WNBA Finals with an 86-50 victory Friday night, October 15 (Saturday, October 16, Manila time).

The Sky bounced back from a 91-86 overtime loss to move within one victory of their first WNBA title. Game 4 of the best-of-five series will be Sunday afternoon in Chicago.

Chicago opened a nine-point lead at the end of the first quarter and expanded it to 22 points heading into halftime.

The Mercury scored the first 4 points of the third quarter, but the Sky scored the next four and Azura Stevens’ basket soon extended the lead to 56-32.

Chicago led by 26 points on two occasions before holding a 62-38 edge at the end of the third quarter.

Parker and Vandersloot had two baskets each as Chicago opened an early 11-4 lead.

Phoenix got within 4, but Copper had 5 points late in the quarter as the Sky took a 20-11 lead into the second.

Allie Quigley and Copper scored 6 points each as Chicago extended its lead to 35-16.

Taurasi responded with a three-pointer, but the Sky built the lead to 21 points.

Diggins-Smith made a triple for the Mercury before Chicago scored the final 4 points to take a 46-24 halftime lead. Copper had 20 points at the break.

The 22-point halftime margin tied a WNBA Finals record set by the Mercury against the Sky in Game 1 of the 2014 finals. – Rappler.com