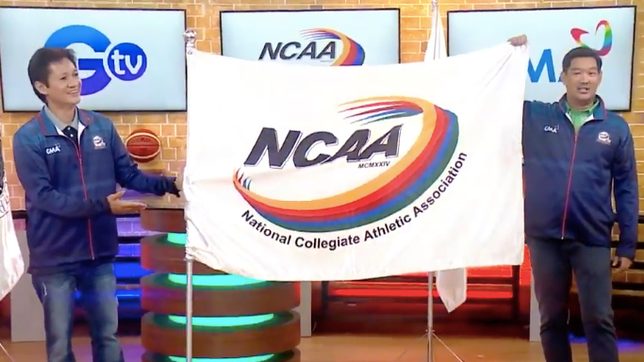 HANDOVER. Letran turns over the NCAA hosting duties for Season 97 to St. Benilde.

Against all odds brought by the pandemic, the NCAA successfully got through and wrapped up a unique Season 96 offering that coincided with host school Colegio de San Juan de Letran’s quadricentennial school year.

“Even against the toughest odds, hope remains connected to our sporting spirit. We will hold on and we will rise up stronger,” said Management Committee chairman Fr. Vic Calvo of Letran in the simple closing ceremony on Sunday, August 8.

Despite the limited number of events held under the strictest level of sporting protocols set by the Inter-Agency Task Force (IATF), Calvo still thanked everyone who tuned in, and made the season’s hosting possible.

“Thank you to all the coaches and players. Let us all continue this fight,” he said.

As ramped-up vaccinations possibly pave the way to a return of college sports by 2022, Letran has officially turned over Season 97 hosting duties to St. Benilde, represented by school president Br. Edmundo Fernandez, FSC.

“With united spirits, let us continue to train, and inspire our students to use their gifts and abilities, and strive to build a better nation,” he said.