WIN STREAK. Jenelyn Olsim (right) looks to follow up on her big win over Maira Mazar.

Facebook Twitter Copy URL
Copied
‘I want to finish this match on the ground, whether it be getting a submission or a TKO via ground and pound, because that feels good,’ says Team Lakay’s Jenelyn Olsim

Team Lakay’s Jenelyn Olsim is living by her squad’s mantra of learning from each match, regardless of the results.

It’s safe to say that she will already be bringing in a new dimension of her game after just one match in ONE Championship.

Olsim returns to action when she takes on Bi “Killer Bee” Nguyen in a crucial atomweight bout at the previously recorded ONE: Battleground III, which airs this Friday, August 27, from the Singapore Indoor Stadium.

Fresh off a submission win against Maira Mazar in her debut, Olsim is coming into this match against Nguyen with newfound confidence in her ground game after submitting Mazar in the third round of her previous bout.

“I got so much confidence from that match when it comes to grappling. Before that match, you wouldn’t normally see me going for takedowns, but the moment we hit the ground, I realized I’m comfortable there,” Olsim said.

“[I found out] that I can hang with some of the best grapplers. It also made my mentality tougher, particularly when the going gets tough.” 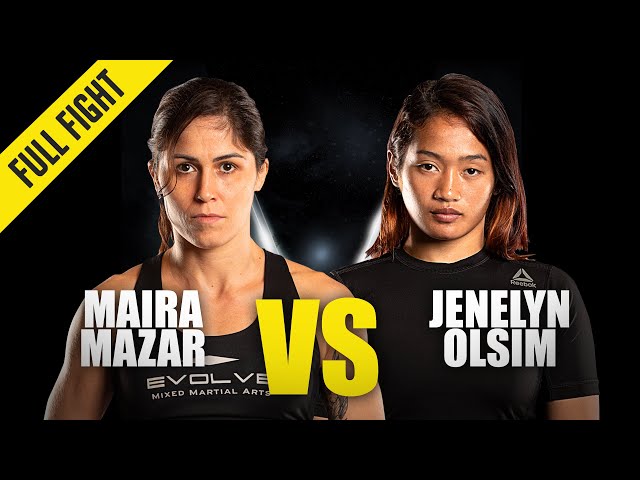 There’s no secret that the 24-year-old’s rapid development of her ground game stemmed out of pure unadulterated hard work.

Known as a very good striker owing to her Muay Thai foundation, Olsim moved to Team Lakay and decided to focus on mixed martial arts for good.

While the team is known for their elite work on the feet, the squad, led by coach Mark Sangiao, urged Olsim to be a complete fighter, and that’s why she started working on her foundations on the mat.

“When I moved to Team Lakay, I just really polished my grappling. Since I came from a Muay Thai background, they asked me to focus on grappling and wrestling more. The feedback has been good, and they’ve been saying that I’m a fast learner,” she said.

“Actually, that submission win I got from Mazar, it was the same exact drill that we’ve been doing during training, so that’s why I got it.”

Seeing that she can pull off a submission against an established grappler like Mazar, Olsim wants to make it two ground finishes in a row in the hopes of joining the historic ONE: Empower card.

The winner gets to face Grace “Thai Kitten” Cleveland in the alternate bout for the ONE Women’s Atomweight World Grand Prix, and Olsim wants a spectacular performance heading into it.

“I want to finish this match on the ground, whether it be getting a submission or a TKO via ground and pound, because that feels good.” – Rappler.com

Catch the previously recorded ONE: Battleground III this Friday, August 27, at 8:30 pm on One Sports and One Sports+. It will air simultaneously on the ONE Super App.