End of an era: Bhullar knocks out Vera for ONE heavyweight gold 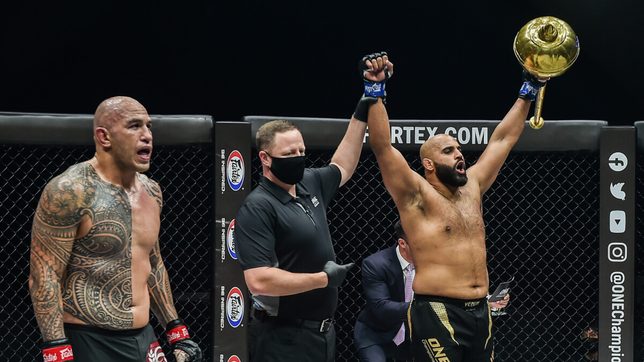 The dominant reign of Brandon “The Truth” Vera (16-9) has come to an end as Indian-Canadian juggernaut “Singh” Arjan Bhullar (11-1) dethroned and knocked out the Fil-Am heavyweight champion in the main event of ONE Championship: Dangal on Saturday, May 15 at Singapore Indoor Stadium.

Bhullar completely dominated in the second round of the fight and finished the five-year championship stint of Vera with his vicious ground and pound.

The 43-year-old Fil-Am star looked more like a challenger than a champion in the first five minutes of the bout as Vera kept his feet planted on the ground and settled for jabs, while Bhullar looked more active in striking and even scored a takedown.

Coming into the second round, Vera looked gassed and got stunned with an overhand right from Bhullar, which proved to be the beginning of the end for Vera. The Indian challenger landed a solid body shot and took Vera down to the ground where he finished the fight.

“It’s the first time in my entire career that I felt gassed in the first round,” Vera said in the postmatch interview. “I’m in shape, we’ve been training, we’ve been working with the best people in the world. This is new for me.”

“I’m really annoyed and disappointed about myself. We’ll just keep training, we go back to [Sanford MMA] and keep grinding to get my belt back,” he added.

This is now the second straight loss for Vera, who failed to snatch the ONE light heavyweight title against Aung La N Sang back in 2019. Bhullar, on the other hand, picked up his fourth straight win.

The 22-year-old Thai barely missed a single strike and opened up the fight with a strong head kick. Tawanchai then threw a one-two punch combination that dropped Clancy halfway through the first round.

Clancy survived Tawanchai’s onslaught in the first two rounds, but a picture-perfect head kick from Tawanchai in the third round sent the Irish cold to the ground and forced the referee to stop the fight.