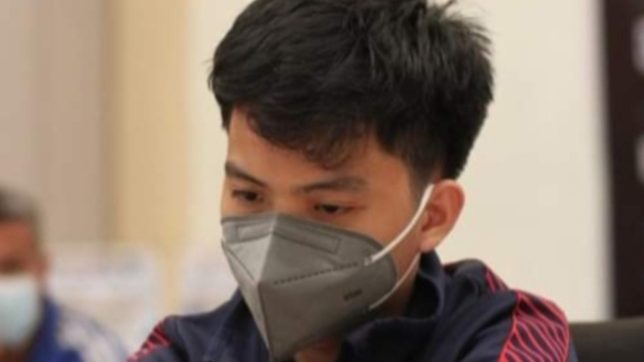 Groomed as the country’s next Wesley So, teen sensation Daniel Quizon proved that he is in a different level.

At 17 the youngest competitor in the tourney, Quizon tallied 8.5 points on six wins and five draws to rule the 2021 Philippine National Chess Championship Tuesday night, December 14, at the Solea Hotel and Resort in Mactan, Cebu.

The pride of Dasmariñas City in Cavite, Quizon wrapped up his unbeaten campaign with a draw with fellow International Master Ronald Dableo in the final 11th round. Also posting victories in the concluding day were second-running IM Ricardo de Guzman (7 points), IM Joel Pimentel, and the previously winless Allan Pason.

The fired-up Quizon wiped out all the three GMs – Laylo, Janelle Mae Frayna, and Rogelio Antonio Jr. – in this 12-player, round-robin affair. He pocketed the P80,000 top purse, plus a guaranteed slot to the national squad bound for the 2023 Asian Indoor and Martial Arts Games in Thailand.

Quizon sealed the crowning glory right in the penultimate 10th round after he drew with IM Jan Emmanuel Garcia. The slow-starting IM John Marvin Miciano surprised Quizon’s closest pursuer IM Ronald Dableo in 38 moves of the London System in that round.

Antonio, the oldest here at 59 and the winningest competitor with 13 titles to show in the National Open, had cited earlier the Philippine Team stalwarts Bersamina, 23, and Garcia, 26, as the players to beat in this year’s edition.

Until the much younger Quizon surprised them all.

“We always look up to Quizon’s performance on the other side of the playing hall because he’s young and talented and full of promise. We’re very excited about the future of this little boy,” said candidate Fide Master Jaime Joshua Frias II, who is competing in the 2021 Philippine National Mactan Chess Championship held at same venue.

Probably Quizon’s most difficult game in the six-day contest organized by the National Chess Federation of the Philippines with the theme “Barkadahan Para sa Bansa” came in the seventh round against the unheralded Pason.

In that match, Quizon struggled all the way. He had to dig deeper into his endgame resolve to neutralize Pason’s dangerous passed pawn and forced a draw after a marathon 62 moves of a double Fianchetto Modern defense.

Pason could not be denied, however, in the last round as he scored his only victory here over IM Michael Concio Jr. after 32 moves against the g3-opening.

De Guzman and Pimentel also triumphed with black opposite Antonio and Miciano, respectively.

“We just hope that Quizon’s resounding success won’t escape the probing eyes of the country’s chess authorities. The boy is a jewel that needs to be nurtured like GM So who’s now representing the US,” said National Master Levi Mercado, who followed the Mactan skirmishes game notations through Chessbomb.com.

The Filipino-born So is now an American citizen and is a mainstay of the US chess team. Like Quizon, So was also a child prodigy from the province of Cavite. – Rappler.com