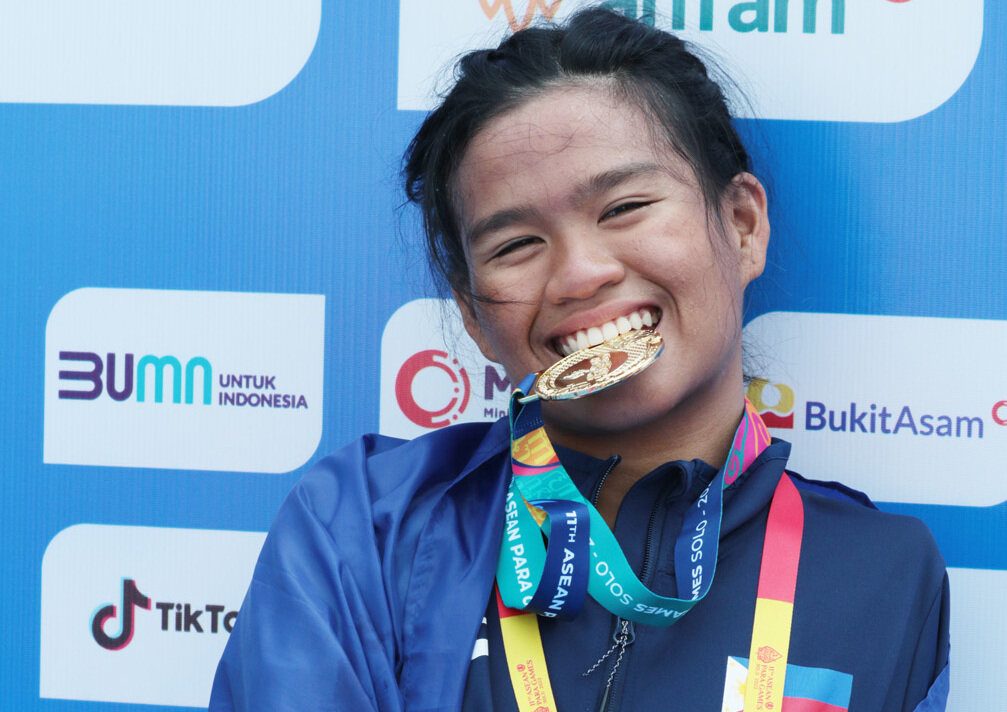 SURAKARTA, Indonesia – The Philippines now stands on track of recording one of its best finishes in the ASEAN Para Games.

Swimmer Angel Otom and chess player Sander Severino stood out as their two sports combined for six gold medals to help the Philippines prop up its haul to 21 golds, 19 silver, and 37 bronzes.

The medal tally surpassed the country’s 20-20-29 gold-silver-bronze finish in the 2017 edition in Kuala Lumpur, Malaysia.

“My hope is that we also surpass our finish of fifth overall in the medal standings with some more events remaining,” said Philippine Paralympic Committee president Mike Barredo.

Her gold came in record-breaking fashion as Otom finished nearly eight seconds faster than the 17-year-old mark of 56.80 set by Singapore’s R.T. Goh in the 2005 edition in Manila.

The limbless Pinay mermaid  finished far ahead of Vietnamese tankers Thi Sari Nguyen and Thi My Thanh Dan, who were second and third in times of 1:14.150 and 1:32.460, respectively.

Otom sustained her dominant form in her final event as the 19-year-old pride of Olongapo City led from start to finish in the women’s 50m freestyle S5 event to rule in 41.40 seconds.

“I am so happy but it has not sunk in yet that I am the country’s first triple gold medalist,” said Otom, who had a golden debut in the women’s 50m backstroke (41.68 seconds) last Monday.

The rookie swimmer’s parents, Marlou and Mila Otom, flew in from Manila and said they’re proud to see their daughter in action for the first time.

Two other swimmers had golden performances for the Philippines.

Ernie Gawilan scooped up his second gold medal by reigning in the men’s 200m individual medley SM7 in record-breaking fashion at 2:49.530, sinking the 14-year-old mark of 4:00.02 by Salungyoo Rawin of Thailand in the 2008 Bangkok Games.

A pleasant surprise was rookie Marco Tinamisan, who won the swimming team’s fourth mint of the day in the men’s 50m freestyle S3 event in 54.660 seconds.

FIDE Master Severino, meanwhile, delivered a gold by topping the individual rapid event, while powering the men’s chess squad to a sweep of the P1 team event at the Lo-rin Hotel grand ballroom.

Over at the Manahan Stadium, wheelchair racer Jerrold Mangliwan secured his second gold in ruling the men’s 400m T5 race in 1:06.20 while teammate Rodrigo Potiotan Jr. finished third but did not get a medal since there were only three entries in the event (1:09.870).

The duo of Russel Cundangan and Mary Ann Taguinod likewise took the silver in the J1-J2 women’s team event of judo.