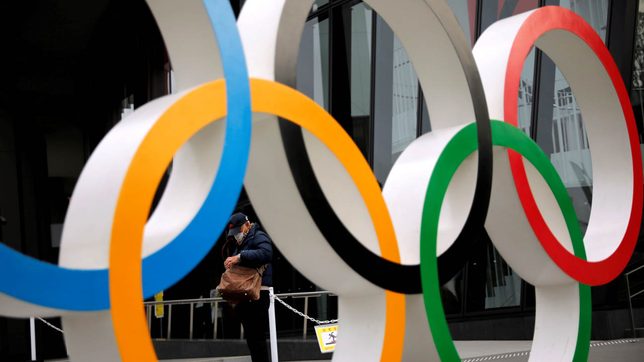 PANDEMIC GAMES. A man wearing a protective mask against COVID-19 is seen through the Olympic rings in Tokyo.

Facebook Twitter Copy URL
Copied
The four-month event has been hit by several high-profile runner cancellations, as celebrities have also pulled out

One of the first runners in the Tokyo Olympics torch relay has dropped out of the event scheduled for Thursday, March 25, the Games organizing committee said on Wednesday.

Homare Sawa, captain of Japan’s women’s football team, which won the 2011 FIFA Women’s World Cup, was one of those kicking off the torch relay on Thursday.

Her former coach Norio Sasaki told a press conference she had decided to pull out, citing health reasons

On Thursday, the sports complex  J-Village in Fukushima will house the starting ceremony for the Olympic torch relay, kicking off a countdown to the Games in Tokyo –the first ever organized during a deadly pandemic.

Members of the Japanese national women’s soccer team will use the Olympic flame, flown in from Greece, to light the torch. But the ceremony – originally planned for thousands of fans as a celebration of Japan’s recovery – will be closed to the public.

The first section of the relay will not have spectators, and as some 10,000 runners take the torch across Japan’s 47 prefectures, including far-flung islands, onlookers must wear masks and socially distance.

The four-month event has been hit by several high-profile runner cancellations, as celebrities have pulled out, citing late notice and worries about drawing crowds during the pandemic.

Hiromi Kawamura, who oversees the relay, said organizers have had “some crazy days” juggling fast-changing information, a shifting pandemic situation and negotiations with national and local governments.

“We’re asking people not to stand shoulder-to-shoulder. If it gets really crowded… if we feel the situation is dangerous, we’ll suspend the relay. Then we’ll start it again after we’ve made the area safe,” Kawamura said.

Japan has fared better than most countries, with fewer than 9,000 coronavirus deaths. But a third wave of infections has pushed the numbers to record highs, triggering a state of emergency in Tokyo and other areas that was lifted this week.

The majority of the public are against the Olympics being held as scheduled, polls show. – Rappler.com