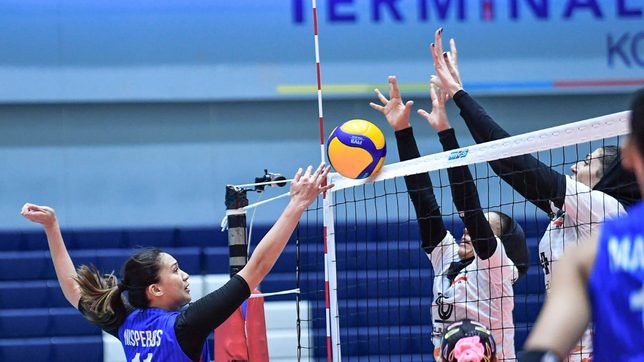 Rebisco closed out the preliminary round of the 2021 Asian Volleyball Championships with its third loss on Sunday, October 3, in Nakhon Ratchasima, Thailand

With Rebisco settling for the fourth and last seed of Pool B, the Philippine squad will face Pool A’s top seed Nakhon Ratchasima QminC in the quarterfinals on Monday, October 4 at 1:30 pm, Philippine time.

The Philippines’ second squad Choco Mucho will size up against Supreme Chonburi at 4:30 pm, Monday.

Though Saipa Tehran struggled with six errors in the opening set, the Iranian squad managed to overturn Rebisco’s set point at 24-23 with a 3-0 run to nab the early advantage.

But the Philippine club made sure not to fold in the next frame. Reinforced by team captain Aby Maraño and Eya Laure this time, Rebisco showed the chemistry among the veterans and the young players in the second set that helped propel the squad to a 1-1 equalizer.

Rebisco, though, reverted in the third set, with the collapse coming after the Philippine squad’s coaching staff called a mid-rally challenge for a net fault when the set score was tied at 8-all.

The Philippines lost the challenge and momentum shifted in favor of Saipa Tehran, which went on a massive 12-2 run that set it up for a dominant third-set conquest, 25-13.

In the fourth frame, the Filipinas trailed the Iranians by four, 10-14, when another rally was stopped midway that gave Saipa Tehran a free point.

Rebisco attempted to stop the bleeding with a 3-0 spurt that cut the deficit to five, 17-22, but the Iranians answered back with their own run to take the win. – Rappler.com