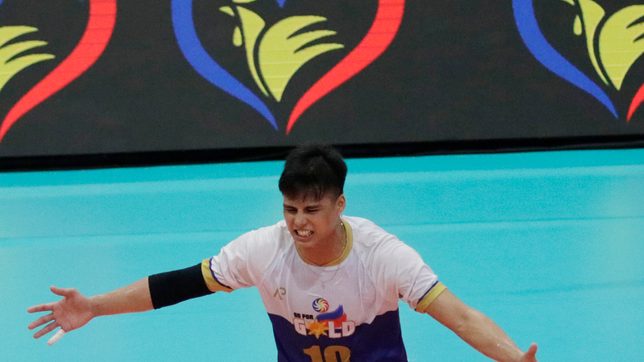 After Monday’s scrappy five-set win, Go for Gold rebounded with a straight-set victory,  25-15, 28-26, 25-20, over the Basilan Steel Spikers Amin-Anak to complete a two-match sweep in Pool A of the tournament.

Coach Dante Alinsunurin was so glad to have John Vic De Guzman with Go for Gold-Air Force, which retooled its roster for the competition after some of the Air Force players went into full-time military service work.

De Guzman was solid in only his second game with the Aguilas and finished with 17 points, including three service aces.

“We have the same system because he is also with the national team. It’s not hard for him to make adjustments, it’s very much the same,” said Alinsunurin of the many-time Philippine team captain.

Mark Alfafara, who like De Guzman is another key addition in the lineup, added 13 points, seven receptions and three digs while Francis Saura had nine points with two service aces.

“We had a better performance today,” Alinsunurin said. “We have a better effort in our service and receive so that’s everything went well.”

De Guzman knew that the Aguilas needed to be on the same page if they wanted to become the first-ever men’s Champions League winners.

“It’s all about teamwork. Whatever you can give to the team, you can do it. Don’t think of what you can do, I mean whether you are the highest scorer,” De Guzman said. “The important thing is your contribution to the team. Our team’s jelling team so we can win games. That’s our goal.”

Esmail Kasim and Mohammad Jainor Sulayman scored nine points apiece for the Steel Spikers, the last team to debut in the tournament.

The Steel Spikers and the Manileño Spikers dispute the remaining semifinals slot in Pool A at 1:30pm on Wednesday, November 30.  The loser will be relegated to the classification round for fifth to seventh places.

Sabong still in contention for semis

Jelord Talisayan led the Negros Oriental team with 18 kills, six digs and six receptions to improve to a 1-1 slate in Pool B.

“We didn’t expect to beat them [Global Remit],” Talisayan said. “They are a strong team and we prepared so well against them.”

“One of our main purposes is to inspire the young people of Negros Oriental,” said Talisayan, who is playing out of Guihulngan City. “We want to show them that we are role models in playing volleyball when they grow up.”

Charles Absin had three blocks out of his 15 points, while Ramil de La Cruz contributed 10 points and 12 receptions for Sabong.

Sabong will be able to advance to the semifinals if the spikers will be able to defeat Team Dasmariñas at 10am on Wednesday, December 1, and MRT-Negros will lose to Global Remit in the 4pm match.

Global Remit lost Ron Medalla to a left knee injury late in the second set where Sabong was leading, 22-16.

Sabong was ahead 22-14 in the fourth set when Alex Disquitado, Joeven Dela Vega and Peter Quiel led Global Remit’s 6-1 run to slice the lead to 20-23.

But Sabong capitalized on Global Remit’s two errors in the last three rallies to close out the one-hour and 49-minute match.