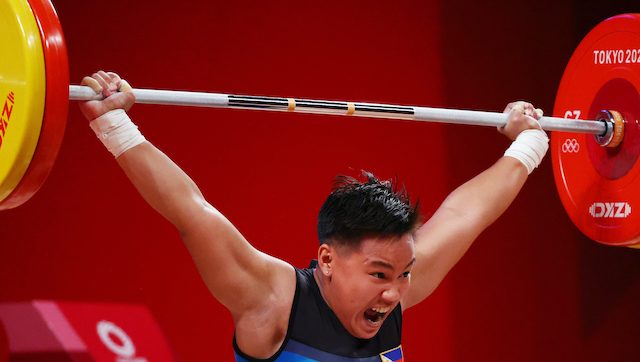 The 22-year-old Cebuana recorded a 100kg in the snatch and 122kg in the clean and jerk for a total of 222kg in her debut in the biggest stage of sports.

Canada’s Maude Charron took home the gold with a total lift of 236kg, while Italy’s Giorgia Bordignon bagged the silver (232kg), and Chinese-Taipei’s Chen Wen-Huei settled for the bronze (230kg).

Ando cleared 96kg in her first attempt in the snatch, but failed in her 99kg lift in the second.

She was able to bounce back stronger in the third attempt with her best 100kg snatch.

In the clean and jerk, she had a successful lift in the 118kg and only got to clear 122kg in the third attempt to close out her Tokyo Olympics campaign. Ando won two silver and one bronze in the Asian Weightlifting Championships, which propelled her to snag a maiden Olympic berth via continental allocation.

She also won the 2019 Southeast Asian Games silver in front of the home crowd. – Rappler.com