Nov 3, 2015 11:49 AM PHT
Victor Barreiro Jr.
Facebook Twitter Copy URL
Copied
Most of the defaced pages show a video and a message from Anonymous Philippines comparing the current government to a corrupted computer system 'prone to bugs and crashes' 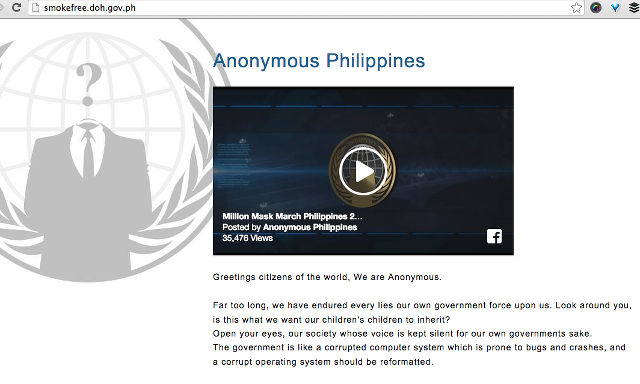 MANILA, Philippines – Hacking activism group Anonymous Philippines defaced or added messages to a number of government websites on Tuesday, November 3, in a bid to urge people to join its Million Mask March.

The defacement comes at around the same time of the group’s attack on actress Maine Mendoza’s Twitter account to promote its march.

Among the included URLs are the local websites for Iloilo, Butuan, and Zamboanga del Sur, as well as some minor pages for the Department of Health.

The group previously defaced the page of the National Telecommunications Commission, citing as reason the plight of the Filipino Internet user who deals with unreliable service or purportedly deceptive practices of Internet Service Providers (ISPs).

Most of the still-active defaced pages show a video and a message from Anonymous Philippines comparing the current government to a corrupt computer system “prone to bugs and crashes.”

A corrupt computer system, they added, “should be reformatted,” with a new operating system put in place whose sole purpose is to serve the people.

Anonymous Philippines touts a Facebook page with the invitation for the Philippines to join the Million Mask March – peaceful rallies to be held in 400-650 different locations worldwide, according to its mobilization webpage, millionmaskmarch.com