TOKYO, Japan (UPDATED) – Tokyo Game Show 2016’s massive exhibition floor showcased thousands of titles from hundreds of developers all around the world. Included in that showcase? A merry band of developers hailing from the Philippines. At a hall right beside the larger booths of mainstream companies, 6 teams of indie Philippine developers were busy speaking to media members and potential investors about their creations. At a separate hall, another Filipino showcased his game at an indie gallery set up by Sony.

We got a chance know more about the teams and learn their insight about the Philippines’ gaming industry.

The developers and their games

Popsicle Games, Squeaky Wheel Studio, Moocho Brain, Monstronauts, Keybol Games, and Unlibox were the six teams set up at the “Asia New Stars” section of Tokyo Game Show 2016. Some of the games demoed were developed for mobile devices. Others were for PC. Their genres ranged from platformers, to puzzles, to turn-based strategy.

Popsicle Games found their success in mobile gaming. They are focused on making “bite-sized fun for everyone.” The games they featured were Super Daivolter Z, Scratch 2 Win, Kong Want Banana, and Darkest Light. The studio has a penchant for making pop culture references. Daivolter Z for example, takes inspiration from popular mecha anime Daimos and Voltes V. Squeaky Wheel Studio is composed of only three members. They aim to be “a developer of thematically unique PC trategy and simulation games” and “make entertaining games that bring attention to current affairs in developing countries.” Their game, Political Animals, is a turn-based strategy game that parodies politics in developing countries. Players get to be a presidential candidate with an arsenal of crooked spies, journalists, and staff – all of which can be mobilized to outsmart the opposing candidate with tactics to sway and manipulate the voting populace. Sound familiar?

Moocho Brain Interactive Designs, a studio whose proposed mission is to “code for a more joyful world one line at a time,” demoed the intriguing Paper Worlds. While it’s still in development, Paper Worlds is already an eye-catching piece. It’s a puzzle-platformer with a twist. The levels are played on paper which you can fold in different ways. In order to solve the puzzle and escape the paper, you must figure out the right way to fold the paper so you can maneuver your character through the game. It’s a representation of the small team’s manifesto of “forging dreams into interactive art.”

Monstronauts, a team of ten, makes fun mobile games with a polished and colorful style – one of which is Pocket Arcade, which lets players relive classic arcade titles. They get to play a selection of arcade games, earn tokens and collect toys just like in the ’90s when arcades were at their most popular. Developed in collaboration with another studio, Kuyi Mobile, Pocket Arcade currently only features 3 arcade games. They plan to add more in the future, says this team that describes themselves as “a bunch of passionate geeks.” Keybol Games is run by just one man, Bari Silvestre. Silvestre showcased Kill the Plumber, an “anti-platformer” where the objective is to literally kill the protagonist who looks a lot like Nintendo’s Mario, the most iconic character in platformer games – and videogames, overall. He’s also at TGS 2016 to promote his new game Tower Fortress, a fast-paced action title with old-school platformer-style graphics. A demonstration of the game appears below.

Unlibox from Quezon City was formed in 2013. Their first game, Heroes Above, is a multiplayer strategy game for mobile that brings together elements from Plants vs Zombies and Clash of Clans. In the game, you select heroes to help you defend your crystals from the enemy team, and at the same time take down the opposing team’s crystals.

Last but not the least, Games by Nico’s Lithium City, was also on display at Sony’s indie showcase down at Hall 9. Its trailer released in June 2016 is shown below.

Getting to Tokyo Game Show

The teams are members of International Game Developers Association (IGDA) Manila, a local chapter of the global association that aims to empower developers around the world. With the help of the Philippine Board of Investments (BOI) and the Association of Southeast Asian Nations (ASEAN), they were able to secure their slots in one of the biggest gaming conventions in the world – save for Games by Nico which had been flown in by Sony. Their mission is to connect with the international gaming market and gain honest and unbiased feedback for their games, the developers told Rappler. According to the them, despite the language barrier, their games have gained a lot of positive feedback.

While not always full, their booths have gained enough interest to consider the trip a success. Pocket Arcade, Tower Fortress, and Kill the Plumber for example, drew in numerous visitors, and their respective developers believe it is most likely because Japan is said to have a large market for arcade and old-school video games.

Some of the teams are also currently looking for publishers who they believe can help their games reach a wider audience.

All of the teams and the members made the jump to the gaming industry through various ways. Some of them are young artists that either formed a group to build something for themselves, or were brought into the company by more veteran developers. Artists Eru Petrasanta and Steve Abanto, for example, were invited by Moocho Games’ head Khail Santia to collaborate on Paper Worlds. Others started off  as programmers, web developers, or artists in different industries. Keybol Games’ Bari Silvestre, for instance, made websites and blogs before jumping into game development.

All of them however were drawn in to gaming development for their love of video games. Silvestre muses that he was inspired by the classic platforming games he played on the iconic Family Computer. Tristan Angeles, design director of Squeaky Wheel, mentions an equally iconic series, saying that Sid Meier’s definitive 4X strategy series Civilization partly inspired Political Animals. 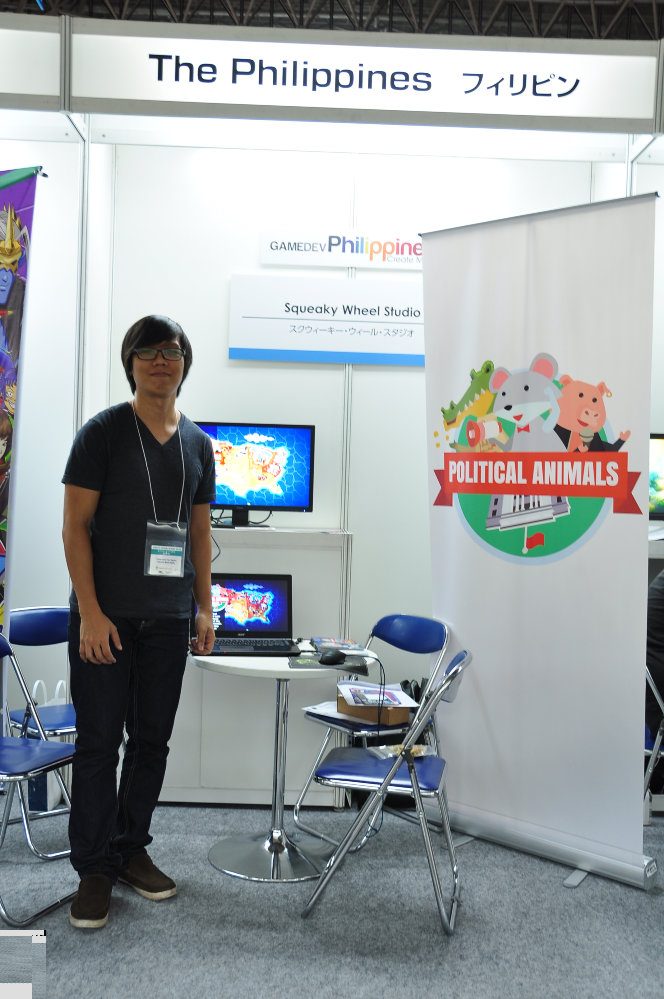 The challenges of being an indie developer in the Philippines

Despite the varied backgrounds, the devs agreed on one thing: Being a gaming developer and finding success in the Philippines is not easy. Said James Chua of Popsicle Games: “Making games is actually the easy part. Publishing and marketing [are some] of the hardest [aspects].” It’s not easy to find the support, sales, and resources required to move forward.

Funding is important for them to sustain their development, and some of them feel that it’s easier to gain funding and support from other countries than the Philippines. As a result, they tend to seek publishers outside the country.

On the consumer side, selling their games to the local gamer is just as hard, they said. The Philippine market is different from the international market. Compared to the foreign gamers, Filipinos aren’t really open to purchasing mobile games. If Filipinos want to play paid mobile games they will often resort to piracy, they said.

The country’s notoriously slow internet is also a problem for the developers. Many Filipinos are devoid of a smooth online mobile gaming experience because of the slow internet and so they tend to just stick to offline games. The slow internet makes it hard for developers to collaborate as large assets and files take time to download and upload. Other countries with better Internet services will logically be able to collaborate and coordinate faster. For the veteran developers in the group, the lack of formal education and experience in game development slows down growth and caps potential. Carlo Canlas and Jonathan Simbahan of Monstronauts found it a challenge to learn game design and development when they decided to develop games. In fact, most developers admit that they are self-taught, resorting to online courses and YouTube tutorials to gain knowledge and experience.

The future of Philippine game development industry is bright

Despite the challenges they’ve encountered, everyone in the Philippine delegation is hopeful for the country’s gaming industry. They all believe that the future of the local gaming industry is bright.

The developers cite the growing number of colleges and universities offering game development courses. While they still believe that self-teaching is a good way to learn game development, being formally educated in game development gives students a solid foundation to start their career. It will also give them the game development experience they need before they even graduate and start looking for jobs.

Unlibox’s Ryan Canteras noted that there is a growing number of talented developers in the country. He mentioned that many in the industry are already technically proficient and that they now only need the right exposure and experience to go global.

Words for the aspiring developer

If you’re also thinking of starting in game development, the Philippine delegation has some advice: Start now, start simple.

These words of wisdom were all inspired from the developers’ humble beginnings. They encourage aspiring developers to start learning whether it be through free online resources or getting formal education through universities. They advise developers to take inspiration from the games they play and learn from more experienced developers.

And for them, it’s also important to start simple. They all agree that it’s more practical and doable to create a simple game first before tackling huge “dream game” projects. Starting small, with simple mechanics, will allow them to slowly do more and create more over time.

They also want upcoming developers to understand that it will take a lot of time and practice for them to achieve their desired game. It’s also important to be patient, to be flexible, and also to be more involved with the industry’s community to learn more and gain more experience. – Rappler.com

(UPDATE: In a photo above, developer Nico Tuason was misidentified as the person standing on the right portion of the photo. Nico stands on the left.)