Koji Igarashi on the challenges of developing a crowdfunded game 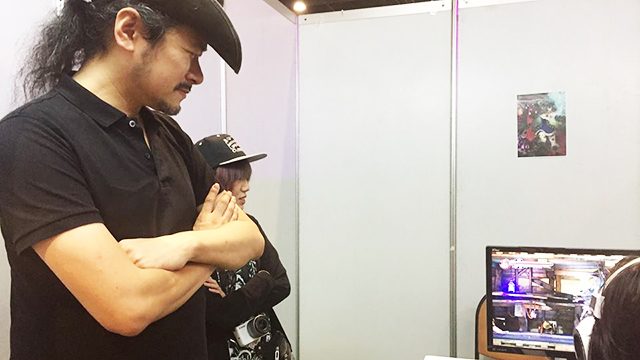 Facebook Twitter Copy URL
Copied
Once behind the most influential 'Castlevania' titles, the Japanese developer tells Rappler about the differences between developing games for a big studio and being crowdfunded

One of the highlights of ESGS was the arrival of Koji Igarashi, the beloved developer of the highly successful and influential classic Castlevania: Symphony of the Night as well as its predecessors.

IGA-san, as some would call him, was nothing short of surprised at the love and support that the Filipino fans showed for both his classic titles and his upcoming one named Bloodstained: Ritual of the Night.

On stage he also mentioned how diverse his Filipino fans were. Apparently, he was used to meeting and taking pictures with just adult burly men in different countries. But in the Philippines, he was surprised that he was also approached by women.

For the entirety of ESGS, people lined up at his booth eager to meet him and of course, try out his new game. We were able to speak with him for a brief moment before he had to return to his booth to accommodate his fans.

During the interview he revealed how he didn’t expect the Filipino fans’ support, the difference between crowdfunding a game and working under a company, the pressures that followed after creating a classic and influential game that fans all over the world adored, and his dream game.

Here’s an edited transcript of the interview:

Q: First of all, congratulations on your new, upcoming game, and welcome to the Philippines! There are a lot of Castlevania fans in the Philippines who are glad that you’re here. What do you think of the reception so far?

Koji Igarashi: When we create games, we always market them towards North America, Europe, and Japan. Upon coming here, we had no idea how many Filipino fans there were. And after coming here we found out that there were so many, so many fans here and so we were surprised and we didn’t expect that there were this much fans here.

Q: Bloodstained is obviously very inspired by Castlevania games, are there any other games that inspired the new game?

KI: Bloodstained was created based on the previous Castlevania series. And in order for the Castlevania fans to enjoy Bloodstained we had to create a gothic horror, 2D, action platformer piece – and this was already decided from the very beginning. I don’t know if I would consider this an inspiration but I’ve always wanted to create a game based on alchemy and crystal shards and that’s where the actual setting came from.

Q: What about pop culture pieces like books and movies? Were you inspired by any of those?

KI: So there’s not really much of a pop cultural reference but at the time that we were developing Bloodstained, there was a political problem in Japan. And when I was thinking of this political problem, there are people that would have an advantage and disadvantage when certain things take place.

Q: You probably have one of the most successful games on Kickstarter, and with crowdfunding, I imagine you now have a deeper connection with your community. What have you taken or learned from getting your game crowdfunded by your dedicated fans?

KI: When we started the Kickstarter, we were able to develop this game while listening to our fans’ voices. This is very new to me. Upon creating Bloostained and the demo we get to hear the backer’s opinion and we never got to have this chance kind of chance with the community. When we released the E3 demo, we even got a glitch report or a bug report and we weren’t really expecting that. So it’s been really helpful and yeah, it’s just been really new for us. 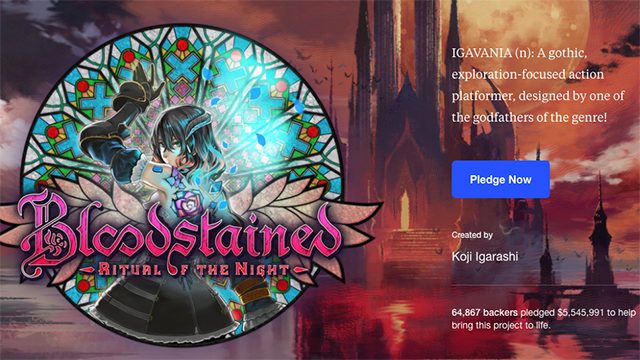 Q: Would you say it’s easier to have a game crowdfunded than going the traditional route of working for a company like Konami?

KI: Both are very difficult and I can’t say which one’s harder. When we were making this Kickstarter campaign, the difficult part about it is that we had to create all these materials way beforehand, before we even started the campaign. And this is something that we don’t usually do in the traditional way. But when the Kickstarter is funded we could see where the fans are, [and] what the fans want, but we always have to keep updating the fans and this is very difficult for us.

But when we’re in a bigger company we don’t know what’s going to sell and we have to kind of gather information from fans that we don’t even know if they would buy the game. So for Kickstarter you know that people are backing the game and these are the people that really want the game, and in that terms it’s very easy.

But to maintain the Kickstarter campaign, it’s very difficult and it’s not the same as the traditional way. So in that sense, both of them are very difficult.

Q: How does it feel to be able to create a game with so much impact and so much influence that many are still craving for that same classic formula you’ve created many years ago?

KI: Seeing the fans from over the years, these fans that are still wanting to play this kind of game, I’m very glad that I made this series continue. But at the same time, I also feel that I can’t let them down anymore. It’s very difficult for me to keep it up but at the same time it’s also why I continue.

Q: Why aren’t you confident that it’s not going to sell when you have a lot of fans following you and backing you up?

(Editor’s note: Igarashi’s translator answers for him here.) Answer: Because it’s completely different from Castlevania series. He wants to create a completely new game so it’s kind of a gamble for him.

Q: Is this game of yours a more modern one or an old-school type of game?

Igarashi’s Bloodstained: Ritual of the Night will be released in 2018. You can check out his Kickstarter page, here. The game currently has 64,867 backers and has garnered $5,545,991. – Rappler.com