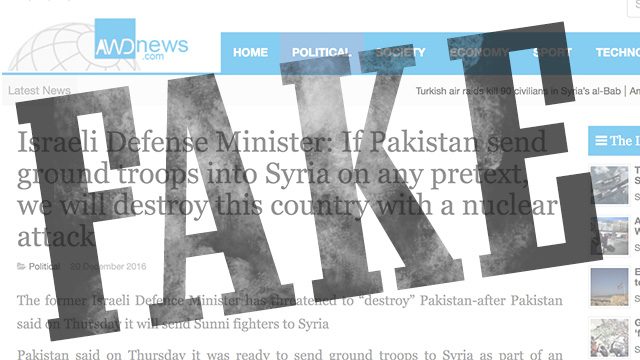 The fake news story in question published a supposed nuclear threat from the Israeli defense minister. The headline said: “Israeli Defense Minister: If Pakistan send ground troops to Syria on any pretext, we will destroy this country with a nuclear attack”.

The story was published on the site “AWD News”, which has been tagged as a fake news site by fact-checking organizations, The Guardian said.

The incident demonstrated the power of fake information to create real ruckus. The news prompted Pakistan’s defense minister Khawaja Mohammad Asif to warn Israel on Twitter, “Pakistan is a nuclear state too.”

Israel’s Ministry of Defense responded shortly after, clarifiying that the initial report was completely fictitious.

The tweets from Israel appear to have quieted matters. As of publication, no further tweets related to the issue have been posted by Pakistan’s defense minister. – Rappler.com