MANILA, Philippines – If you travel a lot around the Philippines, and are after the fastest LTE speed, having Smart as your service provider might be what you want. That’s according to an October 2017 article by industry monitor OpenSignal, which found out that Smart’s LTE speeds are faster across the major regions in the Philippines.

OpenSignal, like Speedtest, collects data from users using the OpenSignal app to test their speed and to find out where there is strong data signal. The article uses data from over a billion OpenSignal tests made from May 1 to July 31, 2017. (READ: PH 3G and 4G speeds still below global average – study) The findings reveal that Smart’s LTE is faster than Globe in all but one of the Philippine regions measured: North Central Luzon, National Capital Region, South Luzon, and Mindanao. In Visayas, the two telcos are tied.

The regional breakdown of the data mirrors the national picture as revealed in OpenSignal’s mobile networks report in September, which found out the following things:

OpenSignal noted, however, that speeds put up by the two networks were still very much below the global 4G average speed of 16.2 Mbps and the global 3G average of 4.4 Mbps. (READ: Globe prepaid promo offers 1GB of data for P15)

In the regional breakdown, OpenSignal showed which areas were lagging behind: 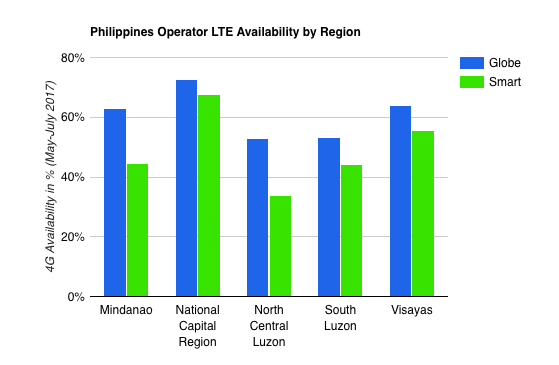 The area where availability is worst is North Central Luzon, where Globe only has around 50% availability and Smart is at 34%.

As for 4G speed, Smart exceeded its national average of 10.6 Mbps in the National Capital Region and in Mindanao: 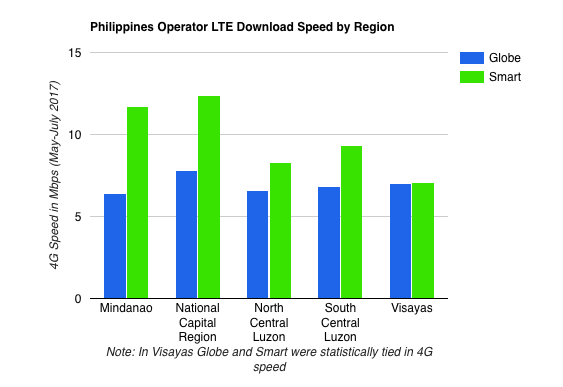 In those two regions, Smart reached speeds of around 11 to 12 Mbps, beating Globe by more than 4 Mbps in both cases, said OpenSignal. In the other regions, the dominance was less pronounced, and Globe had, in fact, tied Smart in the Visayas. – Rappler.com