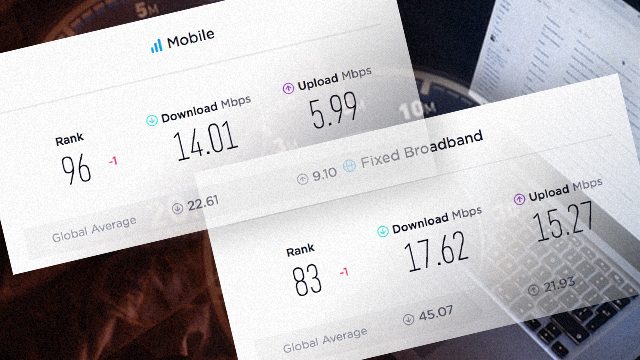 Facebook Twitter Copy URL
Copied
The country goes down from the 95th spot to the 96th in the mobile speed rankings, and from the 82nd to 83rd place in fixed broadband rankings

MANILA, Philippines – The Philippines, while said to be steadily increasing its fixed and mobile broadband speeds, went down one notch in both types of rankings in the latest Ookla Speedtest Global Index.

The Speedtest Global Index is a monthly comparison of internet speed data from around the world, based off of Speedtest ratings taken on the Ookla Speedtest service.

In terms of mobile internet speeds, the Philippines ranks 96th, down from 95th place last month. Mobile download speeds are now at 14.01 Megabits per second (Mbps) and upload speeds are at 5.99 Mbps.

Most improved over time in Asia?

Taking off from the news, Globe Telecom opted to focus on one specific positive: the Philippines has not stagnated in its quest for faster speed in fixed broadband internet.

In a statement, Globe pointed it has the most improved speeds in Asia for fixed broadband, as it is up 403% from 3.5 Mbps speeds in 2014.

Despite these improvements, the country still lags among other Asian countries which already enjoyed faster speeds but had diminishing returns when it came to improving speeds. The second most-improved country in their list, Malaysia, improved 391% – from 5.9 Mbps speeds in 2014 to 26.9 Mbps. It also ranks 58th, up 3 spots from the previous monthly index. – Rappler.com