Mar 6, 2019 2:23 PM PHT
Agence France-Presse
Facebook Twitter Copy URL
Copied
Huawei kicks off the year with an aggressive PR campaign that has seen reclusive founder Ren Zhengfei suddenly give a series of interviews with foreign media to deny the company is a threat 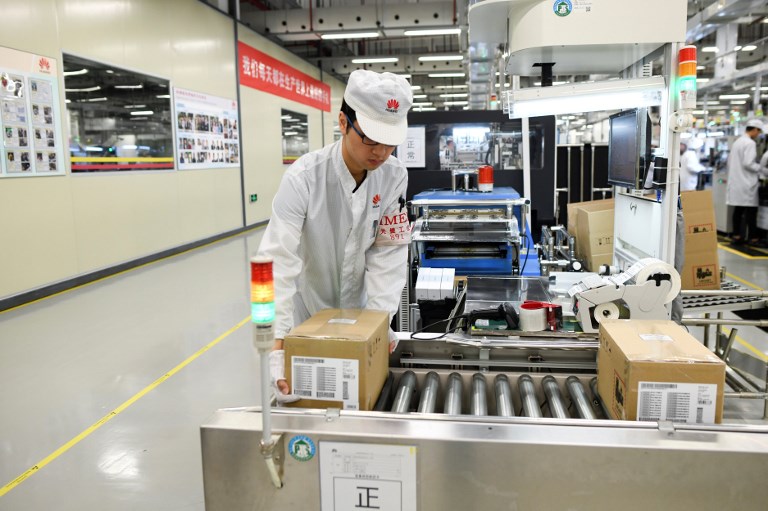 DONGGUAN, China – Chinese telecom giant Huawei gave foreign media a peek into its state-of-the-art facilities on Wednesday, March 6, as the normally secretive company steps up a counter-offensive against US warnings that it could be used by Beijing for espionage and sabotage.

Huawei has kicked off the year with an aggressive PR campaign that has seen reclusive founder Ren Zhengfei suddenly give a series of interviews with foreign media to deny the company was a threat, while executives have dismissed the US warnings as baseless.

The charm offensive went into another gear Wednesday as Huawei welcomed media to its tightly-guarded facilities in southern Guangdong province.

“I don’t think this is any change in their DNA so much as a Beijing communist-style ‘we are going to pound you into submission’,” Christopher Balding, a China expert at Fulbright University in Ho Chi Minh City, told AFP.

Journalists toured a huge factory floor with 35 highly automated assembly lines in Dongguan, where an array of robotic arms put together a Huawei P20 smartphone every 28.5 seconds.

Reporters were then taken past rows of mammoth buildings to the Huawei Independent Cyber Security Laboratory, whose director Wang Jin rejected fears that the company could serve as a Trojan horse for Chinese authorities.

“Our most basic red line is that our products cannot have any backdoors,” Wang said.

Foreign journalist visits are hardly routine at a headquarters where high-tech labs and manufacturing facilities employ 60,000 people, but these are unusual times for the company.

The United States says Huawei equipment could be manipulated by China’s Communist government to spy on other countries and disrupt critical communications.

Washington is urging governments to shun the company just as the world readies for the advent of ultra-fast 5G telecommunications, an advancement that Huawei was expected to lead and which will allow wide adoption of next-generation technologies like artificial intelligence.

Huawei’s Chief Financial Officer Meng Wanzhou, Ren’s daughter, also faces a court hearing on Wednesday in Vancouver on a US extradition request. Two Canadians have been detained in China in suspected retaliation over her arrest.

During the tour, journalists were served coffee in cups featuring an image of a lighthouse and the words: “Lighting the way home for Meng.”

The US Justice Department accuses Huawei and Meng of circumventing US sanctions against Iran. Two affiliates also have been charged with stealing trade secrets from telecommunications group T-Mobile.

“They should be able to ride this out,” Balding said.

“It’s not realistic to expect the entire world to shun Huawei and that probably wouldn’t be good anyway.”

Founded by Ren in 1987, Huawei has espoused a relentless “wolf” ethos that executives say fuelled its rise to become the world leader in telecom network hardware.

It remains to be seen how the new charm offensive will play out, but the wolf may already smell blood.

After intense recent lobbying by Huawei, reports have suggested Britain and New Zealand may walk back earlier indications that the company would be frozen out of their telecom plans.

On Thursday, Huawei Chairman Guo Ping will hold a news conference at the Shenzhen headquarters that may be the real reason for the media tour’s timing.

The New York Times on Monday, March 4, cited anonymous sources saying Huawei this week will announce plans to sue the US government for barring American federal agencies from using the company’s products.

The topic of the news conference has not been disclosed, but a big announcement would allow Huawei to seize back the narrative from Meng’s extradition hearing.

Huawei declined to comment publicly on the Times report.

Opening its sprawling grounds also is a chance for Huawei to show that it is a global player not to be trifled with.

Its Shenzhen headquarters –near Dongguan – has cutting-edge laboratories, hotels, swimming pools and fitness centers, a dozen cafeterias, and a Huawei University where it trains staff as well as foreign customers and partners.

Sceptics, however, say it is highly unlikely that Ren, a former Chinese army engineer, could have steered his company to such heights in such a strategic sector without the support of Beijing, which has clearly stated its goal of becoming the world’s high-tech leader. – Rappler.com