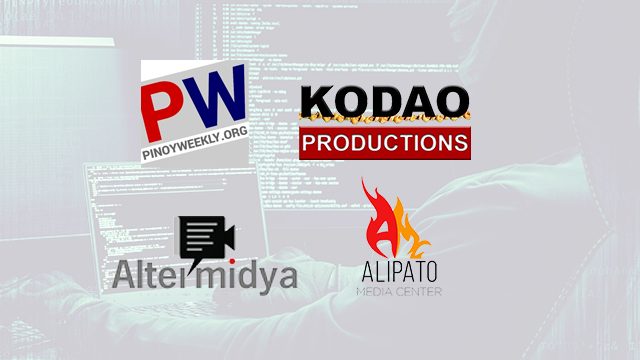 Facebook Twitter Copy URL
Copied
'The magnitude, scope, and scale of the cyberattacks suggest that they were targeted, deliberate, and organized,' the complaint reads

MANILA, Philippines – Alternative media groups on Friday, March 29, filed a civil case against groups and individuals believed to be behind the cyberattacks on the news groups’ websites.

Suniway Group of Companies Inc and its officers

University of the Philippines journalism professor and Bulatlat associate editor Danilo Arao said they filed the case past 11 am Friday at the Quezon City Regional Trial Court. He confirmed the case was raffled to Branch 220.

“The magnitude, scope, and scale of the cyberattacks suggest that they were targeted, deliberate, and organized,” a copy of the complaint read. The groups said the cyberattacks “could not have occurred without being orchestrated and well-funded.”

“The attackers employed a wide array of technological means and methods to conduct various forms of DDoS attacks against Plaintiffs’ websites…. Individual defendants, being private individuals who directly or indirectly obstructed, defeated, violated, impeded or impaired Plaintiffs freedom to maintain publications shall be liable to the latter for damages pursuant to Article 32(3) of the Civil Code.”

The National Union of Journalists of the Philippines (NUJP) in a statement said Bulatlat was the first of the news groups to be attacked in late December 2018. An IT expert then warned Bulatlat‘s editorial staff that this may be a case of a distributed denial of service (DDoS) attack.

A DDoS attack is a type of malicious cyberattack in which a site or service is overhwhelmed by an attacker increasing the traffic to it beyond what it can support, thus preventing the site or service from operating properly. This can by done by the attacker using a network of computers and devices he has compromised for that purpose.

“Qurium’s investigation resulted in the discovery of Defendants IP Converge and Suniway as the sources of attacks,” the complaint read.

In a detailed report on their website, Qurium said they attempted to contact the Cyber Security Philippines Computer Emergency Response Team and IP Converge regarding the DDoS attacks with their findings, but did not get any response.

The NUJP on Friday said it “fully supports” the civil case, pointing out that the filing happened on the 25th anniversary of the Internet in the Philippines.

“This civil action sends a clear message to those who seek to silence the independent Philippine media: Not only will you fail, we will fight back,” the NUJP said.