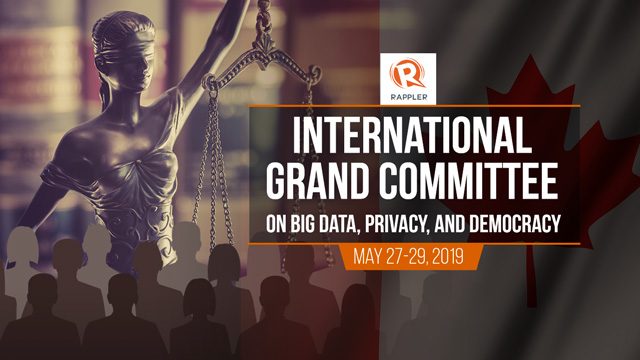 Bookmark this page to watch the next session on Tuesday, May 28, at 8:30 PM Manila time

OTTAWA, Canada – The Canadian Parliament’s Standing Committee on Access to Information, Privacy and Ethics hosts the hearing of the International Grand Committee on Big Data, Privacy and Democracy from Monday May 27 to Wednesday May 29.

Witnesses from at least 11 countries will be appearing before representatives to testify on how governments can protect democracy and citizen rights in the age of big data.

Representatives from Twitter, Google, Microsoft, Amazon and the Mozilla Foundation will also be attending and giving testimony. Apple has yet to confirm attendance.

A CNN report says Facebook leaders Mark Zuckerberg and Sheryl Sandberg were summoned by the Canadian parliament, but refused to attend, and sent public policy officials Ken Chan and Neil Potts instead.

The CNN report quotes a senior Canadian official saying that Zuckerberg and Sandberg may be held in contempt of parliament. – Rappler.com