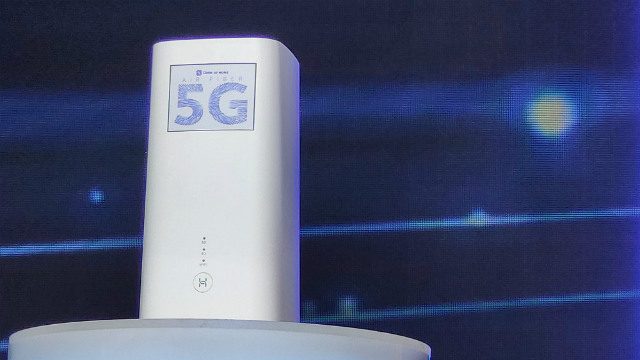 Facebook Twitter Copy URL
Copied
Globe At Home Air Fiber 5G is a fixed service much like traditional wired fiber services, except a base station beams connectivity to the home as opposed to delivering it via a last-mile wired connection

MANILA, Philippines – Globe CEO Ernest Cu breathed what was almost a sigh of relief as he announced the arrival of their first 5G-powered service, Globe At Home Air Fiber 5G, Thursday, June 20, successfully hitting their 2018 promise of launching 5G services by the second quarter of 2019.

“It is still the second quarter, right?” Cu remarked on stage at the launch event, poking fun at the fact that they narrowly made the deadline. The year’s second quarter ends in 10 days.

With the launch of Air Fiber 5G, Globe becomes the first service provider to launch a 5G-powered service in the Philippines, Southeast Asia, and Cu added, 3rd in Asia after South Korea and Japan.

To be clear, Globe At Home Air Fiber 5G isn’t mobile wireless 5G. It’s a fixed service much like traditional wired fiber services – except, in this case, a base station beams connectivity to the home as opposed to delivering it via a last-mile wired connection. This wireless connectivity, Cu explained, is a huge, huge advantage as it allows them to deliver fiber-like speeds without having to go through the permitting processes when laying out their wired networks and rolling out fiber cables.

5G, thanks to its higher bandwidth and speed compared to 4G, should theoretically be able to allow this fiber-like experience minus the wires.

“Globe At Home Air Fiber 5G makes use of fixed location wireless radios instead of fiber optic cables which enables the company to go over the circuitous approval process of deploying a fiber optic cable – a task which proves to be arduous and involves securing multiple permits from local government units,” Cu explained.

“The right of process can sometimes take years to obtain, causing drastic delays in fiber optic roll-out completion,” he added.

The Globe At Home Air Fiber 5G postpaid plans offer speeds up to 100Mbps and super-sized data packages of up to two terabytes in areas in Pasig, Cavite, and Bulacan. It will be available to eligible customers in July 2019. Plans are priced at P1,899 per month for up to 20Mbps; P2,499 for up to 50Mbps; and P2,899 for up to 100Mbps. All come with up to 2TB data capacity.

Air Fiber 5G is part of Globe’s plans to connect two million homes by 2020. Cu said that through this fixed wireless strategy – even prior to 5G – they have increased their home broadband subscriber base by 55.1% to 1.7 million in the first 3 months of 2019 from 1.1 million in the same period in 2016.

Globe At Home Air Fiber 5G makes use of the Huawei 5G CPE home router, which is powered by Huawei’s Balong 5000 chip, the world’s first 5G multimode modem chipset. This simply means that the device is the first router that can support both 4G and 5G commercial applications, which allows it to switch to a 4G signal if the 5G signal is not strong enough. – Rappler.com