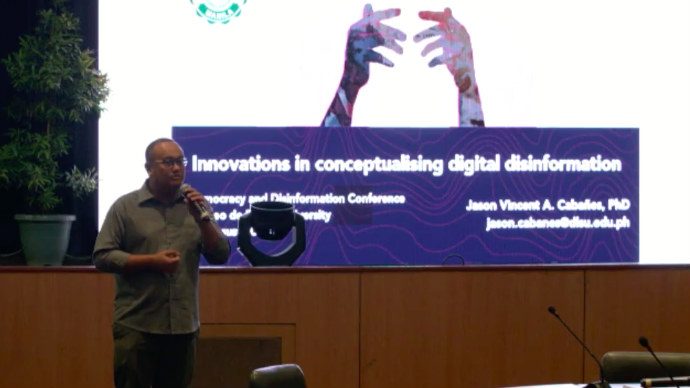 Facebook Twitter Copy URL
Copied
Many disinformation architects are professionals from the PR and advertising industries, who have left their big firms to essentially market politicians

MANILA, Philippines – Money appears to be a big motivator for individuals who’ve found themselves in the disinformation business.

That’s what one expert, De La Salle University professor Jason Cabanes, has found in his research. Cabanes presented some of his findings, done in collaboration with  another expert, Jonathan Ong, at a disinformation conference at the Ateneo de Davao University on Friday, August 23.

Thirty million pesos – that’s the ballpark figure that real disinformation producers said they’d get from their political clients for a 3-month campaign. Cabanes talked to real people, real Filipinos who plan, produce, and strategize disinformation campaigns according to the objectives of their clients.

Much of the money goes to what Cabanes calls the “chief architects” – the head of the campaigns crafting the blueprint, and the big strategy to get the message out there, to manipulate. These architects, Cabanes said, are professionals.

They’re not merely a group of people with computers who just started making memes for money. Mostly, these are professionals from the PR and advertising industries, who have left their big firms, and have moved on from marketing specific companies, brands, and celebrities to essentially marketing politicians and political messages, Cabanes said.

Their motivation? Some of them have simply gotten bored of the brands and are looking for another challenge. Some of them see themselves as “pioneers” in the disinformation industry and as the “new breed of political communications experts,” Cabanes said. Like crafting a plan for a brand, theycreate the concept, they create a brand bible, a campaign plan, and a campaign hashtag.

Cabanes asked them how they justified to themselves and others the work they do – what he calls the “how do you sleep at night?” question. Some resort to fictionalization, or a manner of projecting oneself as a fictional character to distance oneself from reality.

One architect relates the job to being like Game of Thrones’ Olenna Tyrell – a powerful matriarch in the TV series – moving the pieces around, and manipulating the playing field.

Beyond the ego trip, of course, there’s the matter, as well, of millions of pesos on the line.

A small part of the money goes to the influencers – the second level below the architects. The ones that Cabanes got to talk to reportedly get around P30,000 per month, but may well exceed that should their posts get high levels of engagement.

Many in this tier are in this job so that they can augment their salary, Cabanes said. “These are those who belong in the ‘precarious middle class,’ and they want to solidify their place with extra income. They want to enjoy the middle class lifestyle.”

These individuals are people with about 50,000 to 2 million followers on Facebook or Twitter. Hit that follower count, and the chief architects start to approach you, Cabanes said. These are people working in digital media industries, and are very well-versed in digital marketing techniques and search engine optimization.

Cabanes talks about normalization as a way for influencers to justify what they’re doing. According to the influencers, it’s no different from marketing brands. Their line of thinking, Cabanes said, is that “if it’s already something they do with brands, how could it be any different from ‘fudging’ the truth for politicians?”

In political disinformation, instead of enhancing sales for a particular brand, the goal is to increase the number of people subscribing to lies and half-truths – ultimately for the benefit of the paying client and whatever their political goals are.

Cabanes calls it a normalization of deception.

There are two types of these influencers: visible and invisible. The visible ones are the personalities one may see in Facebook with big followings such as Mocha Uson. But Cabanes said the use of these visible influencers have gone down because their reputations can easily be taken down, and thus, the campaign with it.

More used now are invisible influencers – anonymous pages with big followings whose stewardship people don’t readily know. These are insidious, using apolitical content such as inspirational quotes, jokes, prayers, and words of wisdom, to keep a following, while subtly mixing in the political content.

In the third and final tier, Cabanes said, are the community-level fake account operators. These are people who do script-based work, copy-pasting messages passed on from the architects and onto Facebook groups and other online venues, with the goal of amplifying a message and creating an illusion of engagement.

Cabanes said that they weren’t able to talk to a lot of them as they are usually placed in the bailiwicks of politicians as though working at a call center. A lot of them are usually college students looking for tuition money and extra income.

With money trumping scruples, Cabanes suggested a few things to combat what seems to have become more than a cottage industry. There are, of course, the big picture things such as holding the platforms Facebook and Twitter to account.

But beyond that, Cabanes said that we need to find ways to get Filipino digital workers – cheap labor that has precluded the need for the use of bots in the Philippines – legitimate, ethical work. He also called for campaign finance regulation for politicians, and self-censorship in the influencer industry. – Rappler.com