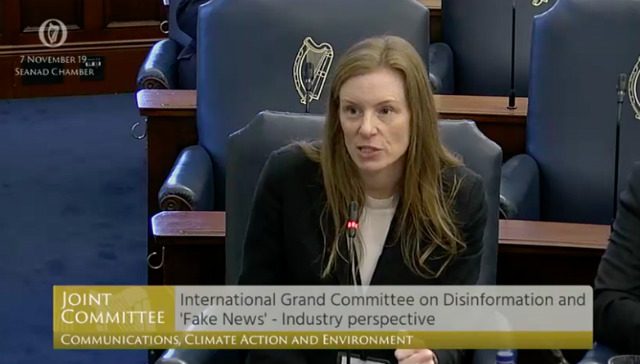 MANILA, Philippines – Representatives from Twitter, YouTube, and Google were present at the 2019 assembly of the International Grand Committee on Disinformation and Fake News in Dublin, Ireland, on Thursday, November 7, but it was Facebook which was grilled the most by global parliamentarians.

Facebook, represented by company vice president of content policy Monika Bickert, was questioned on its policy of categorizing political speeches as something that’s beyond fact-checking, its proposed oversight body for appeals on content takedowns, the recent open letter made by employees concerning political ads, and the granularity of their ad-targeting tools.

In the 90-minute session, most of the questions were aimed at Bickert. The fact was not lost on the parliamentarians, and at least one apologized to the other participants that they were directing their question to Bickert. Facebook, the biggest social network today with 2.8 billion users, has been on the hot seat for a while now, and the session is only further proof of how big the controversies it faces are.

Australia’s Milton Dick, the first to question Bickert, asked if Facebook would follow Twitter’s stance of disallowing political ads altogether. “We are very open to what the next steps are to improve our political advertisements and how people encounter them on Facebook,” Bickert said. (READ: Threaten to shut down online platforms to create leverage, says ex-Facebook investor)

Various times, Bickert was also asked about just how much they make from political ads. She stuck to the company’s usual answer as of late: just a small portion, hence they’re not financially motivated to keep running these ads, and that they allow politicians to use the platform in the name of free speech. (READ: Facebook hit by ‘tsunami’ of bogus political news – NGO)

Facebook argues that it is not the role of a private company to censor political speech. “We’re not the truth police for the world,” Bickert said.

US congressman David Cicilline slammed the free speech answer, calling it “a cloak.”

“I think your notion that you do fact-checking for a number of other things but you don’t do fact-checking for political ads is…and the cruel irony is your company is invoking the protections of free speech as a cloak to defend your conduct which is in fact undermining and threatening the very institutions of democracy,” he said.

Cicilline also put a number on just how much Facebook makes from political ads: $330 million dollars or 0.5% of the company’s total revenues, as CEO Mark Zuckerberg has supposedly mentioned.

Bickert, though, conceded that the issue on these political ads can’t be solved by themselves, and said that government regulation would help in terms of strictly defining what a political ad is, who’s allowed to run political ads, what steps they have to take in order to run them, and how much ad targeting they can do.

“We hear views across the spectrum. Indeed, we solicit them. When we refine our policies, part of that process involves talking to people across the company but also civil society groups, and experts outside the company. We want that diversity of thought,” Bickert answered. – Rappler.com