May 29, 2020 4:25 PM PHT
Agence France-Presse
Facebook Twitter Copy URL
Copied
(3rd UPDATE) Twitter says it is placing a 'public interest notice' on a Trump message about protests in Minneapolis over the death of an unarmed black man at the hands of the police 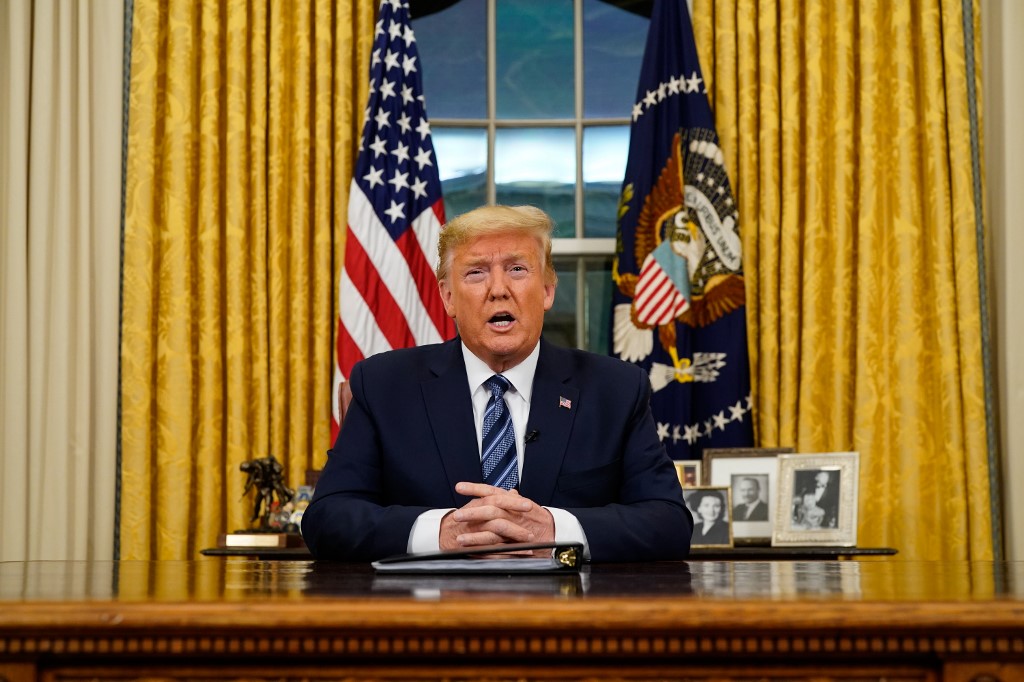 WASHINGTON, DC, USA (3rd UPDATE) – Twitter concealed one of Donald Trump’s tweets on Friday, May 29, for “glorifying violence,” ramping up a dispute with the US president who says social media companies censor conservative voices like his.

In a move bound to infuriate one of the platform’s most followed users, Twitter said it was placing a “public interest notice” on a Trump message about protests in Minneapolis over the death of an unarmed black man at the hands of the police.

In a late night tweet, Trump wrote: “These THUGS are dishonoring the memory of George Floyd, and I won’t let that happen. Just spoke to Governor Tim Walz and told him that the Military is with him all the way. Any difficulty and we will assume control but, when the looting starts, the shooting starts. Thank you!” 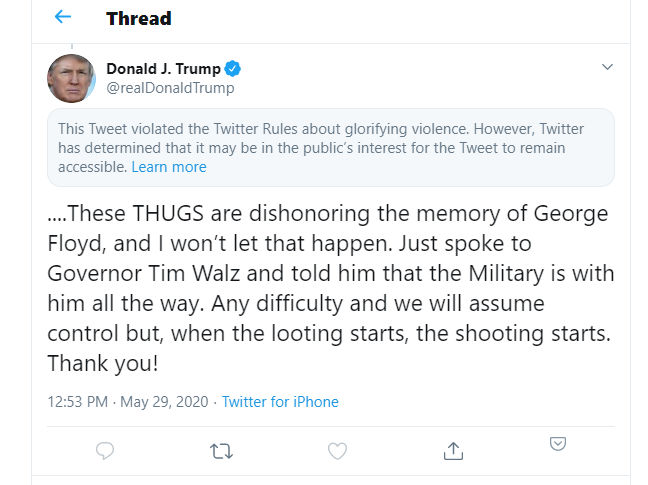 Hours later, the micro-messaging platform hid the tweet behind a message that said it “violates our policies regarding the glorification of violence based on the historical context of the last line, its connection to violence, and the risk it could inspire similar actions today.”

“As is standard with this notice, engagements with the Tweet will be limited. People will be able to Retweet with Comment, but will not be able to Like, Reply or Retweet it.”

Trump, who has more than 80 million followers on Twitter, lashed out at the platform on Thursday, signing an executive order seeking to strip social media giants of legal immunity for content they carry. (READ: Trump signs order targeting social media after tweets flagged)

The order calls on government regulators to evaluate if they should be eligible for liability protection for content posted by their millions of users.

The move, which was slammed by critics as a legally dubious act of political revenge, came after Twitter labelled two earlier Trump tweets – on the increasingly contentious topic of mail-in voting – as misleading.

If enforced, the action would upend decades of precedent and treat internet platforms as “publishers” potentially liable for user-generated content.

Trump told reporters at the White House he acted because big tech firms “have had unchecked power to censor, restrict, edit, shape, hide, alter any form of communication between private citizens or large public audiences.”

“We can’t let this continue to happen,” Trump said.

Critics said however Trump has no authority to regulate private internet operators or change the law, known as Section 230, which backers say has allowed online platforms like Facebook and Twitter to flourish.

Eric Goldman, director of the High-Tech Law Institute at Santa Clara University, said the order was “more about political theater than about changing the law.”

The order “is not legally supportable – it flies in the face of more than 900 court decisions,” Goldman said.

The White House seeks to sidestep the provisions giving internet firms immunity by treating them as publishers operating in part of a “public square.”

“Twitter, Facebook, Instagram, and YouTube wield immense, if not unprecedented, power to shape the interpretation of public events; to censor, delete, or disappear information; and to control what people see or do not see,” the executive order said.

While the Trump order would not prevent platforms from moderating content, it could open them up to a flood of lawsuits from anyone who claims to be harmed by content posted online.

Critics said the action represents a dangerous effort by the government to regulate online speech.

“Social media can be frustrating. But an Executive Order that would turn the FCC into the President’s speech police is not the answer,” said Jessica Rosenworcel, a Democratic member of Federal Communications Commission, one of the agencies tasked with enforcing the executive order.

Matt Schruers, president of the Computer & Communications Industry Association, a trade group, warned that “retaliation against the private sector for fact-checking leadership is what we expect from foreign autocracies, not the United States.”

Internet firms have denied Trump’s claims of bias, and point to his massive social media following. But the president’s move plays into his narrative ahead of his difficult November reelection battle that liberal forces are trying to censor Republicans.

A wider debate has long been underway on the power that social media companies wield and what responsibility they bear for posts that are misleading or hurtful.

After long resisting calls to censure Trump over his frequent factually inaccurate posts, Twitter on Tuesday flagged the president for the first time for making false claims.

Trump had tweeted – without any evidence – that more mail-in voting would lead to what he called a “Rigged Election” this November. – Rappler.com