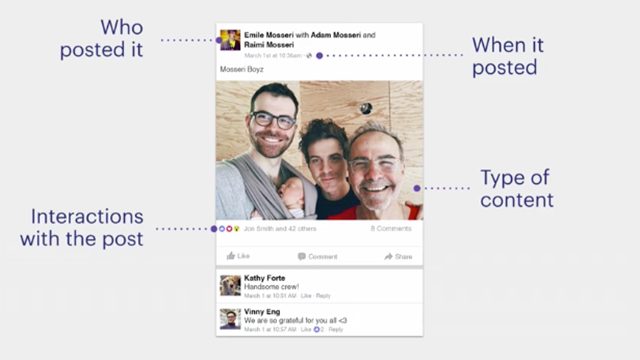 As many netizens are aware of, Facebook employs an algorithm that allows it to select the stories and posts it deems most relevant to you. In the social network’s older days, the flow of content was a lot more basic: It delivered the posts chronologically.

The Facebook feed today is more nuanced. To choose what stories appear at the top of your News Feed, Facebook’s algorithm assigns a personalized “relevancy score.” This score is different for everyone, generally depending on the stories you engage with. Ideally, this is supposed to make the Facebook’s feed as personal as possible.

We review these basic factors that determine the personalized relevancy score of each story, as discussed by Adam Mosseri, VP of Product Management for News Feedback back in April.

While the ones below are some of the general factors, it’s also important to note that Facebook regularly tweaks their algorithms. These tweaks are reported on the “News Feed FYI” section on the Facebook Newsroom. The section is an official source of information for anyone looking to understand why certain posts appear more frequently on their feed.

The algorithm checks who among your friends or what pages you interact with the most and gives their posts priority. This is why you might have noticed that there are some friends whose posts you haven’t seen in a while even though you haven’t unfollowed or blocked them. If you haven’t interacted with them in a while, their posts will be relegated to the bottom of your News Feed or not appear at all. Visiting profile pages and tagging them or being tagged in photos or posts also adds to the relevancy score of Facebook friends and pages.

In a June update, Facebook started prioritizing posts made by friends rather than pages, placing them higher on one’s feed. To minimize the effect on pages’ reach, Facebook suggested that pages post “things that their audience are likely to share with their friends.”

The algorithm keeps track of posts with high engagement and marks them as interesting, even if the interaction came from people who aren’t on your friends list.

That’s why social media personalities and Facebook business pages try their best to put out compelling posts, with some even resorting to clickbait and chainmail-style “share if you agree” posts. The amount of clickbait on the network swelled enough to prompt Facebook to crack down on these. (Read: How Facebook algorithms impact democracy) The algorithm also checks what types of posts you interact with the most: statuses, links, photos, videos, events, or content from a certain app. If you often watch videos, then it will show you more of these on your feed. The algorithm also checks what type of videos you watch by determining who posted the video and finds similar or related videos to show you. The more you consume a certain type of content, the more it is fed to you.

In the most recent Facebook Newsroom article about their News Feed, the social network said that they identify “informative” posts and prioritize these. They identify what’s informative through what they call the “Feed Quality Program” powered by global crowd-sourced surveys of “tens of thousands of people per day.”

A post’s informativeness is then taken into consideration with the other basic personal relevancy factors.

4) When it was posted

More recent posts are ranked higher by the algorithm, but the beauty of it is that it also checks when you last logged in or checked your News Feed. Old high-ranking posts will be shown on your feed if they were posted during the time you were offline so you can see them when you log in again.

If you’re the type who checks Facebook every few minutes or hours, then the algorithm prioritizes most recent posts. If, however, you go offline for days or weeks at a time, the algorithm will show big stories, such as someone getting married or moving to a new job, even if they were posted days ago. 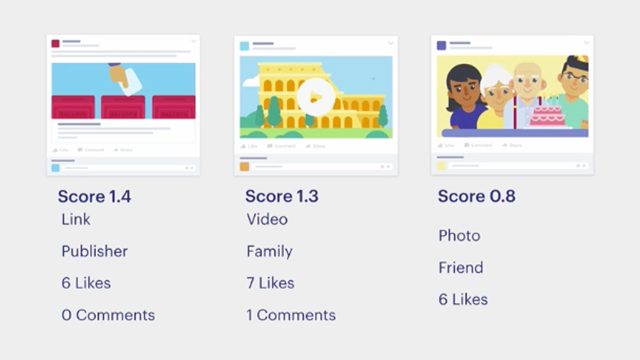 How do you feel about your Facebook News Feed? Do you think that Facebook should provide more options to control what you see? – Rappler.com