In ‘Civilization VI,’ Gandhi might not be as nuke-happy anymore 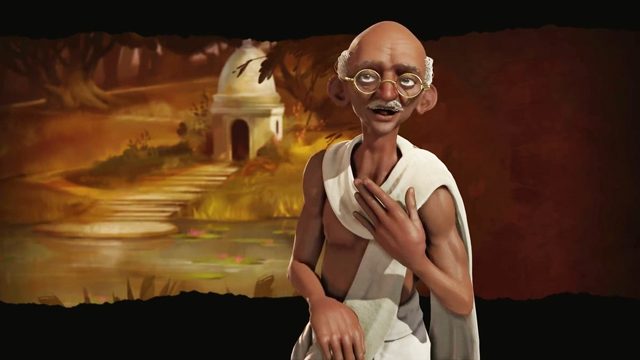 Facebook Twitter Copy URL
Copied
In our playthrough, a gameplay change in the new 'Civ' game curbs a long-running 'bug' in the series

So there you were, playing a session of Sid Meier’s Civilization, happily growing your civilization’s economy or fending off an aggressive neighboring nation. Suddenly, nukes drop on your progressive country. You can only scream in frustration: “GAAANDHI!!!!”

Yes, that Gandhi. In real life, the Indian leader was known for his peaceful ways. But in the beloved strategy series Civilization, Gandhi – one of the many historical leaders starring in the game – is known for nuking people. For the uninitiated, it’s become a running joke of sorts. “Welp, there goes Gandhi again,” an experienced player might non-chalantly mention when the leader cooks up a nuclear attack.

“But how could that be?” you ask, “Gandhi is known for his peaceful ways!” That is true – but it’s this peaceful reputation that inadvertently caused a bug that triggered Gandhi’s nuke-loving predilection.

Leaders in the Civilization games, or just Civ for short, are assigned tendencies and ratings in certain behaviors according to how they acted historically. Hence, leaders like Attila and Genghis Khan have high military and aggression ratings; conversely, Gandhi’s are really low.

At that point in the game, bugged-out Gandhi would have also researched and unlocked nuclear weapons – nuclear missiles he’d launch at the slightest provocation. The developers and the players found this behavior hilarious so Gandhi’s love for the use of nuclear weapons has been retained in all of the succeeding Civilization games.

As an example, below is a portion of Civilization V’s AI leader behavior chart, showing Gandhi’s “Build Nuke” and “Use Nuke” attributes: At the start of a game, each of the attributes gets modified by a random dice roll which can range from -2 to +2. Hence, Gandhi’s 12 out of 10 rating in nukes assures that he will always get a max rating for that tendency even if the dice roll ends up at -2.

Now, will Gandhi be as nuke-happy in the newest game in the series, Civilization VI? The latest entry was released last October 21, reducing the sleeping hours and productivity of gamers everywhere. We only had one question in mind: How long will it take before Gandhi nuked someone?

For this experiment, the game parameters include a small-sized map (best for six players), standard game speed, prince difficulty, and a “continents” map type. I play as Trajan leading Rome, while all AI players are random except for Gandhi leading India.

As I played through the early game, I noticed that the art style shifted to a more cartoony style compared to the previous game. It takes some getting used to but I admit that it’s growing on me. It also helps that the animations for the leaders are very good in portraying emotions. Another thing I quickly noticed is how great the music was. An iconic or culturally significant song is used for each civilization such as “Scarborough Fair” for England, “Kalinka” for Russia, and “Recuerdos de la Alhambra” for Spain. What makes it so good is that the music starts out very simple, with only one or two instruments. But as you progress throughout the ages, more instruments and more layers are added and you get the full orchestra treatment for some of the pieces when you get to the late game.

Another thing which was immediately apparent was that the tech tree underwent a major revamp. Instead of a single tech tree for everything, it has been divided into “Technology” and “Civics.” Included in Technology are mostly scientific concepts or discoveries such as metal casting and cartography. Civics meanwhile includes things from governance or philosophy such as divine right, and civil service. Connected to the Civics tree is your empire’s government type and policies. You can now select a government type once you’ve researched it and policies give you certain bonuses.

As I built up my empire in these early stages, I did not come across Gandhi and India. As this was on the continents map archetype, the only explanation is that he spawned on another continent. No problem, since what we’re waiting for is in the late game anyway – the “Atomic Era” to be specific.

Expanding cities and the empire

The first two ages, Ancient and Classical, are in the rear-view mirror and I’ve managed to progress to the Medieval Age. I have been expanding both my cities and my empire. The latter is a bit easier as one of the innate bonuses for playing as Rome are free and instant roads to your capital city (obviously, Rome) if the new city isn’t too far from the capital. The expansion of the city is the more difficult one of the two. This is because one of the major changes from Civ V to Civ VI is the “unstacking” of cities. In previous games, a city takes up just a single tile and you can build everything in that one tile. Now however, you need to build specialized districts, such as campuses and commercial districts, which take up one tile. Wonders are also built this way. This means that planning and placement are very important because districts get bonuses from being adjacent certain types of tiles or improvements and some wonders have terrain or adjacency requirements.

As I progress from the Medieval to the Renaissance era, technology finally allows my scouts to cross the oceans and I start my search for India in earnest. And finally I find Gandhi. He’s in a continent not too far away from mine but he’s not doing so well. He has a couple of cities, just a few military units, and he’s behind in technology. He must have been attacked by his neighbor, the Scythians.

As this point, the problem is that Gandhi basically can’t declare war right now. This is because of the new agenda system for the A.I. All leaders have a set primary agenda which fits their nation or the leader’s personality. Gandhi’s is “Peacekeeper; he does not declare wars which could brand him a “warmonger” in the game and he gets friendly with other civilizations who keep the peace.

I’ve also observed him not making a lot military units so this might be an effect of the agenda. While the new agenda system might have made it seem like we’ll be seeing less of Mahatma Nuke-andhi, allow us to break your bubble: there is also the secondary agenda which further modifies AI behavior.

Seeing the situation at hand, I decide to play somewhat passively and intervene if someone attacks him so that he can survive until nukes come into play. Here’s a video that runs down all the agendas for the leaders of the game:

Time further passes and I find myself moving from the Renaissance Age, to the Industrial Age, then to the Modern Age, and then to the Atomic Age. I’ve been in a few wars at this point, always the victor since I’m leading in technology. I’ve been trying to help Gandhi along. I’ve been giving him some money and I’ve been protecting him when someone declares war on him.

Yet he’s just entered the Industrial Age, way behind in tech. He has crossbowmen, I have machine gun squads. He has wooden frigates, I have steel battleships.

I enter the last age, which is the Information Age, and he’s still taking his sweet time in the Industrial Age. I decide to just wait until he finally gets to the Atomic Age but…I inadvertently trigger the victory condition for a Cultural Victory. Well, that ended anti-climactically.

From what I experienced in this playthrough, it seems that it may be more difficult to get Gandhi to nuke people compared to the previous Civilization games. If my guess is correct, his main agenda leaves him weak militarily. His pace in advancing in technology was also slow. The possibility of him using nukes is most definitely there though, since he has the Nuke Happy secondary agenda. Perhaps it is easier to trigger on higher difficulties since the AI would be more competent.

With Gandhi using nukes or without, Civilization VI is a great game. This game further refined the systems and concepts used in Civilization V, introduced good new mechanics, and gives you a great overall experience with the music and animations being top-notch.

Fans of the Civilization series and 4X (eXplore, eXpand, eXploit, and eXterminate) games in general will certainly like this game. It’s a worthy addition to the Civ family. Even casual gamers or people new to the genre will be able to appreciate this and see why there is a legion of gamers who’ve been saying to themselves, “Just one more turn,” for many years now.

And who knows, you might even get Gandhi to nuke you. – Rappler.com