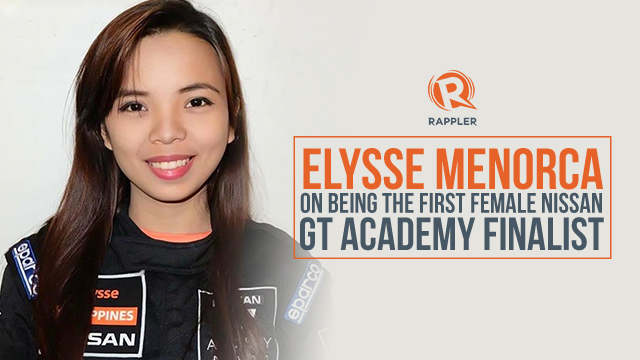 MANILA, Philippines – While it’s common knowledge by now that the realm of video games is not an all boy’s club anymore, it’s still not every day you that hear about a Filipina bringing her A-game in the competitive gaming scene. Meet 22-year-old Elysse Menorca, one of the 6 Filipino Nissan GT Academy finalists who were given the chance to be trained from gamers to professional racers. The finalists were chosen based on time trials conducted in the PlayStation racing game, Gran Turismo. Safe to say, they were some of the best Gran Turismo players in the Philippines.

In October, Elysse and the rest of the Filipino competitors then flew to the United Kingdom where the next leg of the GT Academy was held. This time, they had to outrace the best challengers from Thailand, Indonesia, North Africa, Mexico, and Australia using real Nissan cars. The prize to win was the coveted title of Nissan GT Academy Champion. The GT Academy Champion would be trained to become a professional racer for Nissan.

Though her run was cut short, Elysse says she was still thankful and happy for the experience. She shared with Rappler her challenges, pressures, and triumphs as the first and only female finalist of the Nissan GT Academy.

While her competency in the race track was not questioned, Elysse revealed that her physical strength surprised many. One of the challenges at the camp involved testing their fitness and strength. Being the only female finalist, she shared that her fellow racers assumed that she wouldn’t be able to finish the physical challenge because of her gender.

Despite the comment, Elysse said that she still made a lot of friends at the Race Camp, and that bonding with her new friends was one of the highlights of her experience.  “It’s really a good experience, we had so much fun. Of course it was challenging, but the best part is that we all had fun together as friends.”

For those who aspire to be Elysse, she shared that budding racers should try to learn the track, and get physically and mentally fit for the challenges to come.

Lastly, Elysse revealed with Rappler the greatest lesson from her experience: “What I learned from GT Academy is, if you do your best, you’ll have no regrets at all.” – Rappler.com