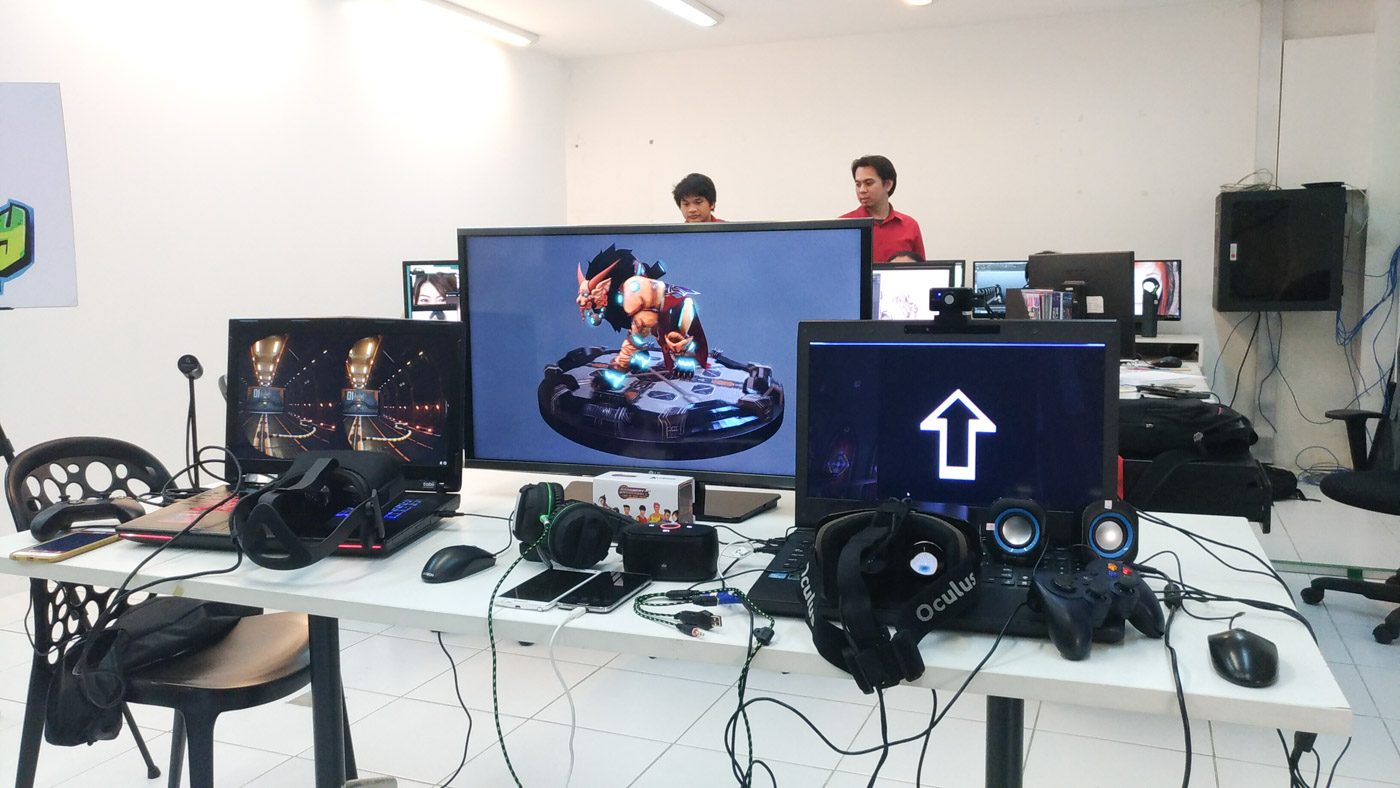 Facebook Twitter Copy URL
Copied
Synergy 88 is the Philippines' first Microsoft-certified development studio. We talk to one of its founders, Jackie Chua, about their achievement and what she thinks the industry needs to reel in more such projects

MANILA, Philippines – You might not be aware of it yet but there’s already a growing number of local development companies contributing to the creation of your favorite games.

One of them is Synergy88, the first and only Microsoft-certified studio in the Philippines, a certification that Microsoft gives to outsourced studios that meet their global standards. Synergy88 is responsible for crafting some of the key assets in the acclaimed Xbox One and Windows game Gears of War 4 (GOW 4).

The fact that a local studio is now being tapped to handle responsibilities for a triple-A game shows you that this industry is growing. It’s still fairly young and the industry has been more known for casuals, indies, and mobile games. The industry hasn’t yet produced a true triple-A title but having a studio that had a hand in such a big game is a step in the right direction.

To hear how the studio did it, we spoke to the studio’s managing director and co-founder Jackie Chua who shared the working dynamics in the company, her insights on the industry, and what it takes to thrive in the business of gaming. While Synergy88 found success in collaborating with international game developers, they first began as an animation company. Jackie Chua revealed that much of their inspiration for starting Synergy88 came from their love of Marvel and DC comics and games.

Her business partner and co-founder, Bernard Chong, owns an assortment of action figures, comics, and Magic: The Gathering cards displayed in the Synergy88’s lobby and all around it’s office. Jackie, on the other hand, plays some games with her son to keep abreast of the latest trends in the industry.

“The reason why we put up the studio is to create our own anime shows, own characters, and our own stories. But later on we said, ‘Okay, why don’t we also get work for other companies?’”

When the company started to get serious in animating in 2015, one of their first big collaborations was with the popular animation studio DreamWorks. Their studio worked on the second season of the animated show George of the Jungle. Their work was a success, and in 2016, it won Best 2D Animated Program in the Asian Television Awards.

Later on at the end of the interview, Jackie revealed that it was their need to reach higher standards that drove them to seek an international partner who has been in the animation industry for years. And it’s also what’s driven them to collaborate with many companies outside the Philippines. “Here, we’re open to having partners abroad, or foreign partners. We’re not closing ourselves to that kasi we want to reach the global market and for me that’s one way of achieving that goal. It’s having experts as partners in our business.”

The transition to gaming

Their transition to creating assets for games and creating their own intellectual properties (IP) as well, can be traced back to their family’s love for gaming. Jackie shared that she and her son are gamers at heart.

“That’s why we also thought of creating our own [game], sana parang Diablo pero it’s very big, so sige something casual muna.”

Diving into the gaming industry meant that they had to set-up a separate team to handle their projects.

“It’s an entirely different division, so we have to have a different team for the games. The discipline is different.”

Despite that, many animation companies now are also into developing games and mobile apps as well. “Nowadays, almost, I would say all shows, have a companion app for gaming to further extend the brand. So somehow in our business we get the same feedback, like if our clients in animation, they make shows, they also need an [accompanying] app.”

Synergy88 itself is doing the same thing. They’re working on their own game to accompany their upcoming anime, Barangay 143 – an original show that’s being co-produced by Japan’s TV Asahi and Singapore’s August Media Holdings.

Out in the market now is Vince and Kath, a mobile game created in collaboration with ABS-CBN.

The challenges in creating a team

Like in all industries, working on an ambitious project needs a highly capable team, and Jackie revealed that finding the talent to work on what they wanted was tough.

“The challenge that we encountered was finding the right talent, putting together a good team. Because what we were trying to achieve is international quality, eh. Global quality.”

Nonetheless, Jackie was able to form a core team for their projects both in gaming and in animation. Jackie did note that there is a huge demand for good local talent that the current talent pool is having trouble supplying.

Synergy 88 has been speaking with schools and the government to help address this. They said they have connected with schools in Metro Manila and the provinces such as Naga and Davao that offer game development and animation programs. In a separate correspondence, Jackie and her business partners shared what they think is the key to creating a feasible environment for the future:

“We’ve communicated with schools offering animation and game development courses. We reviewed their curriculum and gave recommendations on how they can improve the standards of what they teach and for their graduates to be industry ready. The skill to become an adept animator or artist is not something you learn for a short period. The latent talent is honed over the years of constant practice and exposure to many styles and techniques.”

“Right now we’re in talks with several schools, we’re telling them what’s the problem. Because art is something you develop for years. It’s not something that you learn in a few months. It’s art kasi eh. Parang sports,” Jackie said in the interview.

Inside the company’s walls, Synergy88 provides further in-house training to its employees. They are also sent to various conferences and workshops here and abroad, giving them as much exposure and experience as possible.

With regards to the government, she said that they’re telling them that this industry has to be supported because it has potential, and the growth [of the market] is at least 10 to 12% a year. It would create more employment, she finished. On international clients and meeting Microsoft

Nonetheless, Jackie and her international clients believe in the talent of the Filipinos. According to her, our immersion in both western and eastern culture, and our knack for the English language has made it easier for companies to communicate and collaborate with us.

“Somehow they feel that It’s very innate for the Filipinos when it comes to art. They also love the communication – it’s easy. The proficiency in English is a big plus. It’s easy for us to grasp the art-style that they like.”

One such international client who’s happy with the talent of the Filipinos is Microsoft, with whom Synergy88 currently enjoys a good working relationship with.

Synergy met Microsoft in 2014. That year, the Department of Trade and Industry’s Board of Investments (DTI-BOI) sponsored a booth at the External Development Summit (XDS) in Canada. Synergy was a part of the PH delegation. The trip was an initiative led in part by BOI’s Angelica Cayas and Lanie Dormiendo. And thanks to it, the studio was able to meet and network with international companies including Microsoft subsidiary The Coalition, which at the time was working on the aforementioned Gears of War 4.

“Years ago, the Board of Investments sponsored a booth in a conference called XDS, External Development Summit. So it’s all about outsourcing work. So we joined, we were part of the delegation, we joined some government officials who went there. So that’s how we met the head of production of Gears of War who also happens to be Filipino,” Jackie said.

To get the Microsoft-certified studio title, you need to do more than just putting yourself out there and meeting the right people. You need to be equipped and properly trained to work with them.

When The Coalition visited the Philippines in 2014, it toured and reviewed 6 game development companies that offered triple-A asset services. Synergy88 was among those candidates, and eventually won out. One bonus for becoming the sole outsource vendor of The Coalition in the Philippines? Two of Synergy’s leads got to go to Canada to train directly under Microsoft.

Jackie also states the importance of learning proactively because of the nature of the game development industry: “Our business is very creative but it is also technology-based. I would say that [game development studios] have to keep on researching, keep on studying, new software and new techniques. Because now everything is digital. So everything that’s new, you have to learn it.”

Despite the perceived pressure of working with a company as big as Microsoft, Jackie revealed that the team handled it well and was happy for the opportunity. She even joked that they’re used to it.

“Hindi naman sila stressed, parang masaya pa nga sila. Maybe because that’s one of the things that if you really do what you love, you don’t feel like it’s work. And I guess masarap din yung you get to have this sense of accomplishment. You get to see your work when it’s done, when it’s released. The game is released and your name is at the credits, masarap ‘yung feeling.”

She added, “When we know that we’ve become part of something we love. It’s an unexplained bliss.”

The Gears of War 4 project showcased the potential of Filipinos to be a player in the global gaming scene. Synergy said that they enjoy the international recognition they receive from having worked on the title, and they catch the attention of industry professionals during international events. – Rappler.com