Facebook Twitter Copy URL
Copied
The afternoon started with 6 Japanese players, 5 Korean players, 4 Filipino players, and one Thai player. One by one, the cast was whittled down until only two players remained.

The set-up of Rev Major’s venue shifted to full spectator mode on Day 2 of the event. All eyes were on the stage as the top 16 players from Korea, Japan, the Philippines and Thailand slugged it out for glory and gold.

As expected, the Filipino crowd was loud and beyond excited for the chance to witness gods and rising champions fight and perform for the grand prize and, more importantly, points to move on towards the Tekken World Tournament.

The afternoon started with 6 Japanese players, 5 Korean players, 4 Filipino players, and one Thai player. And one by one, the cast was whittled down until only two Korean players remained: JDCR, who won at the Rage Art Tekken 7 launch event last month, and Knee, another Tekken legend and crowd favorite. Before the finals, the two already met at the Winners’ bracket semifinal, which yielded one of the tensest matches in the event. Round after round of Time Ups and close calls ended with JDCR besting Knee.

Few words can describe how the crowd cheered and reacted wildly to two of their favorite players battling it out on the Philippine stage.

After many Time Ups and close matches, the battle of the gods ends with JDCR on top. #REVMajorPH | @rapplerdotcom pic.twitter.com/P7KxCpD5lh

That cheering only grew louder as it got closer to the finals, where Knee was swept away by JDCR after a grueling uphill battle to meet him at the end.

The battle between the two gaming gods was not the only highlight of the event however. The matches between Saint and Kkokkoma, and Take and Tsubomi, were also met with fanfare and intense roaring from the crowd.

While eliminated early, Doujin gave a stellar performance against Korea’s Dimeback, bringing everyone at the edge of their seat. In an interview, after the finals Doujin admitted that he had the advantage and the momentum but somehow slipped after dropping his guard.

The fights were made even more entertaining and exciting with the help of commentators Spooky, Tasty_Steve, Markman, and Jiyuna. 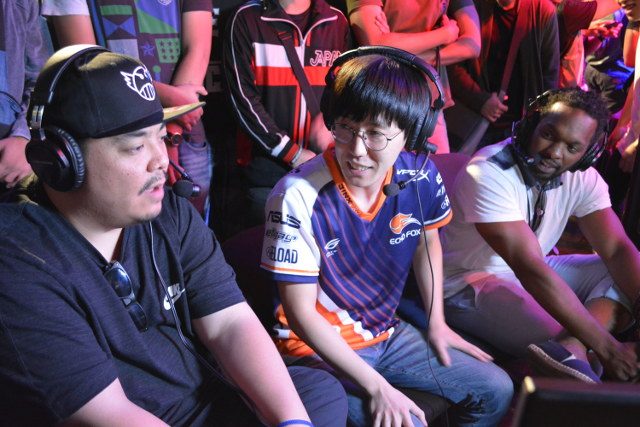 After everything was said and done, most of those who were new to the Filipino fighting game scene had to agree – the community is loud, warm, and passionate for the game and for its players, regardless of their region or nationality. – Rappler.com