A gamer’s Christmas wishlist this 2017 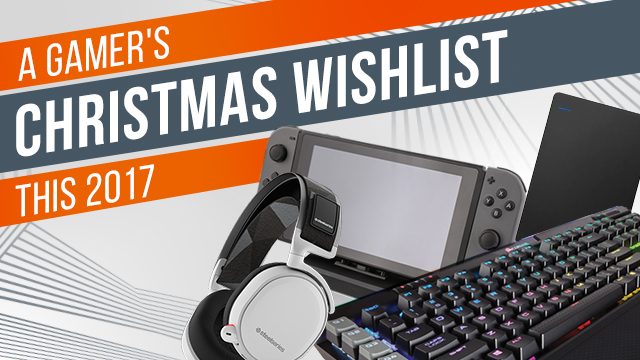 Facebook Twitter Copy URL
Copied
Here’s a rundown of gaming gear released this year that would definitely make for a merrier Christmas!

It’s that time of the year again. With Christmas just being a little more than a month away, most of us are probably browsing online or looking around stores for gears to purchase with our 13th month pay, or, if you’re still a student, to ask from your parents for the holidays. I myself have had a little mental wishlist for every sweet release this year.

And now with most of 2017 out of the way, here’s a rundown of gaming gear released this year that would definitely make for a merrier Christmas and a more exciting 2018. Finally, Nintendo throws their hat into the ring. Unlike Sony and Microsoft’s take on this generation of consoles, Nintendo focused on convenience over power. The Nintendo Switch, if you didn’t know already, is a handy little portable console which allows you to play either on your tv screen or on the console’s screen itself. The wireless controllers are docked into either side of the console which you can take out and even share with a second player for some multiplayer fun.

For gamers who are always on the go, this is a dream come true.

And while arguably, the Switch could do with more titles, some of the games already available for the console are already pretty solid. The Legend of Zelda: Breath of the Wild, Super Mario Odyssey, Stardew Valley, The Binding of Isaac, Shovel Knight, and of course who could forget, The Elder Scrolls V: Skyrim.

The console will set you back around P22,000 – P25,000 depending on your bundle and your choice of retailer. If you’re getting a Switch, or already have a Switch then the Nyko Portable Docking Kit should be part of your list.

The dock, which was first shown off at E3 this year, is praised for its portability and flexibility. It’s smaller and cheaper than Nintendo’s dock and you can play on tabletop mode while charging your Switch. There are also three USB ports for your other accessories and needs.

You’ll have to do a little digging around to find this handy dock online, but you can also purchase the item directly from Nyko at $49.99. If you’re looking to upgrade your audio set up this Christmas, then you’ll want to get the Razer Thresher Ultimate. This beast of a headset boasts top quality audio, an easy and effective surround sound system, a surprisingly comfortable fit and feel, and a pretty long battery life.

Now when we say “beast of a headset” we actually mean it. This headset is 7.7 x 8.4 x 4.1 inches, and it comes with its own dock. Keep in mind though that this wireless headset doesn’t come with a 3.5mm jock, and because of its pretty insane size, you may want to keep this at home. It has a 3.5mm jack and you can fold its cups so you can carry it around during your commute or walks out the house. The Arctis 7 also boasts a decent and crisp microphone which is good for your multiplayer sessions. The only issue I have about this is that the surround sound is only applicable on PC. “Finally!” I exclaimed, after learning that the PS4 would allow players to expand their memory space via external hard drives. As a hoarder of its games and a frequent user of the PS4’s gameplay capture feature, an easy memory upgrade is a top necessity.

Now while upgrading your memory space via internal hardware has been a possibility for awhile now, there’s still a slight level of risk for those who are not used to tinkering with hardware. And I’ve always preferred an external hard drive for portability and convenience.

While there are many possible HDD’s to choose from, the Seagate 2TB Game Drive HDD is an excellent choice for its price, its ease of use, its compatibility with the PS4 (it won’t void your warranty should anything happen), and its size. If I had all the money in the world then this sleek, gorgeous mechanical keyboard from Corsair would be one of the first things I would purchase for my rig. It’s loaded with all the features a gamer could ask for and it maintains its speedy reputation. Perfect for FPS fans who need faster reaction times, especially with the rise of games like Player Unknown: BattleGrounds.

One of my favorite features has to be that you can save three different keyboard profiles locally, making it easier for me to switch from one setup to another. Or if you share your desktop with others, you can switch your preferences easily. Gone are the days when wireless gaming mice were considered slower than their wired counterparts. With technology advancing, a wireless can perform just as good as a wired one. And for that, a pretty great upgrade you might want to invest on is the Logitech G903 Wireless Gaming Mouse.

The mouse is perfect for those who prefer ambidextrous setups. Its buttons are not as overwhelming as many feature-rich mice out there, and it feels quite comfortable. The best part is that the buttons itself are customizable, and you can snap a few of them in and out when you want to.

Of course, 2017 isn’t done yet and there were also some announcements of impressive gaming gear that I’d like to get my hands on once it launches in the Philippines. There’s still the just announced Razer Phone, and the Xbox One X which is touted to be the most powerful console yet.

What items do you have on your Christmas wishlist? – Rappler.com