10 streaming services in the PH: Which one is right for you? 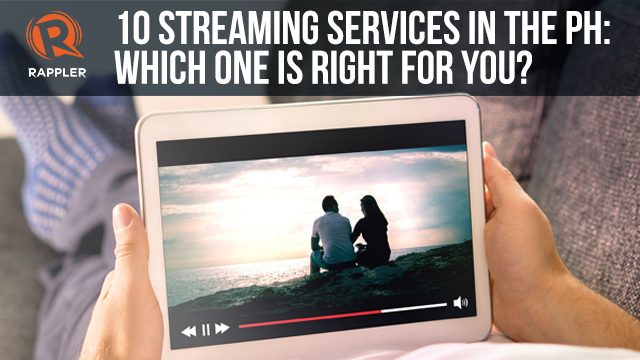 Facebook Twitter Copy URL
Copied
Netflix’s immense popularity has made it synonymous with streaming but it’s not the only player in the game.

MANILA, Philippines – The influx of streaming and video on-demand services becoming available locally in the last year or so has provided Filipinos options to choose which appeal to them the most.

Before planning your binge-watch sessions, figure out and decide which service works and best fits your interests. Why subscribe: The service continues to provide new and exclusive original content
for their subscribers to binge on like Stranger Things, Narcos, House of Cards, and
many others. And most of them now support UHD (4K), HDR, and Dolby Atmos, great forthose with a high-end home entertainment system.

Subscribers also have the chance to personalize their viewing experiences by creating separate profiles for each person using the service, allowing Netflix to make the appropriate movie/show recommendations. Some plans allow accounts to be shared with friends or family for simultaneous viewing. Why subscribe: Amazon Prime Video has its own selection of award-winning original
content like Mozart in the Jungle, American Gods, and Transparent. It even has
licensed content from its direct competitors like HBO’s Game of Thrones and Hulu’s The Handmaid’s Tale. In addition, it allows up to 3 devices to be streaming simultaneously and a watch offline feature.

Gamers will also love the Twitch Prime membership that comes free with their subscription, which grant them access to exclusive content and streams on Twitch.

The downsides: The service has a la carte content that do not come with the
subscription and require extra pay. Similar to Netflix, some of the licensed content are
constantly changing. Price: Free, P10/day, P40/week or P99/month
Why subscribe: iWantTV puts all content produced and aired by ABS-CBN all in one
place. The service lets its subscribers access the network’s sizeable archive of original shows, movies, news features, and more. Subscribers can also livestream all channels under the network from their mobile devices.

Best of all, catching up on currently airing shows is also free. All this makes the service a must-have for any fan of the network and their content.

The downside: The service does not allow simultaneous streaming between multiple
devices. Why subscribe: HOOQ has a large selection of local and international shows and
films. The service will soon offer locally produced original content like the long
delayed On The Job sequel.

It also allows up to 2 devices to be streaming simultaneously and content can be
downloaded for offline viewing.

The downsides: The lack of UHD (4K) support for content make this more appropriate for those who enjoy viewing on their phones or tablets. Rental feature also locks some content behind a paywall. Why subscribe: iFlix has a commendable library of local and international shows and
films. Critically-acclaimed shows like Mr.Robot and Fargo are exclusively streaming
here locally. The service also has a decent amount of foreign language shows. There is a download feature for offline viewing and up to 2 devices can stream simultaneously.

This is bang for your buck value considering all the content included for the budget
friendly price.

The downside: Similar to HOOQ, there is no UHD (4K) support for their content. Why subscribe: Any fan of independent Philippine cinema will certainly love what
Cinetropa is offering. The service features breakout hits and festival favorites like
Heneral Luna and Patintero. Those who missed these films’ theatrical runs could use
this service to finally see them.

The downside: As of writing, the service is still trying to expand its library of films and
content is still mostly pay-per- view. Why subscribe: Fox+ has a bit of everything, from its selection of movies and shows to live sporting events. It’s the local home of shows like The Walking Dead and Homeland. Subscribers can also livestream their channels including all 3 Fox Sports. Up to two devices can watch at the same time and it supports download for offline viewing. Why subscribe: HBO Go has everything on its cable channel counterpart including all original shows, films, sporting events, talk shows, and documentaries. This is definitely the must-have service for those wanting to catch up on shows like Game of Thrones, Silicon Valley, Westworld, Veep, and many others. The service also lets its subscribers livestream all their channels. Up to 2 devices can use the service simultaneously.

The downside: Similar to Fox+, when compared to others on this list, the selection of
content may seem limited. Why subscribe: Viu has the largest selection of Korean and Japanese teledramas on
this list. Episodes are even added just hours after its telecast. The service is free for
those who don’t mind watching in SD (480p) and can bare all the video ads.

The downside: The premium subscription does not entirely remove ads from the
viewing experience. Why subscribe: Anime fans can’t go wrong with this service. It has a decent number of Japanese animated and live-action shows including simulcast streaming. Premium
subscribers can even access digital versions of manga (Japanese comics).

The downside: Despite having a search bar, the interface is cluttered making it hard to
navigate and find specific content.