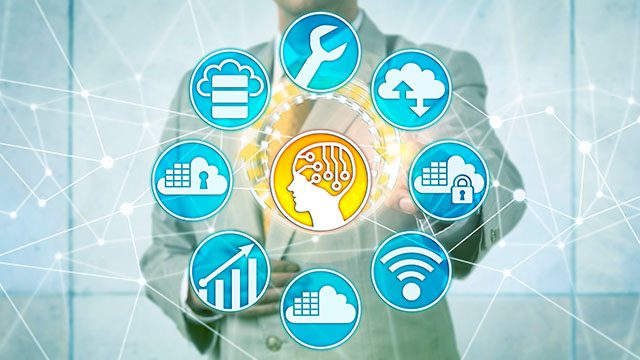 Facebook Twitter Copy URL
Copied
According to a report by the World Economic Forum, here are primary considerations when it comes to the future of work in the age of automation

MANILA, Philippines – The nature of work is changing with the advent of technologies designed to automate or streamline certain processes.

According to the 2018 Future Of Jobs Report, released earlier this month by the World Economic Forum, the change requires workers not only accept the evolving job landscape, but to also adjust to this new world accordingly.

Below are some of the main takeaways you may want to consider when it comes to the future of work.

The severity of technological disruption in one’s own job market will depend largely on what type of work you do, but you should expect the adoption of robots and other automating technologies to replace people as a necessary change towards the creation of other types of jobs moving forward.

For instance, stationary robots may replace people working on assembly lines in the automotive and aerospace industries while drones and other types of robotic tech might make certain jobs in the oil and gas sector and the financial services sector less viable.

That said, the WEF report also notes that by 2022, 75 million current job roles may be displaced as a result of the technological changes. The report added, however, that 133 million new jobs may be made at the same time in other fields.

Specifically, new job roles may be made for people based on the new technologies being developed – such as data analysts and software and app developers. Other jobs that may get a boost include human resources, customer service, training and development, and sales and marketing work, among others.

The division of labor will change

How work is divided in the coming years will change.

Right now, 71% of jobs across the industries covered in the report are done by humans, with 29% done through robots or algorithms.

To a lesser extent, things human do as part of their work day – from communication, coordination, and management tasks – may also get shifted.

A chance for continuous learning

Because of the above-mentioned changes, the type of skills required to do work tasks in the future will also change.

The WEF report said “Skills Stability,” or the core skills required to perform a job that will stay the same, will be about 58%. In other words, 42% of the required workplace skills leading up to 2022 will change.

Among the growing skills are the ability to think analytically or critically, then innovate, emotional intelligence, and technology design and programming.

Seen as declining skills were manual dexterity, endurance, and precision; the management of financial and material resources and personnel; and, strangely, reading, writing, math, and active listening.

Because of these changes, current workers will need to learn new skills to adjust to the changes, and the WEF said that, on average, employees will need 101 days of retraining or upskilling in the period up to 2022.

Companies may also – depending on industry and geography – use external contractors, temporary staff, and freelancers to compensate for skills gaps in the workforce. Being able to get ahead of this curve and adjust the workforce adequately will eventually pay off.

The Philippines was one of 20 countries and regions discussed in WEF report.

Based on the share of companies surveyed, the following technologies appear most likely to be adopted by companies working in the Philippines. These companies indicated that, by 2022, their company was likely or very likely to have adopted the below technologies as part of their growth strategy: The report also determined the expected reskilling needs over the 2018 to 2022 period across the country, diagramming it according to how long, on average, workers may be needed to retrain. 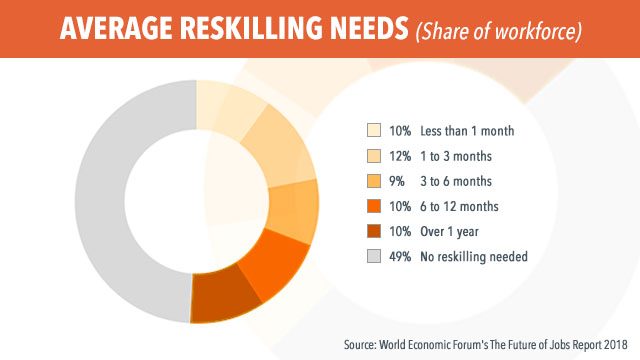 According to the report, 49% of the Philippine workforce may not actually need reskilling moving into 2022. Based on likelihood, other responses included outsourcing some functions to external contractors (65%), hiring new temporary staff (64%) or freelancers (61%), and going through strategic redundancies who lack the skills to use the new technologies (54%).