‘The Last of Us 2’ spoiler-free review Disclaimer: Sony provided a review copy of the game. The game comes out on June 19.

The Last of Us 2 hasn’t had the easiest path to its eventual release. It suffered a major story leak, and was delayed because of logistical problems caused by the pandemic. But those have not been its toughest adversary. This is: being a zombie game in 2020.

Or at the very least, that’s how I felt starting the game. I’m a fan of the original game, and it was the first title that I played and finished on the PS4. That was in 2014. Even then, zombies were already, well, rotting. In 2020, we’ve just about had enough. Well, almost.

The Last of Us 2 pole-vaults over that issue of mundanity. The zombies here (canonically called the infected, taken over by a really bad strain of fungi) and its post-apocalyptic world are merely a backdrop to the game’s real star: a damn electric revenge story rivaling the likes of Kill Bill, built on a solid foundation of well-developed characters and their relationships. Here, the ties that bind are shown to be the ties that will drive one mad.

It’s almost as if you’re watching a TV series at times, with the game generously giving both heroes and villains and the in-between grays the necessary screen time for the player to connect with. It certainly doesn’t hurt that this is some of the best digital acting, face and skin modeling, and voice acting found in a video game. It’s jaw-dropping to see the game deftly balance itself as both show and interactive entertainment. Ellie is the heroine of the game, now 5 years older since the first game, and can now take care of herself just fine. It’s her struggle you will see, and you will see it up close and personal – her face in full view as she experiences terror, anger, rage, desperation, glee, and melancholy. You see the pain in her face – in various degrees – when she gets hit, and that communicates something to the player: that this is a struggle of great enormity, and that this quest for blood will certainly have its price. The violence is a necessary element to the game’s narrative, almost like an invisible character that pushes the story further.

But it’s not just Ellie that feels the pain; the human enemies do as well. The game makes it a point to actually show the fear and the struggle of the human enemies as you take them down, to remind the player that these are humans too. They actually have names. When an enemy finds a slain comrade, you hear them shout their name out. You’re not just killing some zombie.

The gameplay itself is very tough. Even at the easiest level, you’ll need stealth and a good aim to survive. I feel though that this game is meant to be played on the hardest setting, with scant resources and tougher enemies, as this would be the most realistic, and to hammer the point that you have to be crafty and stealthy to stand a chance against squads of infected and goons. On the easiest level, you can basically feel like an action hero taking down a base.

The melee is also very satisfying. The game frames it almost in a cinematic way when you are hitting an enemy or the other way around. It’s in-your-face, and you can really feel the punches to the gut, the blades going into the flesh, or a bat hitting a zombie’s skull. There are human enemies too that will put up a harder fight than most, and these are standout moments during the gameplay. The environment plays a factor in the melee too. If they’re close against a wall or a table or another object, the melee animation will change to include those environmental elements.

In between the fights and the occasional action set-pieces, there are quiet moments, too, that focus more on character relationships. The game also jumps in and out of tense, suffocating indoor locations and wide open spaces – a nice contrast, and a signature change-of-pace for the game. 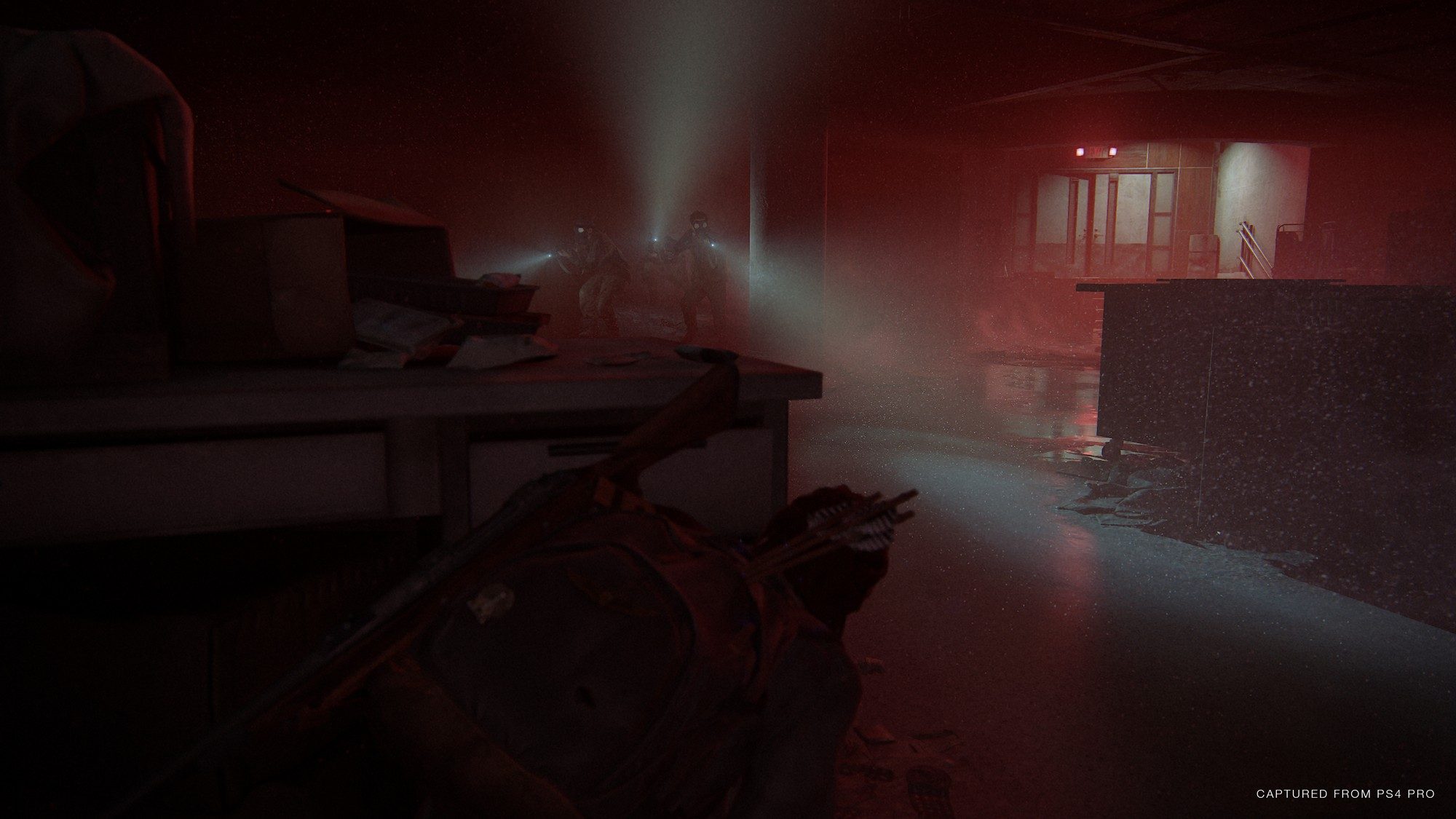 The meat of the gameplay lies in what the game calls encounters. You try to go from point A to point B in one area, while trying to figure out enemies’ walking patterns, so you could take them sneakily without alerting others or avoid them altogether. It gets very tense, but it’s also satisfying to figure out how to clear areas the most efficient way possible. There’s some trial and error involved here, but thankfully, the game loads quickly after death. I think it’s great too that the game doesn’t linger on the death scenes, because those look grisly.

(Or you can just start shooting as well if you’re on the easiest difficulty, and just want to admire all the beautiful scenery, the rooms and interiors that are very distinct from one another, and the story parts.)

The game leans ever harder on the beauty of nature taking over human cities again. Ferns, vines, and a noticeable variety of flora overrun buildings, while rapids and rivers burst through city streets anew. It’s this visual character that makes it stand out from other zombie-ravaged landscapes such as those we’ve already seen from The Walking Dead or I Am Legend. It’s the kind of digital scenery that makes me want to get a 4K-capable console and a 4K TV. And like Final Fantasy VII Remake, I found myself taking the time to take lots of screenshots as well.

The music ranges from tender and evocative to brooding, ominous, and heavy, but one that is made distinct by the presence of a guitar – which, itself, is a part of the story. There are some truly creepy places as well that you don’t want to go into, don’t want to stay in, and don’t want to pass through. By the way, whenever you hear a character tell you, “Let’s cut through here” as if that’s a shortcut, that usually spells trouble. This will happen a lot because people in this universe fastidiously lock and bar their doors. Vents and cracks in the wall are your best friends. “Of course, it’s blocked. It would’ve been too easy,” a character says about an entrance late in the game, almost self-referentially.

All that sneaking around, the cinematic flair, and the close-quarters combat and a few other elements as well sometimes feel like a nod to Metal Gear Solid.

From beginning to end there’s also surprisingly a good variety of places, moods, and textures to see here, more so than the first game.

As the game is very ambitious in trying to reach new heights of realism in a video game, the little flaws will tend to stick out. Sometimes, the enemy AI misses their dead comrade right in front of them, and is quite lenient when detecting a friendly non-playable character (NPC). Your friendly NPC can sometimes scamper around carelessly, without them ever noticing. It sticks out. Sometimes, the game falls on traditional game mechanics such as pushing an object to climb on, finding fuel, and turning on the power.

I also encountered at least one glitch where a story sequence didn’t activate, forcing me to go around in circles before I was able to backtrack and activate it. There will be patches to fix these tiny bugs though.

TLOU2 is a long game for its genre. What games of this type – the cinematic action game – could maybe improve on in the future is to serve chunks of the game into distinct episodes with its own rise and fall in action. TLOU2 already labels chapters in the game, but sometimes it still feels like a long movie rather than a more easily digestible 8-episode series.

Those things aside, The Last of Us 2 is a game that asks you to play at a deliberate pace – to appreciate the visuals, digest the story, and to actually survive the encounters. It sets the bar for video games as a storytelling medium – in both technical execution and maturity of content – just like the original did back when we were transitioning from the PS3 to the PS4. It’s been quite the story arc for Naughty Dog itself, kicking off the PS4 era with the remastered original, and capping it off with another masterpiece. – Rappler.com