Most people are able to find ways to communicate that best suit their needs. For some, writing is better than talking, while for others, talking is still the easiest way to get a point across.

There are cases when talking or writing doesn’t come easy. That’s why augmented communications systems have been developed to bridge the gap.

One app, called Tom Taps, hopes to allow those with autism to better voice their needs through an interface that’s growing more commonplace every day: the iPad.

It all starts with Tom

Tom Taps is named after a real person – the son of Seer Technologies’ owner, Joseph Ilagan.

Abegail Alcantara, project leader for Tom Taps, told me it was a desire to help his son that catalyzed everything. Joseph’s son Tom was diagnosed with autism at the age of two, and with the backing of both Seer Technologies and startup incubator Spring.PH, Abegail and a team comprised of developers, graphic artists, and an educator, began work on Tom Taps Speak, the first module that would fall under the Tom Taps line. Abegail said the team researched the apps currently available, such as communication and social skills applications. They also observed Tom during a speech therapy session and visited Special Education centers, talking to teachers and mothers about how to best design the app.

The premise is simple though: make something that works, and set it free to help kids. “Instead of the kids bringing a bulk of cards, toys, therapy materials and books,” Abegail said, “we would have modules for communication, learning, therapy, books, and even games in one device.”

The idea was to provide a better experience for the child, for the parents, and the teachers involved so that more effective learning and teaching could take place.

Tom Taps has its interface set up for easy use in sharing ideas rather than sentences.

Words are placed in folders to denote the kind of word you want to tap. For instance, you have a “time” folder to help you tell what time you want something to happen, and a “feelings” folder to discuss how something makes you feel.

The folders are available on a scrolling bar on the left side of the screen, while the right side shows the words. When a particular button is tapped, the word is said by the iPad and placed on the blank space at the top of the app.

To articulate a complete idea, the user taps the speech bubble on the upper right side. Users can also tap the eraser to reset the system or the red X to delete one word tapped.

Combining words from various folders can let a user show happiness at seeing someone, such as in the example below. 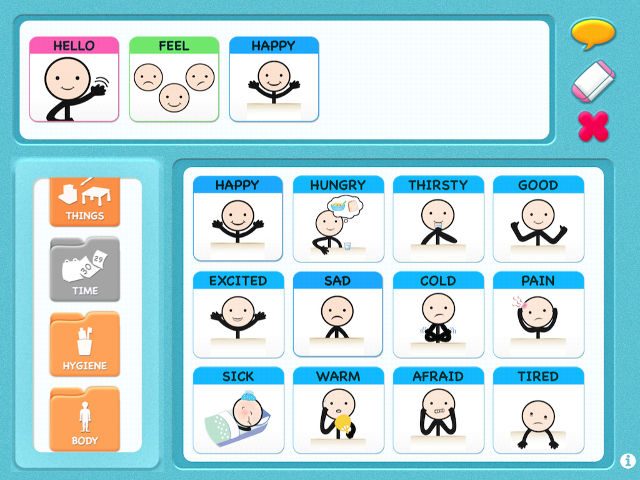 The app’s vocabulary is extensive, allowing users to also explore important needs, such as when the user feels pain. In the example below, I used 3 buttons to denote a shoulder being bruised and painful. The overall goal of Tom Taps is to empower its users, along with families and educators surrounding the user. Released in February, Tom Taps Speak is set to be the first of a group of apps that providea a comprehensive system that allows autistic kids to interact with others in a mode they may feel more comfortable with.

Abegail said the next of Tom Taps Speak is focusing on adding features that allow for greater customizability based on user feedback.

The long-term plan for Tom Taps is to gather a community of like-minded people – whether they’re parents, educators, or medical practitioners – and allow them to share their own resources to better enhance Tom Taps.