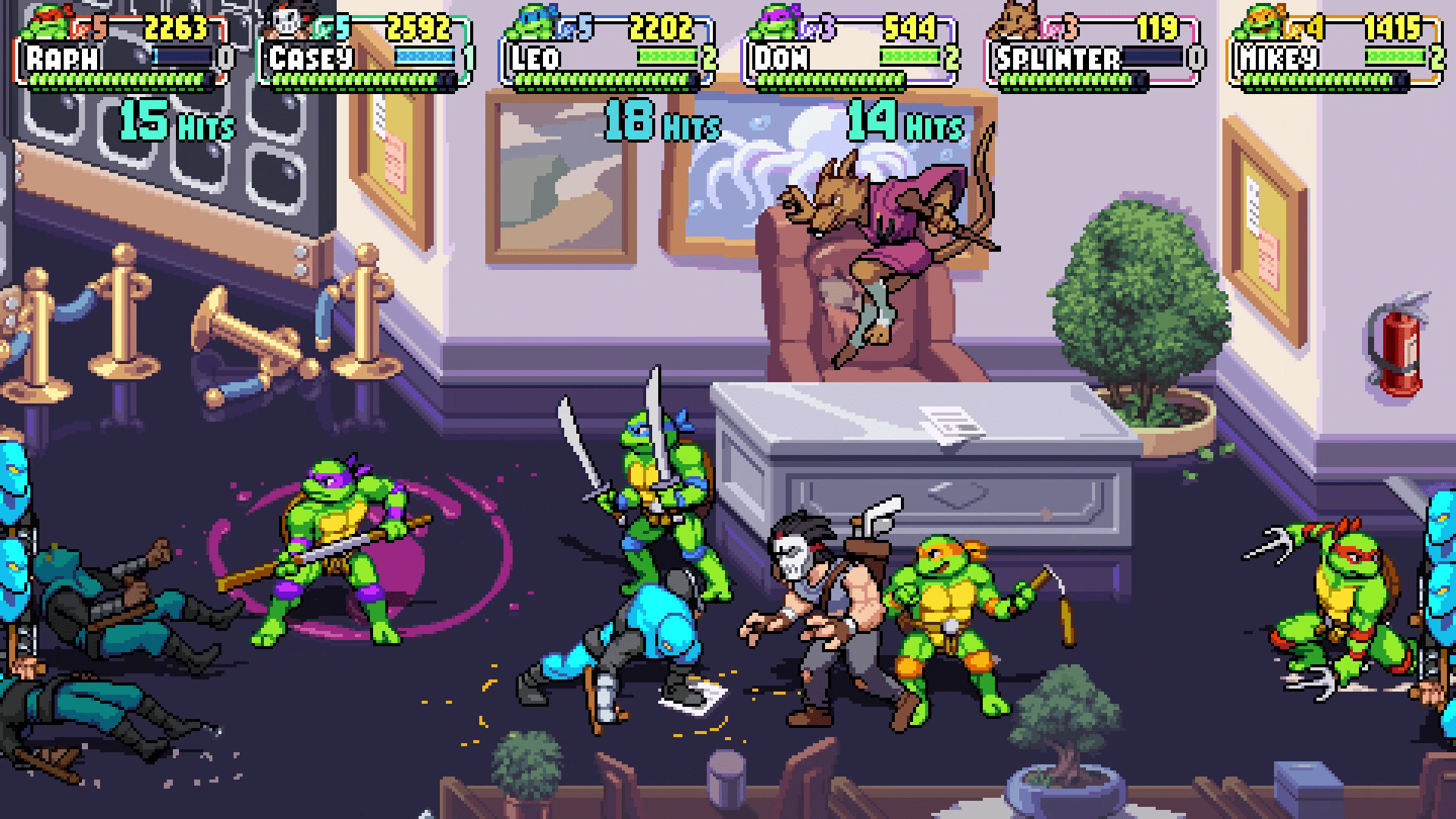 SHREDDER'S REVENGE. Lifebars, cartoon characters and waves of baddies u2013 anyone who experienced the arcades in the '90s will feel right at home

Images from Tribute Games and Dotemu

Facebook Twitter Copy URL
Copied
Do you miss the arcade beat-em-ups like 'X-Men' and 'The Simpsons' from the '90s? The great 'Shredder's Revenge' will let you relive that era

The side-scrolling brawler genre is all but dead and the few indie releases each year are there only to satisfy the ever-shrinking niche of hardcore fans – at least that’s what I thought before I played Teenage Mutant Ninja Turtles: Shredder’s Revenge.

Having been born in the mid-90s, I have fond memories of visiting local arcades as a child to play some of the quintessential games of the once-popular genre on aging machines that were at the tailend of their lifespans. Some of my favorites included Konami classics like The Simpsons, X-Men, and Teenage Mutant Ninja Turtles: Turtles in Time. These old-school brawlers would seemingly fade into the background in the turn of the century, a time when the gaming industry was banking heavily on 3D graphics and home consoles. Admittedly, I didn’t mind that there was this paradigm shift occurring back then, but I did miss the chance to play my favorites again with a better understanding of their charm.

So my excitement was almost through the roof when I heard they were making Shredder’s Revenge, and I’m very glad that it didn’t disappoint.

The game oozes nostalgia by the bucketload but never relies too much on it to appeal to modern and old-school gamers alike. That’s what I love most about it – the fine balance between new and retro – which is what I believe can push this niche genre back to some form of relevance. Sure, modern brawlers likely won’t reach the heights their ancestors did decades ago, but there’s still life here that’s worth supporting.

What got me into brawlers in the first place was the sheer accessibility of the gameplay, which mostly revolves around beating waves upon waves of enemies senseless. They’re simplistic by design. And Shredder’s Revenge is no exception.

You can pull off flashy moves and combos with any of the game’s seven playable characters by mashing only a couple of buttons. But it doesn’t mean the combat doesn’t have depth – it actually does, mind you – but it never forces you to engage with these mechanics if all you’re after is some mindless button-mashing. This is dumb fun at its finest. Sometimes, that’s all we want when we play games – an escape to a reality where our punches and kicks can do all the talking.

The combat’s accessibility also lends itself to this being enjoyed with some friends or family. These sorts of games are obviously a lot more fun when played with others. Shredder’s Revenge lets you play through the different modes with up to four players via couch co-op and up to six online, which as you might expect, dramatically ups the fun factor and the on-screen chaos.

Here’s a tip: As of writing, the game is available on Microsoft’s PC Game Pass, which is currently the most affordable way you can play it with your buddies on the same system.

For gamers such as myself, who may have some faint memories of playing Turtles in Time, mechanically, Shredder’s Revenge feels somewhat familiar yet fresh at the same time. Developer Tribute Games have managed to make the movement and the combat faster and more fluid while maintaining how impactful and satisfying each punch and kick feels. I’d say that’s a tough task. Faithfully re-capturing the essence of a beloved classic on modern systems is already quite a feat on its own, but to build upon it in a way that feels natural is nothing short of an achievement.

Outside of the gameplay, the retro aesthetic is also pixel-perfect. Everything from the sprites of the Turtles themselves to the tiniest details in the levels are so beautifully drawn and colored in the 16-bit art style that’s evocative of the era of games it’s paying tribute to. Even the animations look like they were lifted straight from the popular Saturday morning cartoon. It’s unbridled “fan service” from start to finish – and I know that term gets thrown around a lot these days, but here it simply works.

Perhaps my only complaint is that the whole game is pretty short, with the main campaign only lasting between two to three hours. This is par for the course for an old-school brawler, but I understand why you might expect more, given the size and scope of most of the releases in the market today. Then again, this is a game that begs to be played multiple times, with different characters to try out, secrets to uncover, and alternate modes to beat.

I’ve never been as optimistic about the future of old-school brawlers than I have with Shredder’s Revenge. I do think this is the game that’ll push average gamers to get into the genre. It has reportedly sold more than a million copies during launch week, which is, of course, a good sign. My hope is that it ushers in a new era of modern side-scrolling brawlers to join the likes of Streets of Rage 4, Scott Pilgrim vs. the World: The Game, River City Girls, among others. You can bet I’ve got my fingers crossed that the old Konami X-Men arcade game gets this same treatment soon. – Rappler.com