Facebook Twitter Copy URL
Copied
The epic RPG's combination of gameplay, world, and even appreciable characters has done a great job in compelling gamers to play

Initially, I planned to rush through the story of Final Fantasy XV (FFXV) to write a full review about this game. But on the first day of the release, after playing through the first few hours, FF XV achieved something not many open world games were able to do: compel the player to slow down and enjoy the ride.

Now I reckon that someone can finish the story within 24 hours if they really wanted to. And as someone who is used to playing closed and linear games and finishing open-world games as fast as I could, choosing only to participate in a few side missions, I expected that it wouldn’t take long for me to reach the end. But the contrasting and sometimes confusing elements of FF XV has forced me to look at the game from a different perspective. In my opinion, there is only one way to fully enjoy and immerse yourself in this game, and that is to slow down and go with the flow.

A decent set-up to a long journey

The first gameplay sequence starts out literally slowly, giving you an idea of what matters the most in the game. In the scene, Prince Noctis and his friends/bodyguards are struggling to push his broken down luxury car, the Regalia.

While they manually move the car, the four engage in friendly banter, giving you an idea of their personalities and their dynamic. There’s Ignis, the intelligent guide, Gladiolus, the strongest of the team, Prompto, the chatty marksman, and finally Noctis, the quiet Prince who acts more like your average Joe. The camera then pans up and out to show you the long road ahead of them, and in the background you hear no less than Florence Welch from English indie rock band Florence and the Machine crooning “Stand By Me.” 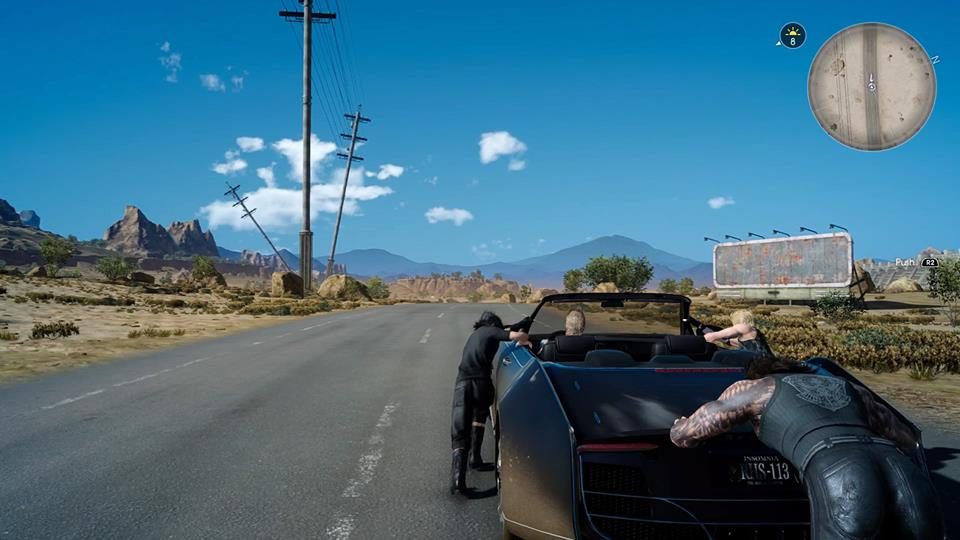 It’s comical but insightful and tells you a lot of what is really the core of FF XV’s story and gameplay: friendship and reality.

The game’s world itself has a unique way of helping tell the story of Noctis and his friends. In the first half of your long and arduous journey, the world of the game is wide open and you have all the time to take as many side quests as you can and to go on as many trips as you want. The second half gradually closes the world, and though you are allowed to return to the open world and continue grinding by tapping into the past, the opportunities to do so appear less the more you push the story forward.

For now let’s talk about the first half of the game, where the bulk of FFXV’s content can be accessed. During the first half, you can take on hunting quests to collect bounty. You can help Cindy upgrade your car by retrieving rare items. You can even brave dungeons if you feel strong and brave enough to do so.

However, it’s in this half of the game that can frustrate the straightforward gamer. There are a couple of things that will slow you down right off the bat. For one, your car drives relatively slowly compared to the vehicles in other video games. Your acceleration and steering is partially controlled by the game so you avoid damage. You are required to sleep in order to level up. Passive boosts are obtained by eating at a diner or camping underneath the stars. The only way to earn money is to take on hunting quests or side missions that might not always suit your tastes. And you will often be discouraged to go out walking or hunting at night because of high level monsters.

This irked me in the beginning because much of my energy and excitement in discovering the vast world of FF XV felt wasted whenever the game slams the breaks and asks me to slow down. It’s certainly ironic, given that the name of the game is Final Fantasy and that many of the previous titles of this series were definitely far from reality. What was the point of forcing us to go through a semi-realistic experience when gamers often game because of our desire to escape reality? What was the point of slowing us down if you have one of the most beautiful games out there? The answer became clear around 12 hours into the game when I finally fell into the rhythm of the game. It was so we can enjoy every bit of it.

All of the elements that slowed me down either has a purpose or a meaningful reward. Stopping to sleep did not only mean that I can face the constant onslaught of enemies as a more powerful character, but also that I can collect myself mentally. Most of the time, as you are wandering around, you will always be bombarded by imperials, and while you can escape them easily if you run and duck out of the danger zone, the extra EXP will always be worth it.

Driving, instead of constantly using Fast Travel, opened up opportunities for more lighthearted banter among the friends and more insight into the world and lore of the game. There will also be moments where you can just stop and look at the beautiful vistas or take a moment to appreciate how real and alive FF XV’s world is compared to the previous games.

Talking to the owners of local diners or walking around and taking quests from random strangers made me actually pay attention to what was present in the area and not just brush off the little icons on my map. There will be random encounters of wild and wondrous creatures if you look hard enough and the gil rewards are generous as well. The game’s combat is also a definite highlight. The simplified yet intense combat made the grueling adventure much more fun for me. Some may find it insulting that only one button is used to pull off the combos, but it’s enabled some of the fastest and smoothest attack chains I’ve ever seen. That won’t be enough when you’re in the middle of a battle with dozens of enemies, but that’s where your team backs you up. While you can’t control them unlike most of the previous Final Fantasy games, your party can handle themselves well and you gain more edge when you work together. It’s also during the many battles you face that your party will engage in more friendly banter and motivational cheers, and while it’s repetitive, it’s still an enjoyable sight.

As a side note, if another Final Fantasy game were to be released with this style of combat, I’d like them to also incorporate Dragon Age’s hybrid strategic combat.

Finally, what makes slowing down in the game all worth is the character development that you get to witness. The more you play the more you get opportunities for you to understand more of Noctis’ and his bonds with his friends slash bodyguards. Occasionally, the game will throw secret cutscenes that will partially reveal one of the four characters’ backstories, insecurities and passions. Going on different missions and completing the odd jobs will also help Noctis better understand and connect with his world outside the palace. Some might be put off by the fact that the characters were not fleshed out more in the main cutscenes so we can empathize with Noctis’ situation better. But honestly if the game did that then the whole narrative would just become messier.

A shaky story with a strong ending

Which brings me to my next issue about FF XV. It took a decade to bring FFXV to life, so I understand if the narrative wasn’t given much focus along the way. It’s not that the story was severely lacking, but some of the major plot points and elements weren’t clearly defined, making it slightly difficult to understand or empathize with the way Noctis is handling his new responsibility. The story in its entirety wasn’t short of epic moments. This is Final Fantasy after all and you can expect some grandiose scenes, entrances, and battles. But the narrative definitely felt disconnected during the first half and it felt like there were a few essential pieces missing to tie everything together.

The game assumes you already know the background of the world right at the beginning of the game and that you will instantly empathize with the characters. While you can probably read the lore during the tutorial, and you can watch the supporting anime and movie to get a better grasp of the story, I would still prefer that the game would actively pull me into the narrative and build a strong foundation to gradually build me up for the second half. Instead, you get a couple of oddly paced cut scenes and in-game pieces of lore to connect the dots like you would a Dark Souls game. That being said, the second half of the campaign definitely kicked things off into high gear once the world closed in and the path became more narrow and linear. This is where we see a more emotional and relatable Noctis, prompting us and pressuring us to see the story through and through at a faster pace.  Even the atmosphere of the game shifts from this fun joy ride into a gritty, dark, and sad train wreck. The story in the second half is aptly accompanied by a string of battles and trials that increase in brutality as you trudge on. With a brilliant and annoying villain bringing in a couple of crazy twists here and there, it becomes easier to ignore the first half’s mistakes and race towards a satisfying ending.

After you finish the game, you can go back and do the tougher dungeon runs and take on more difficult adventures and you won’t feel as if it’s just extra content thrown out there for nothing. There’s no shortage on the meaningful and fun action that a gamer can still do once the story is over. There are still secrets to uncover, weapons to collect, and dungeons to power through.

And the good news is that there is more to come. There have been announcements that the next patches will introduce more content and it will reveal more about the characters which is something that I’m definitely looking forward to.

It’s the way that Final Fantasy XV’s elements influenced the pacing that gains the most praise from me. FF XV did the unconventional and no doubt there will be gamers out there who will be frustrated and confused about the concept. While it still needs refinement, there’s no doubt that FF XV’s combination of gameplay, world, and even appreciable characters has done a great job in compelling gamers to play, immerse themselves, and push them forward without relying on its story.

If you haven’t played the game yet, I highly recommend that you get it now if you want a fresh and fascinating gaming experience. There will be a lot more content in the future patches of the game and I know it will be a long while before I get tired of it. – Rappler.com